What else is going on at 2011 Detroit Auto Show?

Detroit – Wandering the floor of the North American International Auto Show is a bit of treat before the crowds show up on the weekend. In addition you get to see some of the heavy hitters in the industry mingling with the hoi polloi of the press. While the intention is to focus on BMW and its competitors there are still a lot of other things that grab your attention.

The Chrylser 300 does have a significantly better interior than the previous iteration, however the rubber like feel of the dash covering is still not quite as good as the best. But the 300 is reintroducing ‘tailfins’, subtly but nevertheless . . . The only question is whether or not this will start another tailfin war among stylists.

Cadillac is proud of its CTS-V racecar for the SCCA Word Challenge. Sporting a ‘Piet Mondrian’-like paint job the CTS-V carries on a tradition of postwar Cadillac racing that dates back to the 1950s with Briggs Cunningham’s effort at LeMans.

Subaru has a WRX STi on display that touts it’s 7:55 Nuerburgring time. Competition for the 1M, with easy access to the back seat.

The jewelry looks good on the Bentleys. The flying wing logo adorns the trunk (or should we say boot) and the hood (bonnet?).

The Chevrolet display included a lovely old touring cars from the 1920s as well as its optimally sized Cruse. Notice the acetylene lamps on the touring car. Not much light for a lot of effort. Technology is good.

And speaking of technology, the Schaeffler group and ZF are in attendance and showcasing the underpinnings that make modern cars possible. For example Schaeffler supplies the bearings for the ZF eight speed transmission. And ZF has a neat cutaway of the power take off on its 8 speed auto for driving the front wheels in AWD applications.

Tesla was displaying an ‘exploded’ S chassis. What is truly neat about it is the placement of the batteries. They are in a separate tray slung under the body of the vehicle. Weight placed in the best possible place. The electric drivetrain fits neatly into the space occupied by differential and axles in a conventional car. 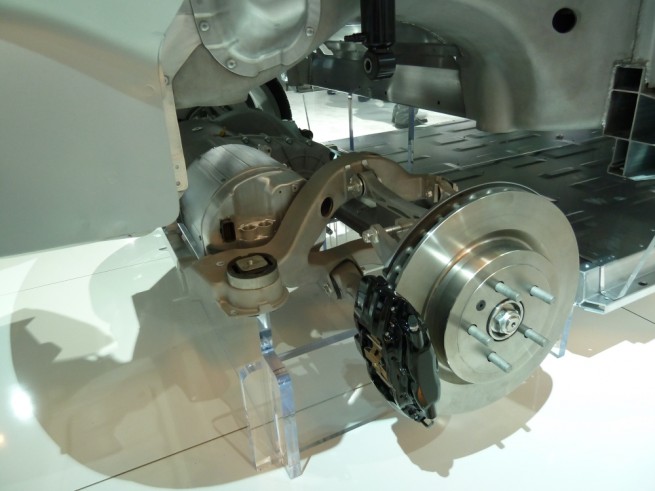