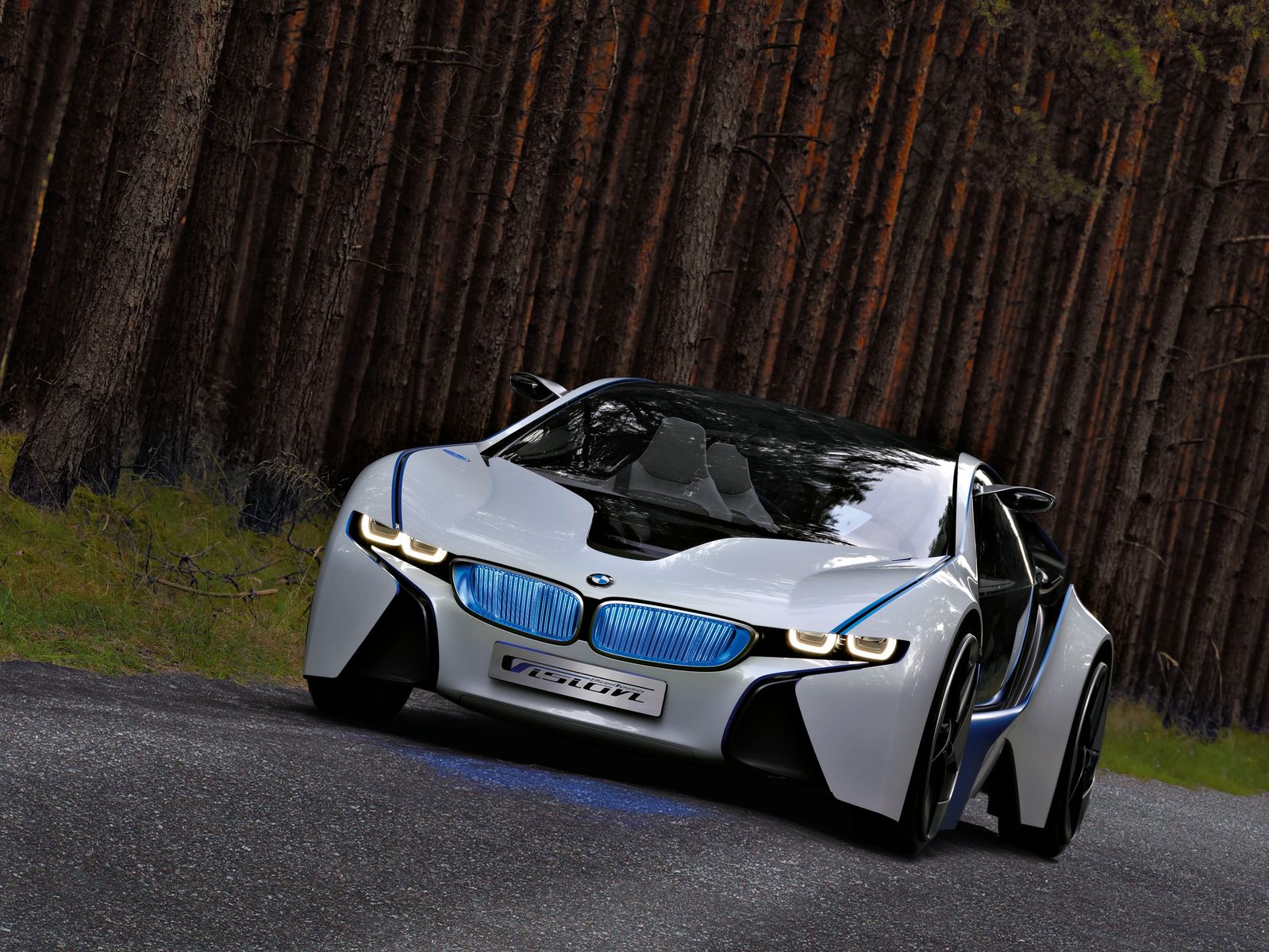 Before you sign the order for your BMW Vision enviro-supercar, you’d be well advised to check out the latest offering from Stuttgart. It appears that Porsche has their own unique “vision” of the consummate planet-friendly supercar, and it’s called the 918.

How do they compare? Whereas the BMW Vision keeps a strong focus on efficiency over all-out performance, Porsche’s 918 keeps performance squarely in the cross-hairs. Let’s look under the hood – err, mid -engine cover for starters.

BMW’s Vision utilizes an ultra high-tech 1.5 liter 3 cylinder diesel for propulsion, augmented by two electric motors, one ballasting the front of the car while powering the front wheels, the other mounted aft, adding power to the rear wheels. The 1.5 liter turbo diesel produces a mind blowing 163 hp and 214 lb-ft of torque channeled directly to the rear wheels. For those paying attention, that’s a stratospheric 108.7 hp/liter – from a Diesel! This power output is no small feat of engineering. Moving on to the electric propulsion, the front mounted electric motor adds 80 hp and 162 lb-ft of torque. For bursts of full acceleration, this front electric motor can muster 112 hp for up to 30 seconds or 129 for a maximum of 10 seconds. The rear mounted (read: aft of rear axle ala Porsche 911) electric motor spins out 33 hp and 214 lb-ft of torque – this power is also channeled to the rear wheels. A collective 325 hp (mindful of the 10 second power burst) is tasked to propel the Vision’s modest 1,450 kg (3,197 lb) curb weight, offering a power to weight ratio of 9.8 lb/hp. 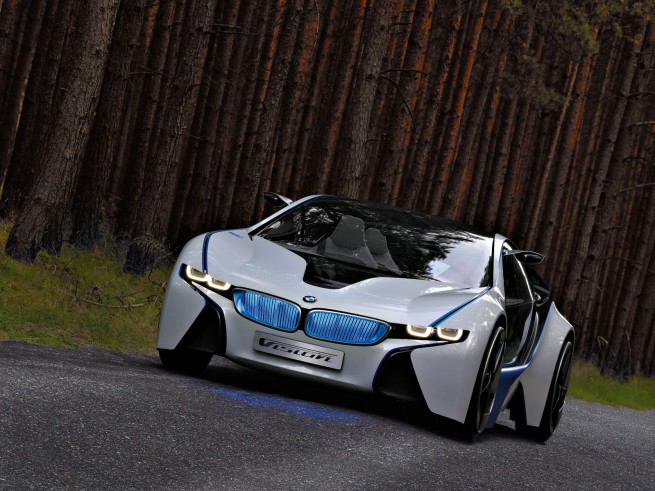 BMW’s Vision supercar makes takes advantage of Munich’s wealth of F1 carbon fiber technology to produce what is essentially a carbon fiber car. The chassis consists of a carbon fiber monocoque using extensive carbon fiber panels for aerodynamic effect. The Vision’s final drag coefficient though the air is an elusive 0.22 cd, allowing incredible consumption of only 3.76 liters/100 km (62.5 mpg) and only 99 grams C02/km. BMW is the first to bring a layering technique to automotive design, both on the interior and exterior of the vehicle.  0-60 times are expected to mimic M3 performance at approximately 4.4 seconds. 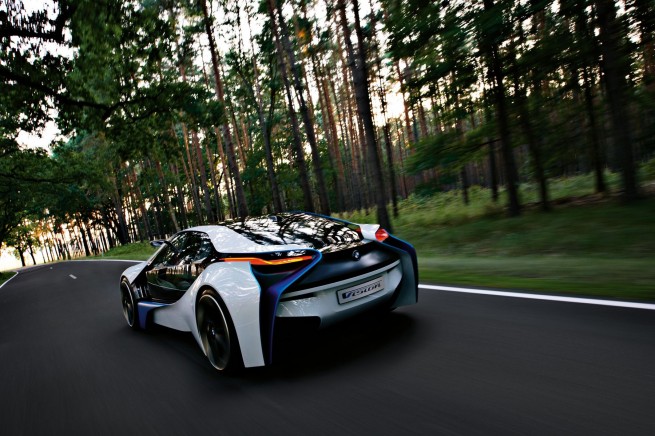 Turning our attention to the Porsche 918, the figures are drastically different, yet the mission remains the same. A race-proven (RS Spyder LeMans car) 3.4 liter naturally aspirated V-8 produces 500 horsepower. Three additional electric motors collectively add 218 horsepower for a combined output of 718 hp. Tipping the scales at only 1,490 kg (3,284 lb), the 918 gives little to the BMW in the weight department, while upping the ante for out-right engine power. Result is a staggering power to weight ratio of only 4.57 lb/hp, with 0-60 times expected around 3.2 seconds. The Porsche is clearly faster, and it doesn’t hide its mandate, but here comes the shocker: Porsche’s 918 is destined to achieve impressive consumption figures of only 3.0 liters/100 km (78 mpg) and 70 grams C02/km. Porsche today unveiled the 918 RSR race car as a test bed for future production car technologies – the 918 features a 563 hp engine that spins to 10,300 rpm, augmented by two hybrid drive systems, one using electric motors and batteries for energy storage and the other using a flywheel to store energy under braking, spinning up to 36,000 rpm. Total power output on the 918 race car is 767 hp.

Now which car has the emphasis on green? Clearly the BMW’s mandate is more environmentally focused based on its design approach while the Porsche gives nothing up to performance.  The Porsche uses a more conventional gasoline engine in partnership with its three electric motors, but the end result is a claimed 15 mpg advantage over the BMW’s milage figure. True, both cars are yet to make their street debut, and we may find different real world figures that tell the story otherwise – but for now, we see impressive engineering in both cars.

Which one is the exotic? While few people would place “Diesel” and “sexy” in the same sentence, that may change with BMW’s Vision car. With a horsepower per liter ratio the envy of most gasoline internal combustion cars, BMW’s new Diesel is a true tour-de-force. Engineering at this level is exotic, no matter what fuel you’re burning. Flowing carbon fiber lines are nothing short of seductive, and this sports car reeks of technology. This BMW is one sexy “Vision.” On the other hand, Porsche’s 918 enviro-supercar is vastly more powerful – producing over twice the total horsepower figures of the BMW, while only losing 87 lb to the BMW.

Ultimately, the choice between these two enviro-supercars will come down to taste. Both bring incredible technology to the hybrid car car arena, and choosing between the two is to chose between an Omega and a Breitling.