Last month, BMW took the covers off their newest Touring model in the 5 Series family. Built under the platform name F11, the new 5 Series Touring brings the challenge back to the Mercedes-Benz E-Class Estate model.

The design of the new BMW 5 Series Touring is characterised by a high level of individuality with regard to its proportions and surface design. Its uniqueness is reflected by dynamic and powerful looks. With its long bonnet, short overhangs, the longest wheelbase in its segment, the stretched silhouette and a steeply inclined roofline, the new BMW 5 Series Touring displays a new level of elegance.

The Touring model continues to offer an impressive cargo capacity covering the customer’s demands for a model in this segment. 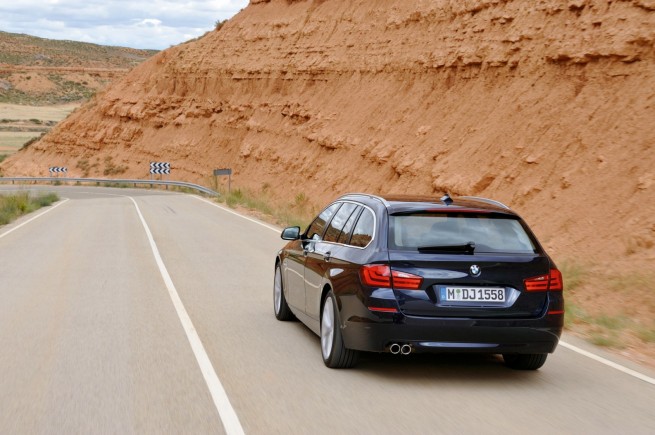 The luggage compartment has a capacity of 560 litres. If desired, an increase in capacity to a maximum of 1,670 litres is guaranteed by 40:20:40 split folding rear seats, which are unique in this segment. The backrest angle is variable by up to 11 degrees. The backrest can be folded down using two control levers inside the luggage compartment, the loading space cover of which is automatically lowered when the tailgate is closed. The separately opening rear window automatically swings upwards at the push of a button.