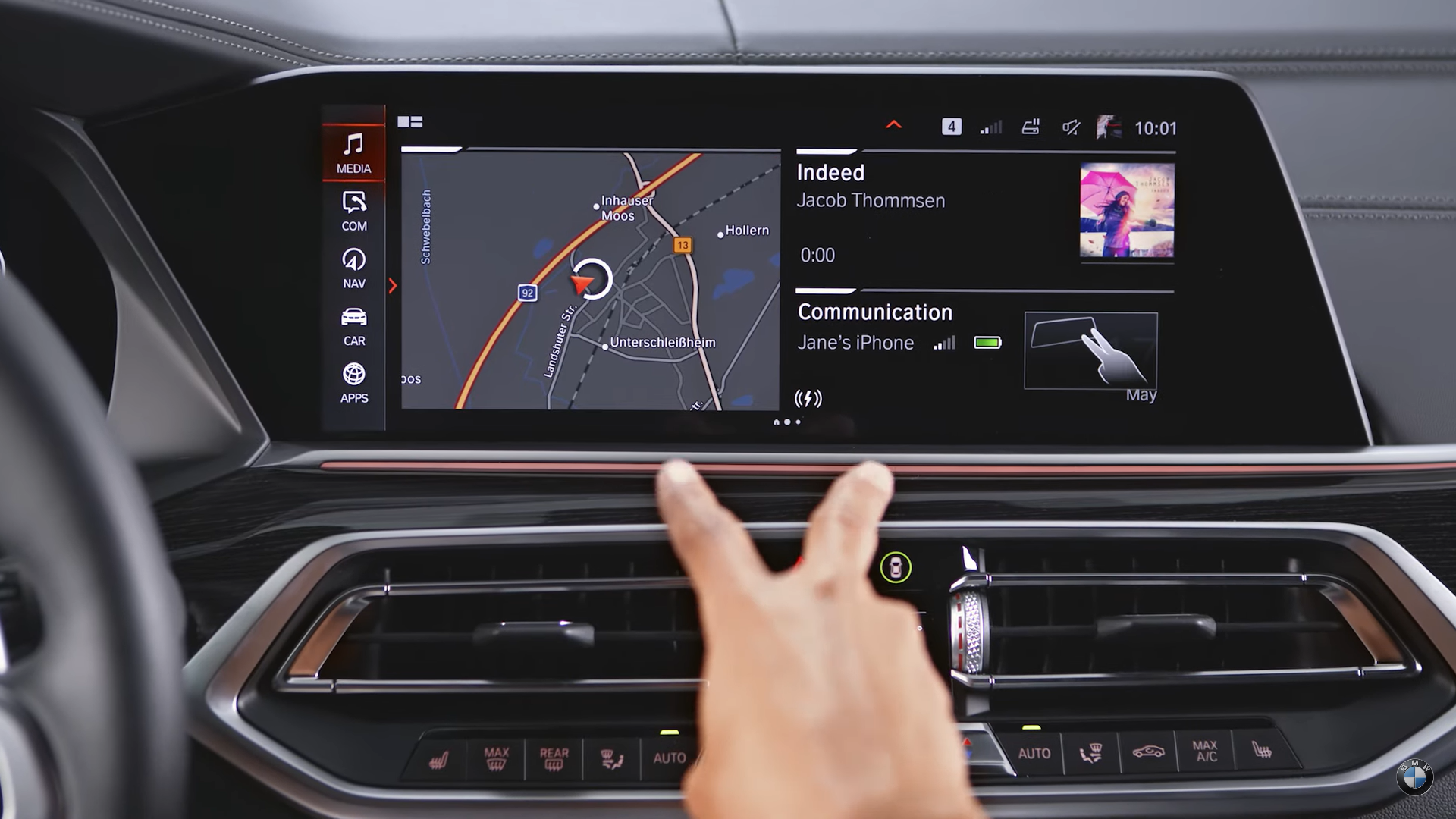 Gesture control started making an appearance in BMW’s cars back in 2015, with the then-new 7 Series. It’s now trickling down to most BMW models and will likely soon be standard equipment in every BMW. Gesture control was designed to keep drivers focused on the road. The idea is that you don’t have to reach or look for a button, keeping attention where it needs to be – on driving. Love it or hate it, it’s technology BMW seems committed to keeping around – and with good reason.

Gesture control is easy to use – once you’ve learned to use it correctly. Remember that the sensors for gesture control are above you, looking down at the space where the iDrive screen and air vents are.  The image below does a good job of illustrating where to place your hand.

Another helpful method I’ve used trying to activate gesture control is to imagine two perpendicular lines. One extends from the top of the gear shift lever (or bottom of the mirror in cars without conventional shifters). The other one intersects from the top of the air vent, or bottom of the iDrive screen. Generally, that space in the middle is where you’ll encounter the most consistent success when trying to operate gesture control.

You also want to take extra care to ensure your whole hand is visible in that “box” – basically, from the wrist forward. The sensor is scanning for a full hand gesture, so it’s important to give it the clearest communication you can.

Common Gestures and How to Use Them

Gesture control launched with somewhat limited usability. But today, there’s almost a dozen different things you can do with it. The simplest one is accepting a call – simply extend a finger towards the iDrive screen and then back again. You can also use this to confirm pop-up menus. Rejecting a call – and, cancelling those same pop-up selections – is easy too. Just wave your hand to the right. A third, lesser-known use of this “dismissing” gesture is canceling voice commands.

One of the most recognizable – and easy to perform – gestures is the volume control. Moving your hand in a circular motion with your index finger extended will allow you to adjust the volume level of whatever active media is currently playing. Clockwise motion will increase the volume; counterclockwise will decrease the volume. It takes one entire circular cycle for gesture control to pick up on it, so be patient. A common mistake here is using just your finger to activate it. It will usually still work, but it’s much more consistent with a whole hand motion.

Another recognizable function of gesture control is the “pinch and drag” motion. Make a pinching gesture with your thumb and index finger. Then, move it to the left and/or right. This will allow you to rotate the camera when in Surround View. This is a bit niche, but it’s definitely one of the more impressive party tricks gesture control allows for. It’s also only usable when the vehicle is stationary.

Finally, there are the two “skip” gestures. Holding your thumb stretched out to the right or the left will allow you to skip forward or backwards, respectively. This is a fun – and easy – one to do, just be careful you don’t jab your passenger! It’s also one of the more practical gestures, as skipping a song or changing a radio station is objectively easier by using it. Unfortunately, it’s also frequently activated accidentally – especially if you motion a lot when speaking in the car. 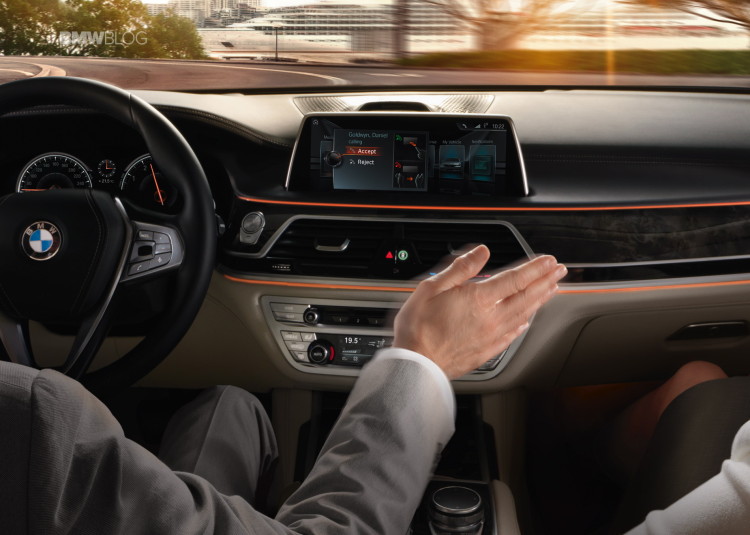 There are also two configurable gestures that BMW has programmed in. The first one is a quick “open-closed-open”. Your hand makes a first for the “closed” part and extends all five fingers for the open part. This should all happen in the span of maybe a full second. The other configurable gesture is “two-finger point”, which is really as simple as pointing at the iDrive screen with your index and middle finger extended.

The configurable gestures are where gesture control’s true potential shines. You can program it to react to them with some seriously helpful things – like muting the audio or turning the control display on or off. One of my personal favorite is assigning a function to start navigation for your home address. 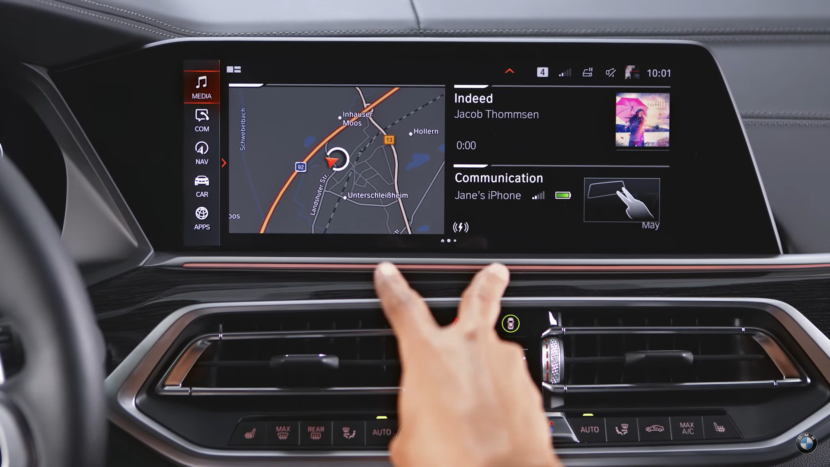 Finally, here’s a couple of reasons that might be leading you to believe gesture control doesn’t work. The most common is that the motion is being performed incorrectly; check to make sure you’re making clear hand gestures. The second most common is that it’s being performed in the wrong area and the sensor can’t see you. Refer to the first section of this writeup and try again.

Allegedly, jewelry and gloves confuse the gesture control sensor. That seems likely, although I’ve never experienced it. Occupants of the vehicle smoking or vaping also impair the sensor’s detection abilities. Hanging things from the rearview mirror can also make the sensor get a little confused. Finally, the simplest option may be to just clean the camera lens – it is after all a lens and will get dirty over time.

The below video is also a good resource!