Video: The Difference Between Original and Fake BMW Brake Pads

Today the world is facing a lot of issues related to fake merchandise. While initially the phenomenon seemed to be limited to fashion items coming from China, today products from all sorts of fields seem to be affected, from iPhones to car parts. BMW is raising an alarm these days, showcasing exactly what you’re exposing yourself to if you decided to buy a similar item with a drastically lower price tag than what your dealer might send your way.

It’s true that usually, when a price seems to be too good to be true, it usually is. Therefore, whenever you see a product that is claimed to be a BMW original at half price or even lower, a big question mark should pop up somewhere in your head. The thing is, sellers of counterfeit merchandise have caught up on this dead giveaway and have raised the prices. Since, as the video below shows, the fakes and originals look exactly the same, we’re not exactly sure how we’re supposed to make the two out. 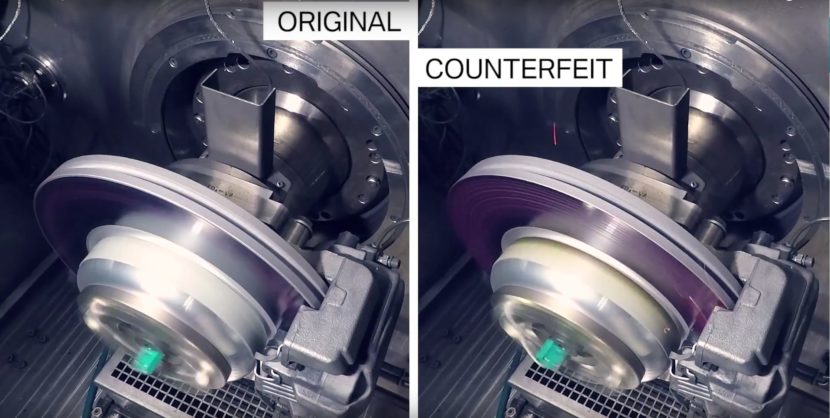 In the short video put together by BMW, we get to see the drastic differences between original and fake brake pads. While the BMW product can withstand the initial brake test on the bench, going through all the simulations, the fake one seemingly gave up after just 3 runs. Not only that but it also caught on fire, something you definitely don’t want to be happening to you, no matter if on the track or while cruising down the street.

The second test implies actually driving a car with the two sets of pads. While the BMW part was consistently bringing the car to a stop in 37-38 meters, the fake pads not only brought the vehicle to a stop slower but also posted worse figures as the run was done again, due to overheating. These are just tiny example of what may happen but the consequences can be a lot worse, depending on the products we’re talking about. What bugs me though is that not even BMW can’t provide a safe method of figuring out how to separate the originals from the fakes before purchasing.

4 responses to “Video: The Difference Between Original and Fake BMW Brake Pads”