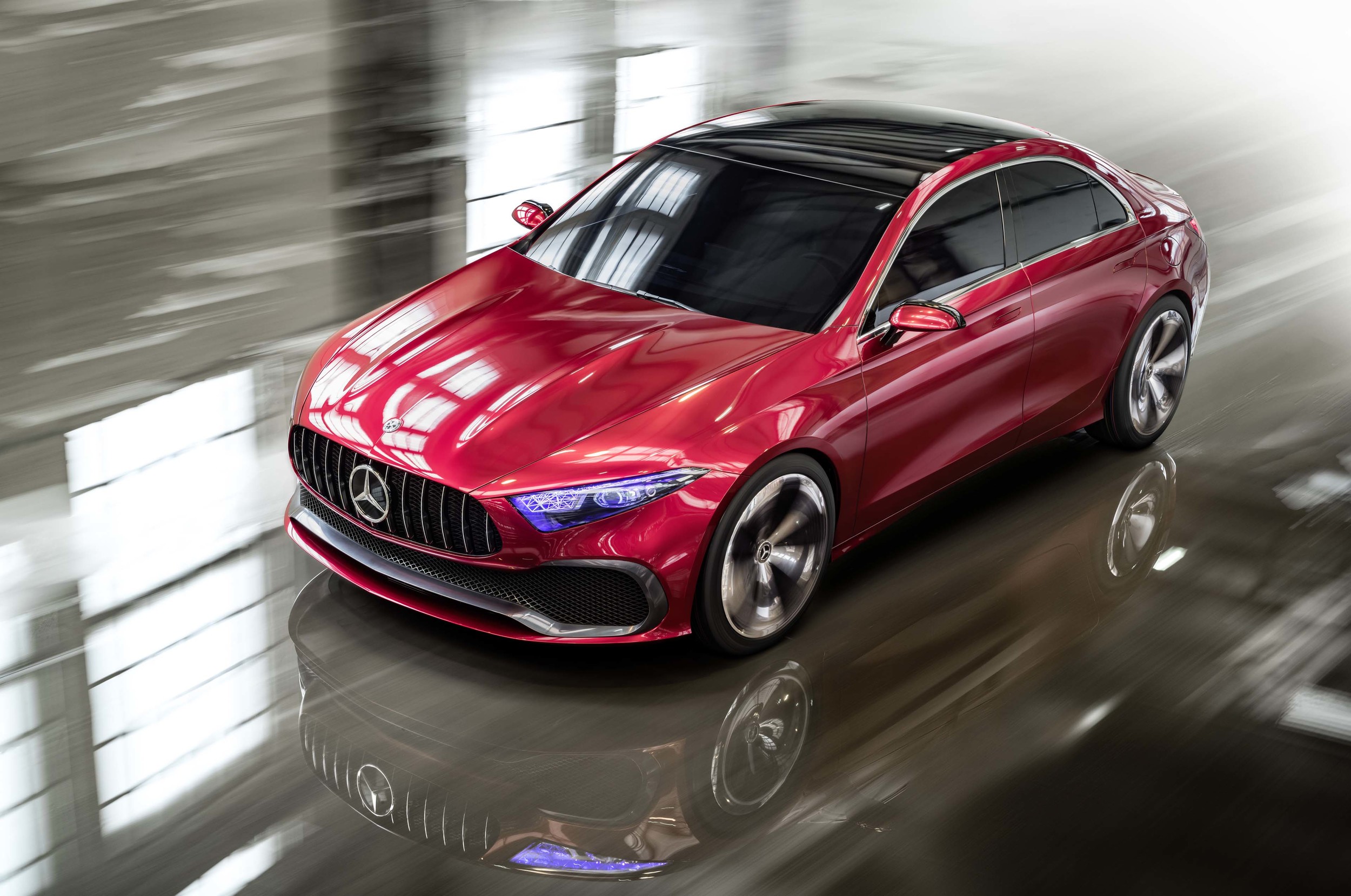 Mercedes-Benz launched today a new concept aiming at the Audi A3 Sedan and BMW 1 Series Sedan. The latter is currently produced and sold exclusively in China, but BMW officials say it is likely to be offered globally when the third-generation 1 Series is launched in 2019.

Dubbed Mercedes Concept A Sedan, the new model will be unveiled tomorrow at the Shanghai Auto Show and it’s scheduled to launch on the market in 2019. 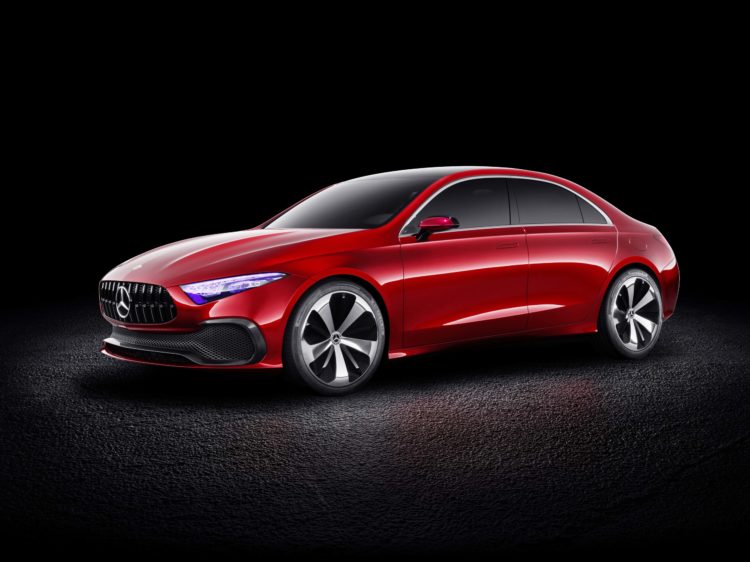 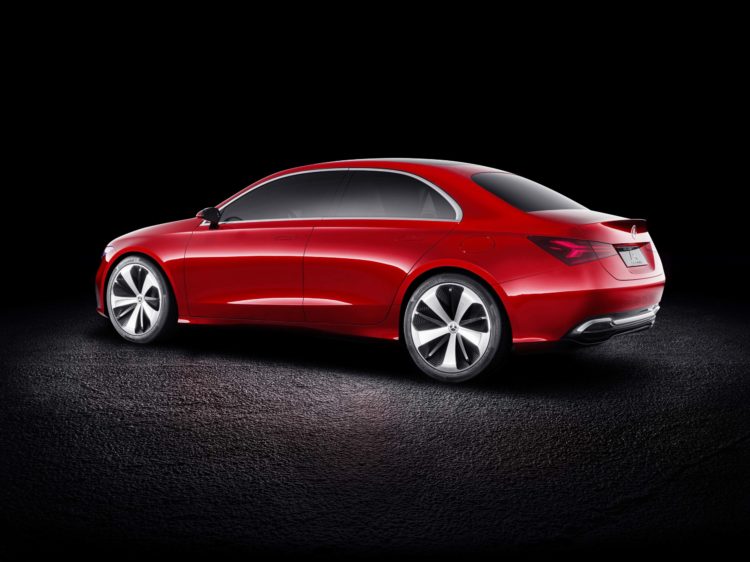 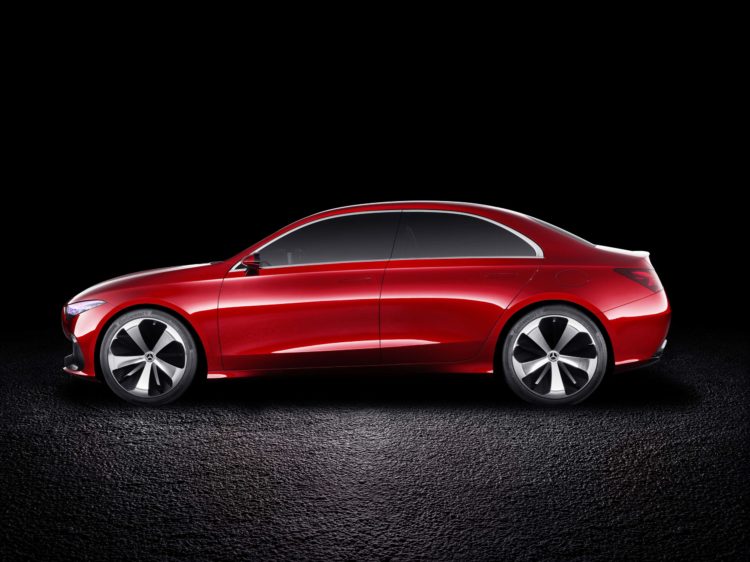 The Concept A Sedan will morph into a production car off the same underbody structure as the replacements for the A- and B-Class, the GLA, the CLA and more, including a small coupe and a convertible. As a concept car, it’s only 2.76 inches shorter than the current production CLA, though it’s 3.66 inches wider and 1.18 inches lower at the roofline.

“Our Concept A Sedan shows that the time of creases is over,” said Gorden Wagener, Daimler (parent of Mercedes) chief design officer. “With its perfect proportions and a sensual treatment of surfaces with reduced lines, it is the next milestone of Sensual Purity and has the potential to introduce a new design era.” 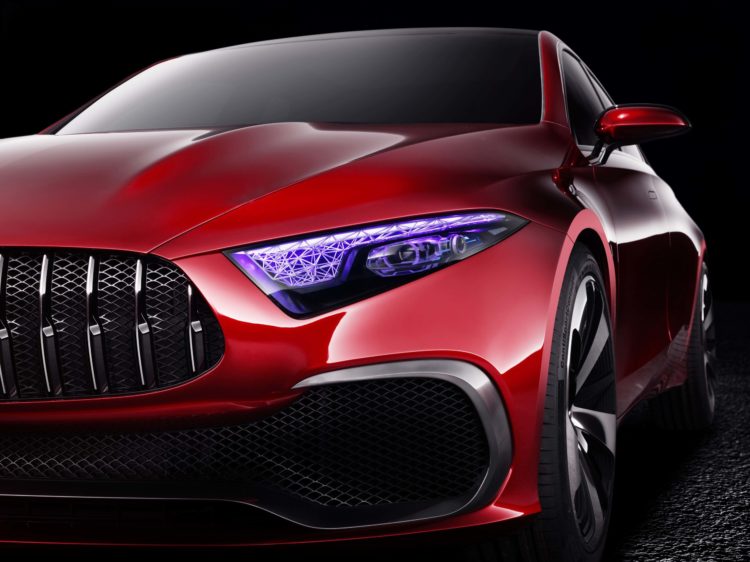 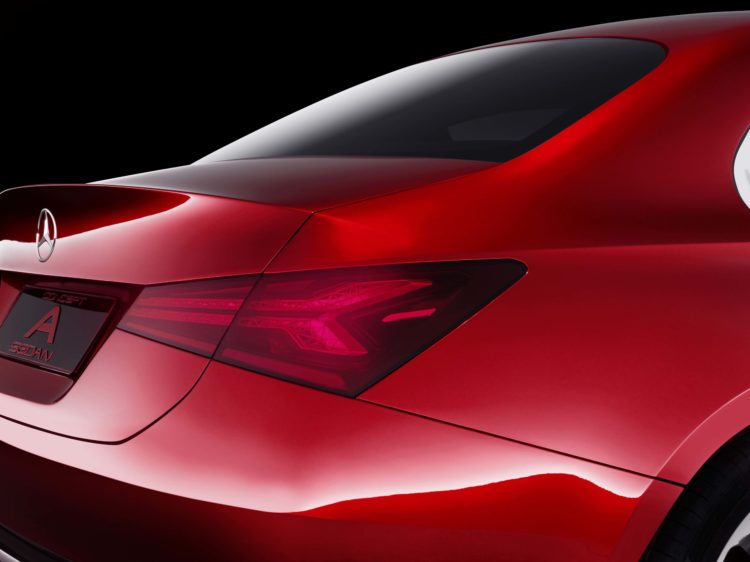 The concept has a higher beltline, and its design is highlighted by the adoption of AMG’s Panamericana grille, with its aggressive vertical chromed bars and a pair of powerdomes on the hood. The grid structures of the headlights are coated with ultraviolet paint, which glows in different colors depending on the light around them.

The striking new look will be shared across the new A-Class lineup as well as other new Mercedes models, including the successor to today’s second-generation CLS due later this year.

The new sedan is set to offer buyers a choice of four-cylinder gasoline and diesel engines, including a close to 400-hp turbocharged 2.0 liter gasoline unit in a range-topping A45 4Matic sedan. 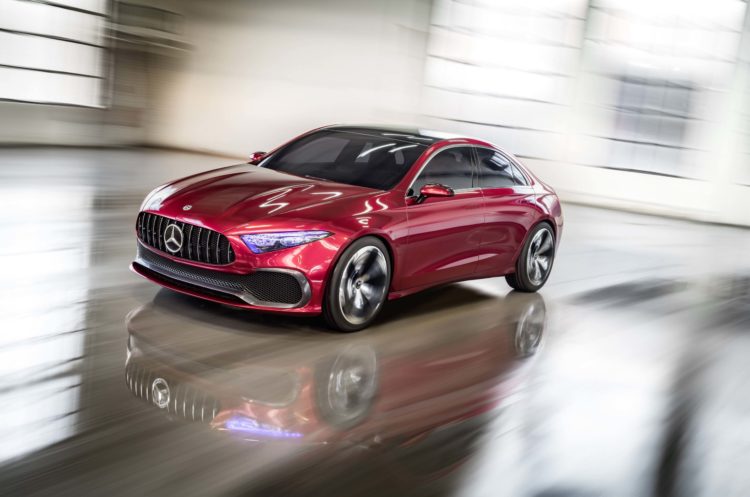 Also planned is a plug-in gasoline-electric hybrid version of the new price-leading Mercedes sedan that insiders say will offer a pure electric range of up to 31 miles (50 km).

Mercedes said the A-Class sedan would be assembled in a joint venture operation with Nissan’s upmarket brand Infiniti at a plant in Aguascalientes, Mexico. However, those plans are now under review. 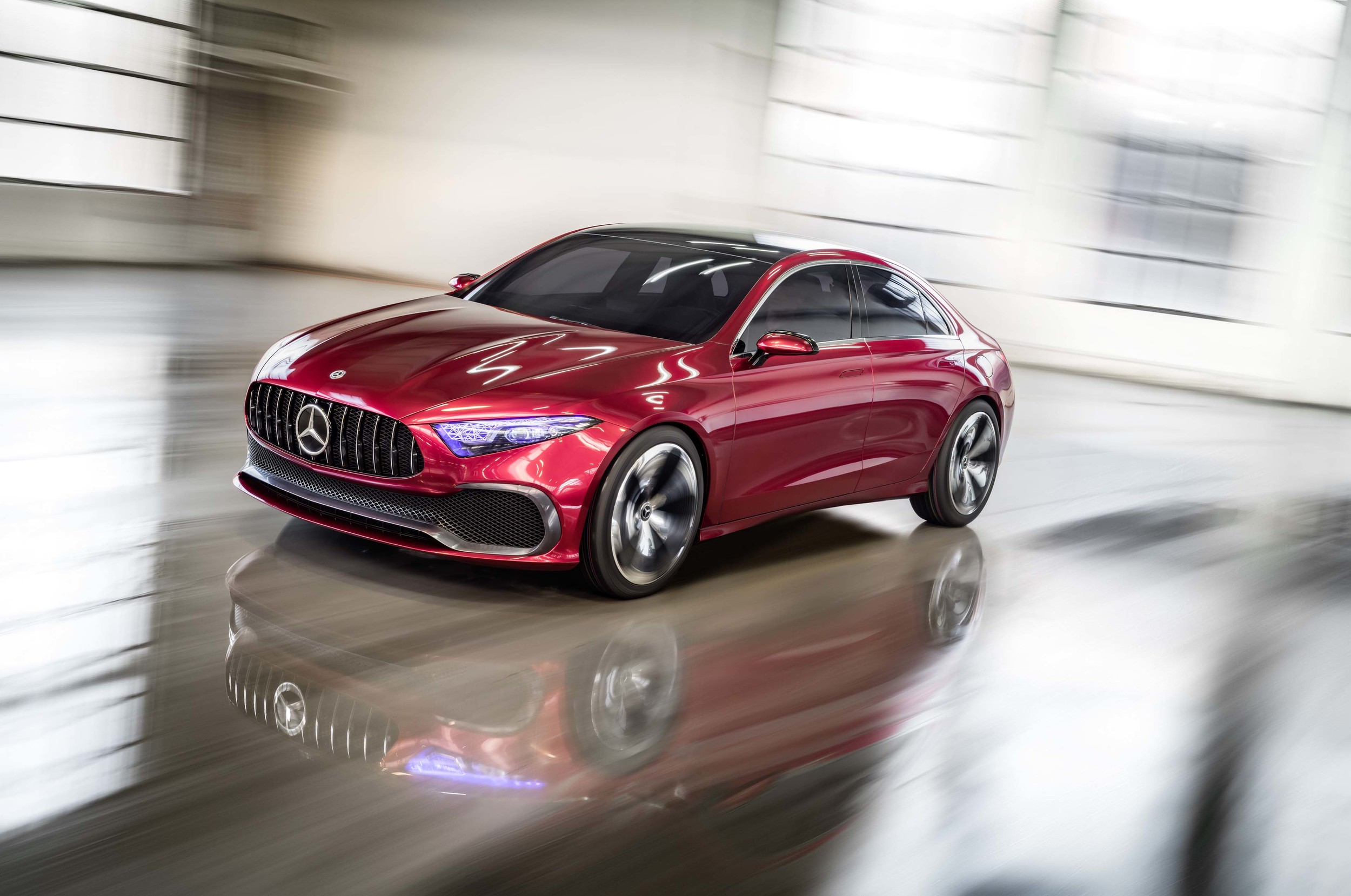 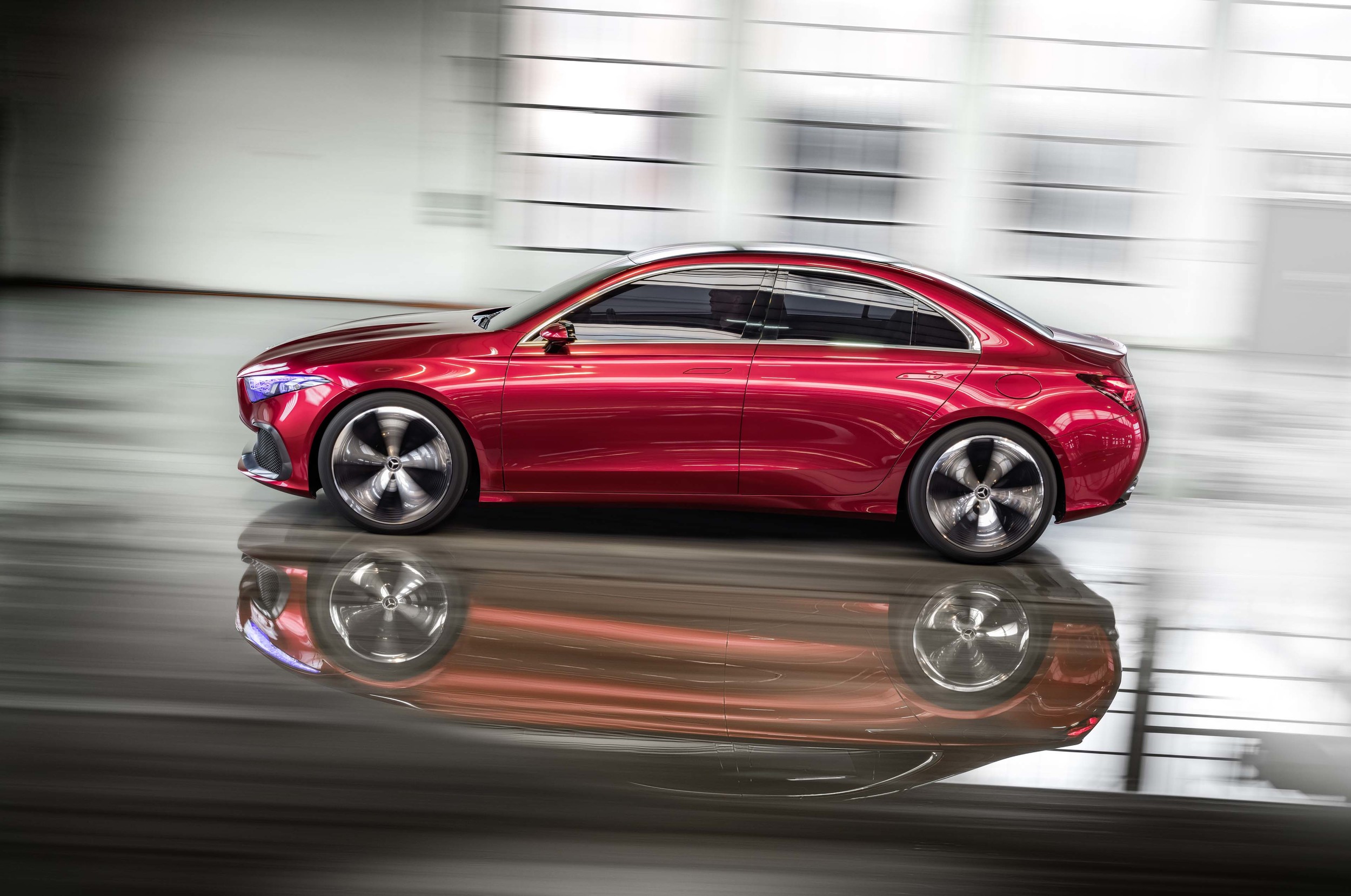 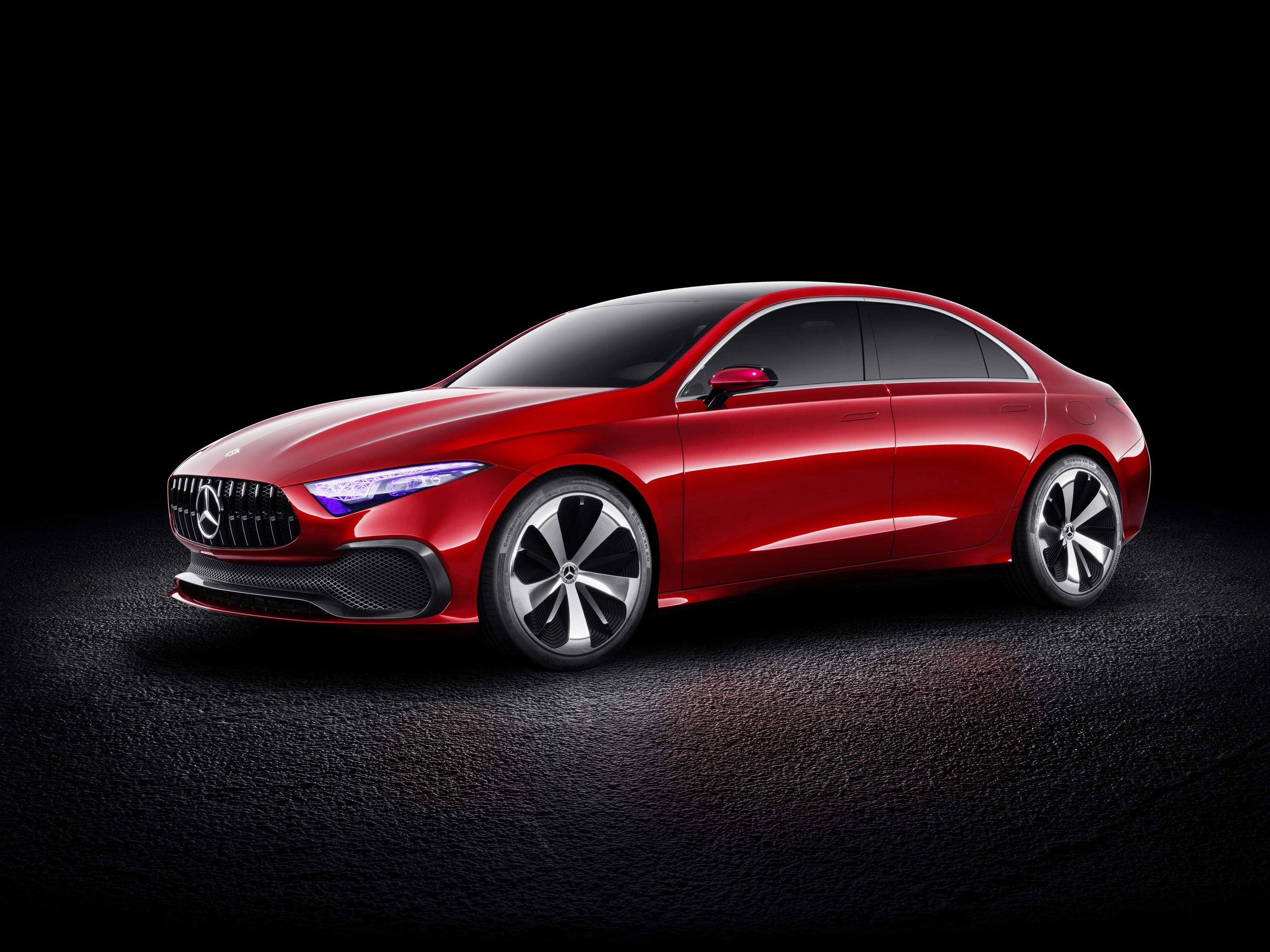 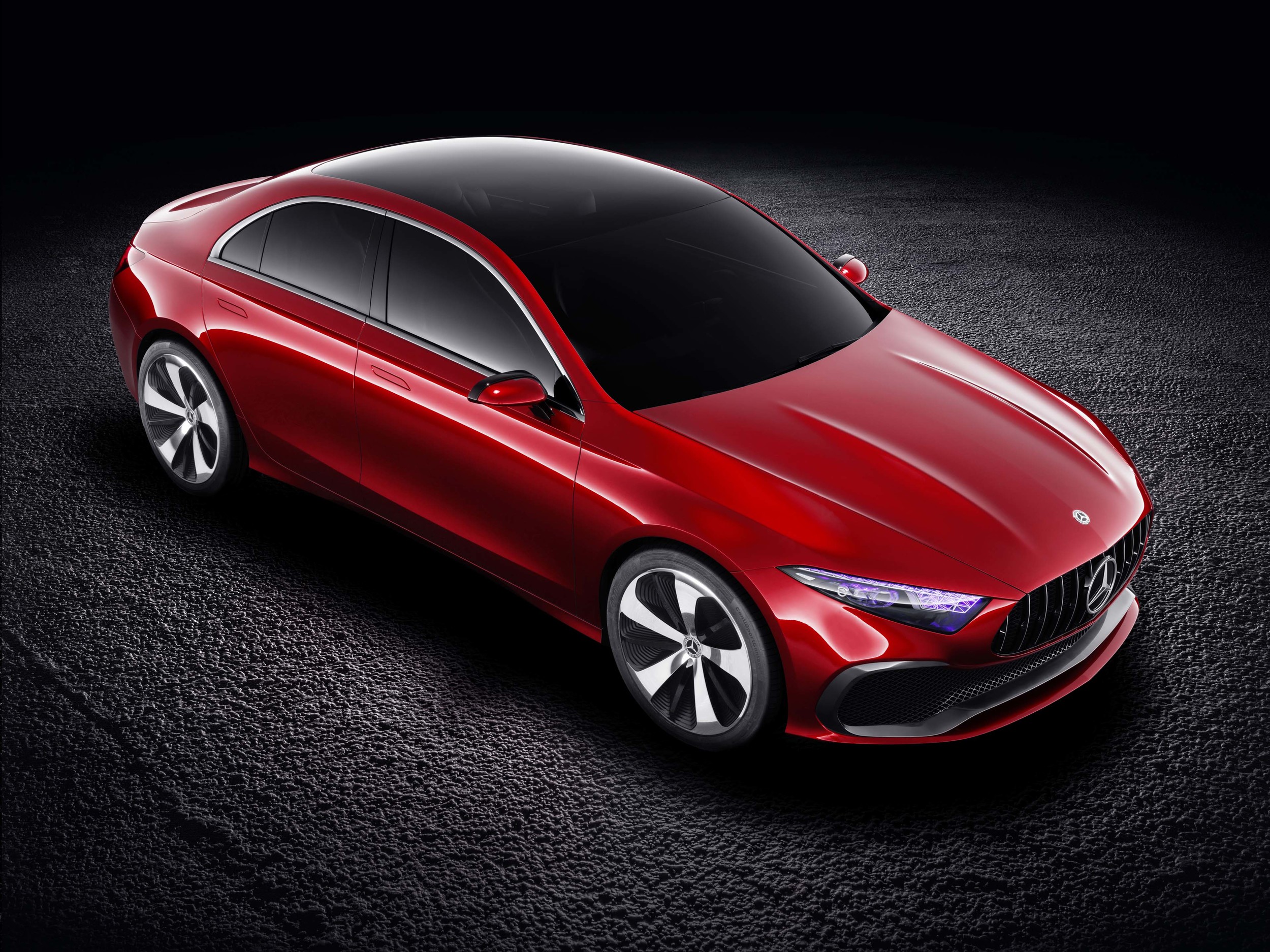 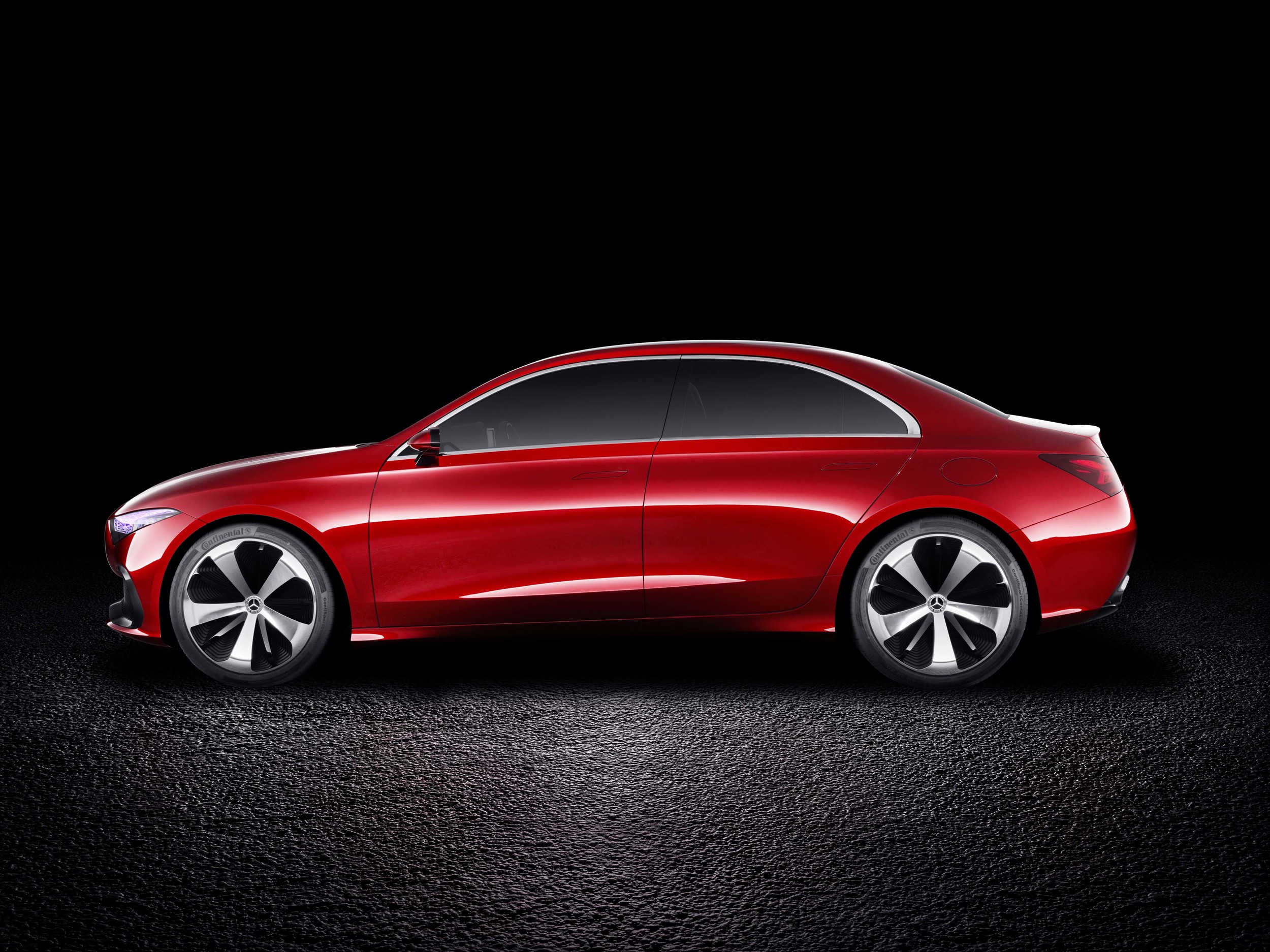 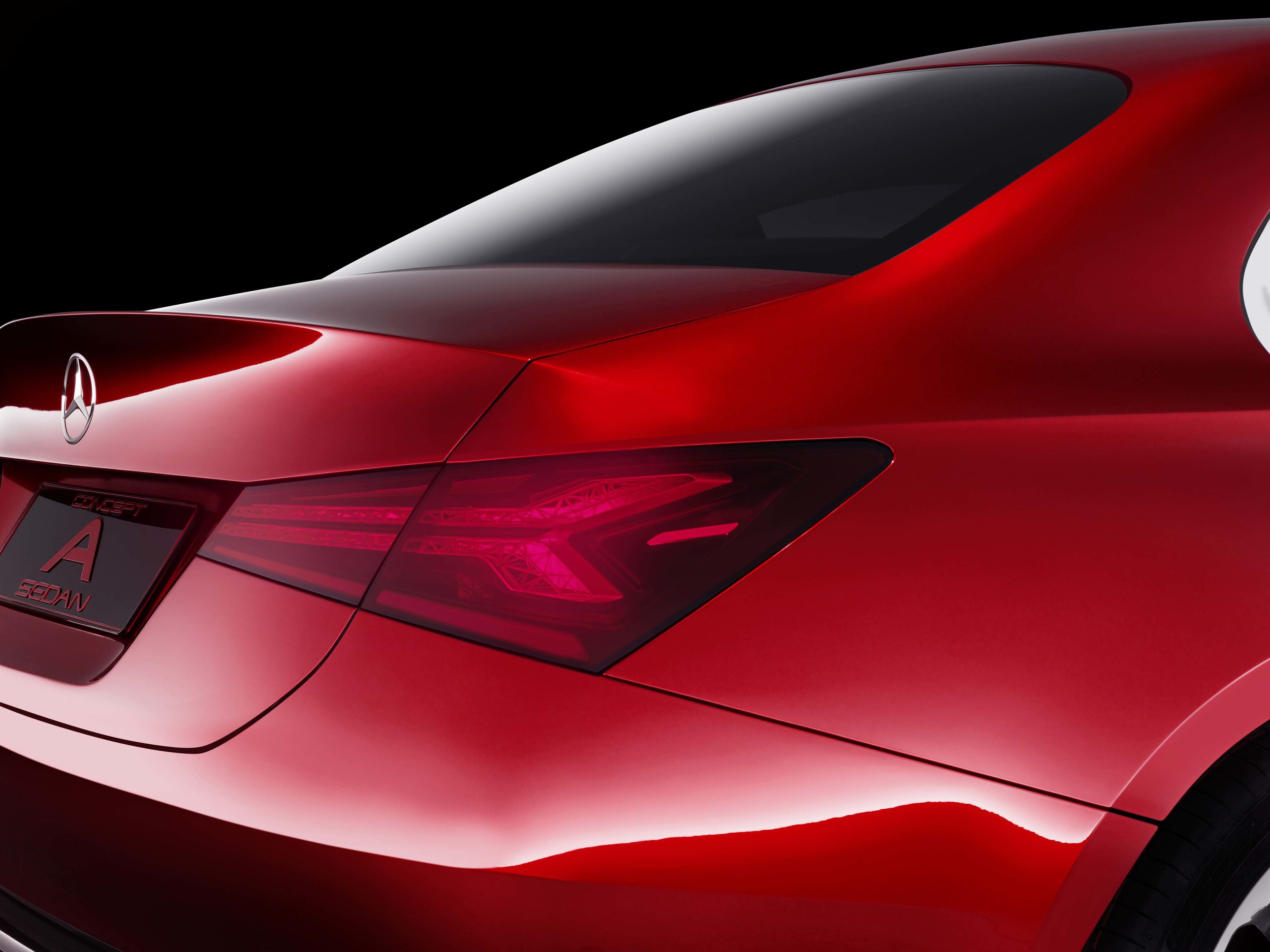 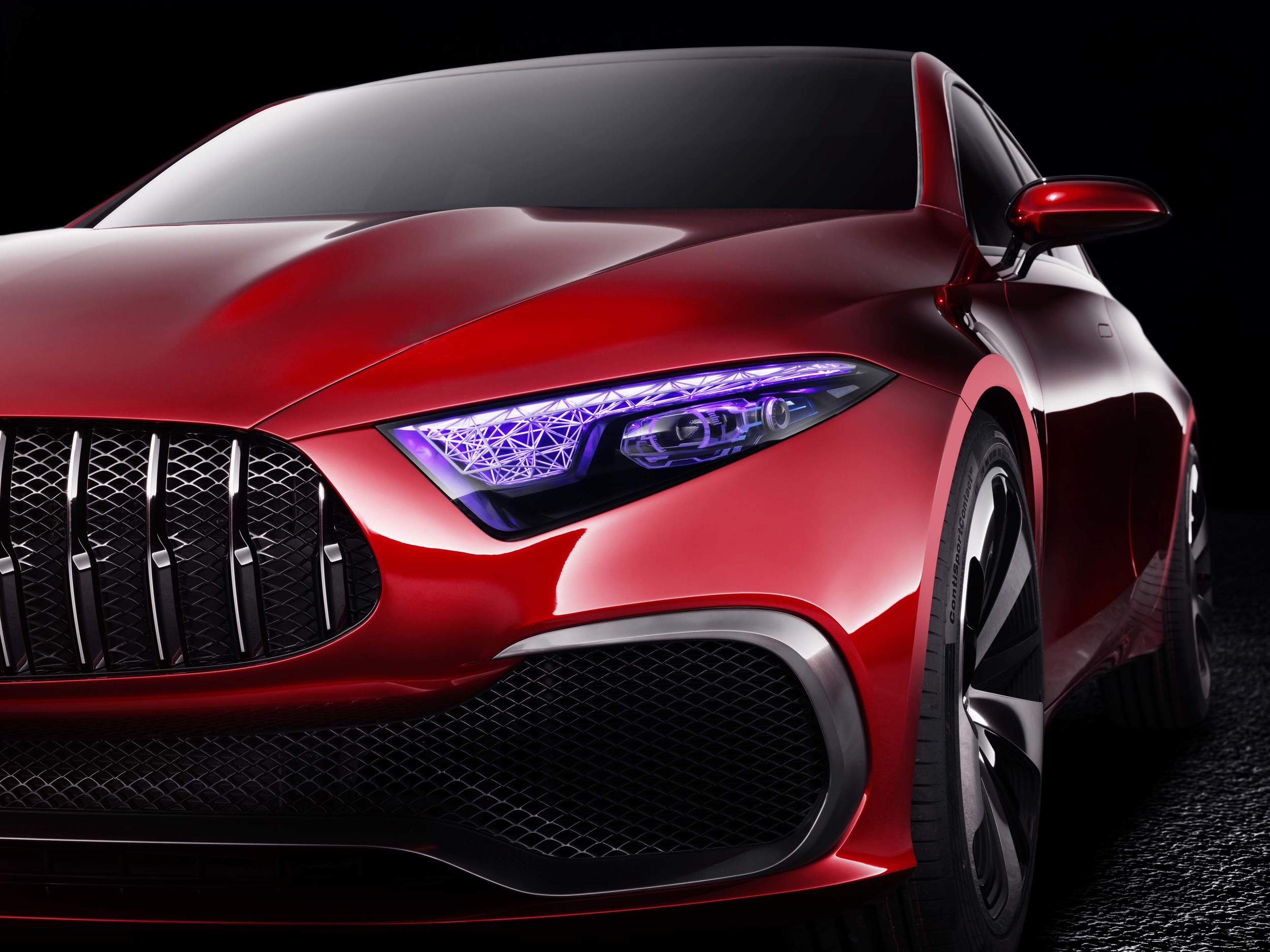