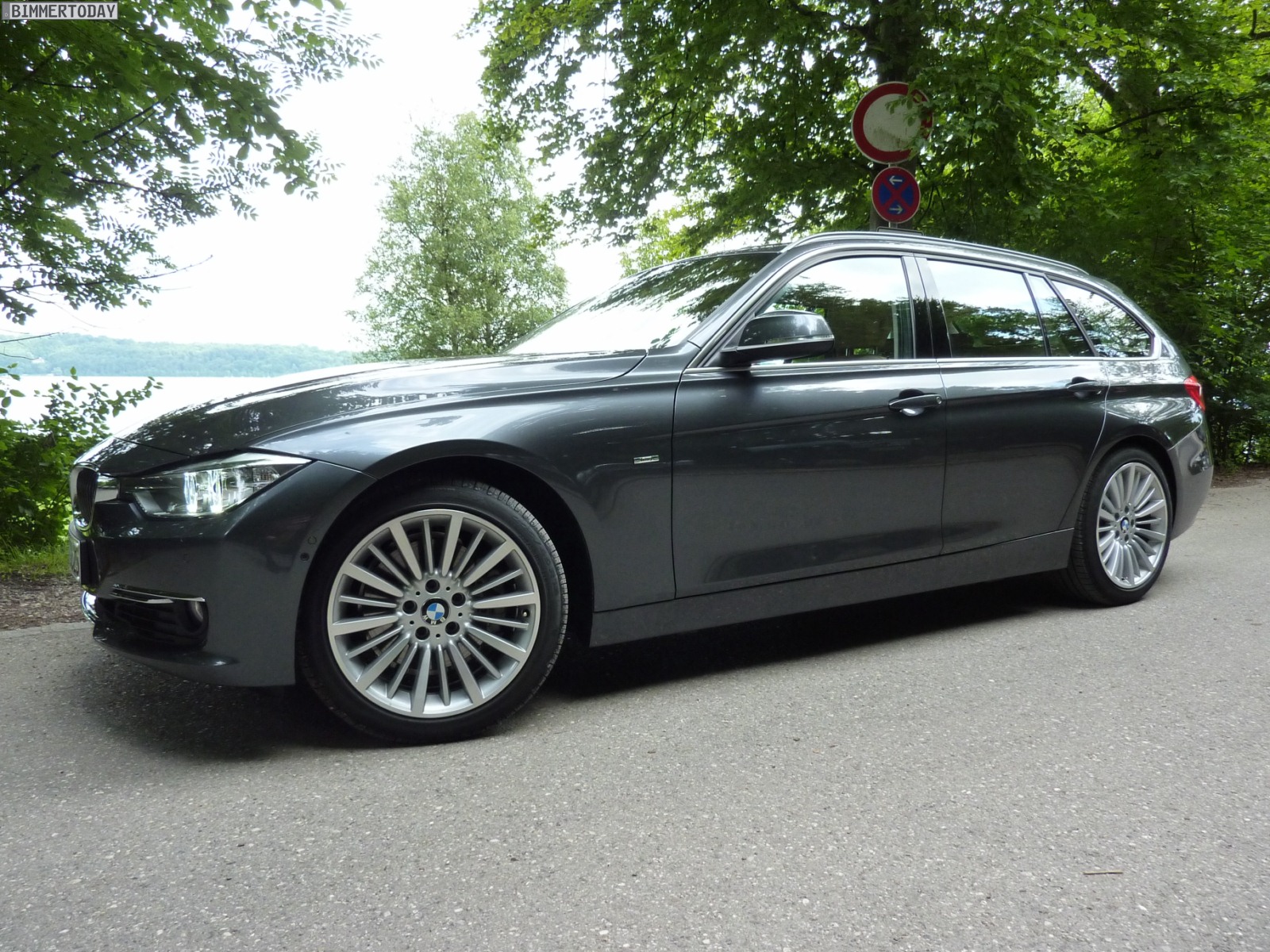 At first glance, the 2013 BMW 328i Touring looks like an evolution of the E91, but after a prolonged drive, the improvements over the previous generation begin to surface. Overall, the new F31 surpasses its predecessor by 3.66 inches in outer length, which in addition to larger cargo space, it offers the passengers more head and legroom.

The sporty touring also has a longer wheelbase, 1.96 inches over the previous model, as well as a wider track (front + 37 mm/1.46 in., rear + 48 mm/1.85 in.), all of these combined give the F31 Touring increased dynamics and ride balance. Despite the larger dimensions, more standard equipment and increase in torsional stiffness by ten percent, the mass weight is kept in check – depending on the model, up to 40 kilograms less than the E91 model. 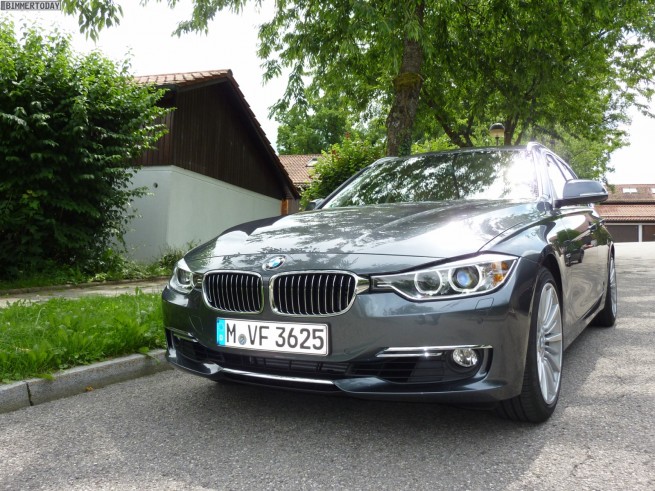 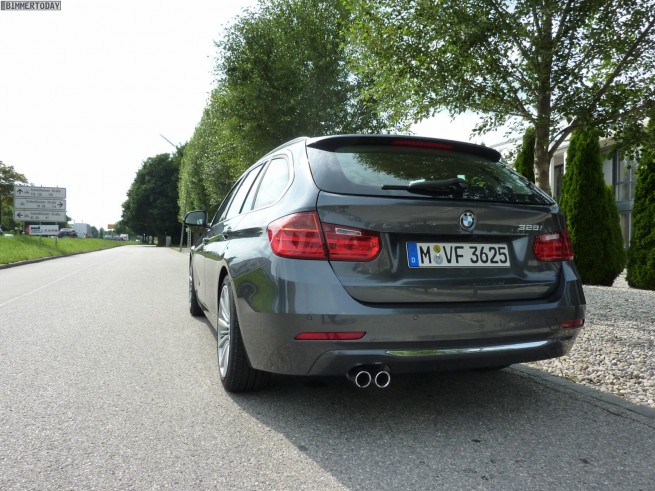 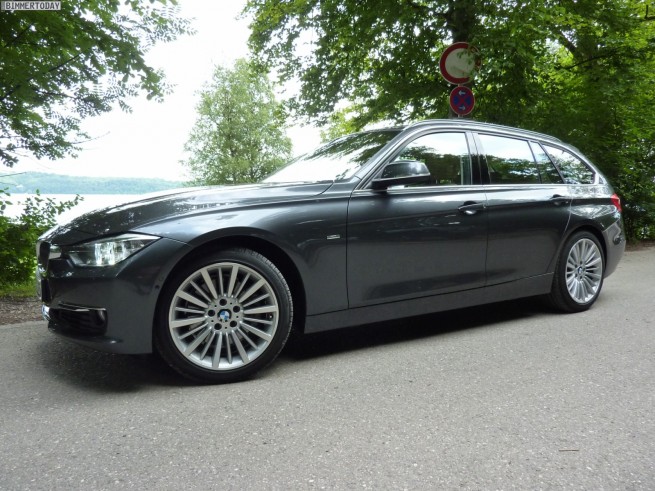 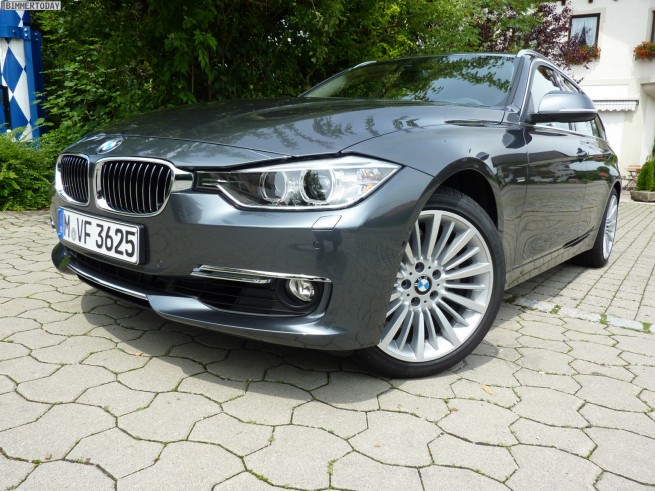 Entering the car and you immediately see a familiar cockpit. The F30 3 Series Sedan interior design transposed itself into the touring model. The Luxury Line we tested, with its materials and colors, shows the noble side of the new touring. The new free-standing LCD display emphasize the premium and luxury look.

Tactile, the steering wheel of the 3 Series Touring Luxury Line is what you would expect from this type of car, its multi-functional controls are intuitive and easily controllable with your thumbs. The optional M Sport steering wheel offers an even more compelling experience thanks to its thicker rim and solid feel.

The new, faster version of the navigation system offers a 3-D representation of the surroundings and over a 125 miles ride it scored high in our test. The higher resolution and a few small improvements make the new iDrive system a completely successful evolution from its previous iteration. For example, the digital section on the right ride of the split screen was reworked and now offers even more information. Font types and faces have been updated as well giving the user interface a more polished look. Owners of the F30 BMW 3 Series Sedan will get to enjoy the same navigation system starting in November of this year. 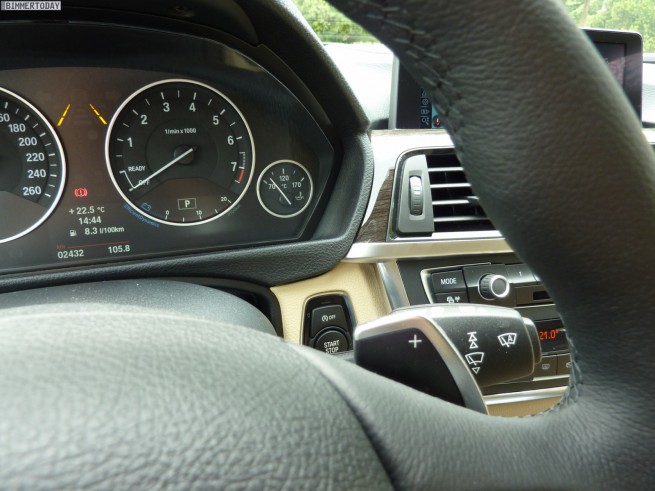 A full-color Head-Up display allows the driver to focus permanently on the road and the updated system comes clearly displays all the relevant information to make the ride as smooth and safe as possible. As seen in our pictures, in addition to the car’s speed and current speed limit, the Head-Up displays now recommends which lane to follow. The iDrive menu allows the driver to determine what information should be shown in the HUD and it is highly customizable.

Under the hood, the 328i uses the new and efficient 2.0 liter turbocharged four-cylinder engine which sends 245 hp to the rear wheels. Acoustically, the engine remains most of the time in the background and its sound is mostly heard only when the driver firmly pushes down on the accelerator pedal. The engine sound, even in this situation, is of course not up to the acoustic levels of the six-cylinder unit, and we find it to be comfortable and not intrusive.

In combination with the engine, the eight-speed sport automatic transmission and its shift paddles on the steering wheel can perform any desired acceleration maneuvers. At the correct speed range, the engine is spontaneous and the driver is not presented with an annoying turbo lag. If you drive in the optimized and environment friendly Eco Pro mode, the acceleration response and gears set-up are tame therefore reaching the desired sprint requires some patience. 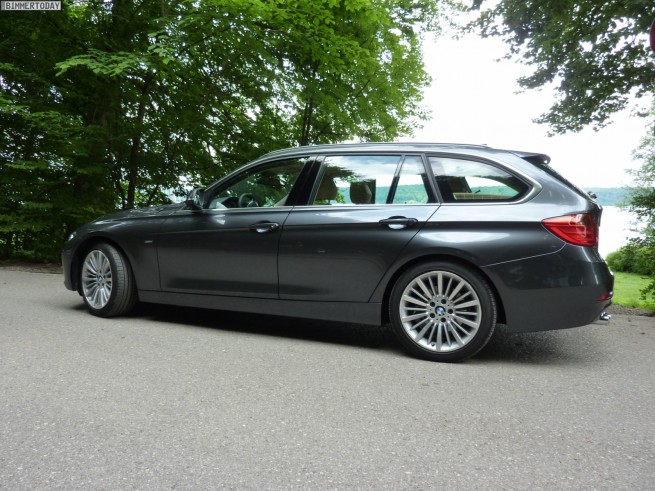 In corners, the 2013 BMW 328i Touring shines even when compared to the smaller F30 Sedan, and we were impressed by the lack of torque steering, which not all competitors can claim. The steering provides great road feedback up to a comfortable level, but we can see why drivers with “sporty traits” are going to want a little more feedback from the road. 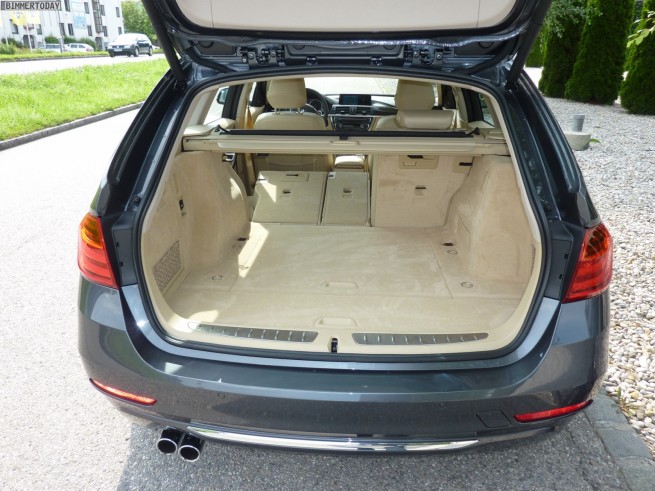 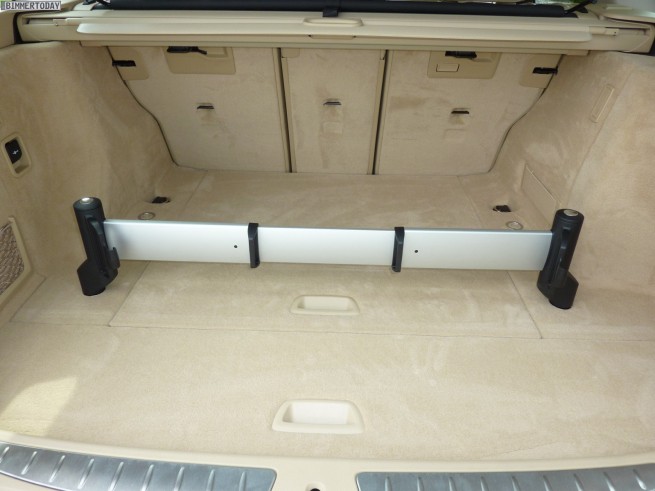 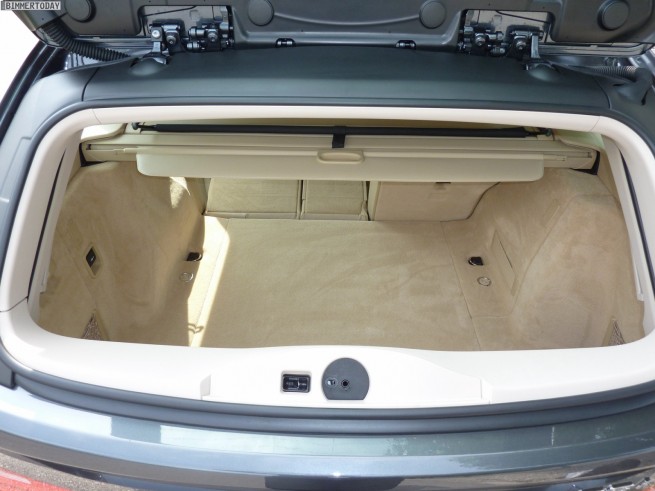 The boot of the F31 Touring has a capacity of up to 1,500 liters, which makes the 3 Series Touring stand out in its premium class. The tailgate can be electronically opened and closed; an optional Hands Free Opening Tailgate is offered as well. If one approaches the new 3 Series Touring with hands full, one need only stick a foot under the rear bumper to automatically open the tailgate.

As seen in the E46 generation of tourings, the rear window can be opened separately to load or unload small items from the trunk. In order to optimally use the space behind the large rear hatch, BMW designed many clever stowable solutions: separate partition net and luggage compartment cover. An additional strap along the right side panel can be used to help secure cargo and four tie-downs are integrated into the cargo floor, so transporting delicate items is safe and convenient.

The new BMW 3 Series Touring not only visuals represents what a 3 Series model should look like, but it also feels and behaves as you would expect from a mid-size premium car. The driving experience is less isolated than in a 5 or 6 Series, and the vast majority of customers will be pleased with the steering feedback.

The luggage space can be segmented and it’s well equipped for many cargo transportation scenarios . Thanks to the adaptive suspension, the F31 also masters the balance between sportiness and comfort, occasionally required in everyday life, and we believe it’s a significant improvement over the previous generation.