2012 DTM: Another podium for BMW at Brands Hatch

Home » 2012 DTM: Another podium for BMW at Brands Hatch 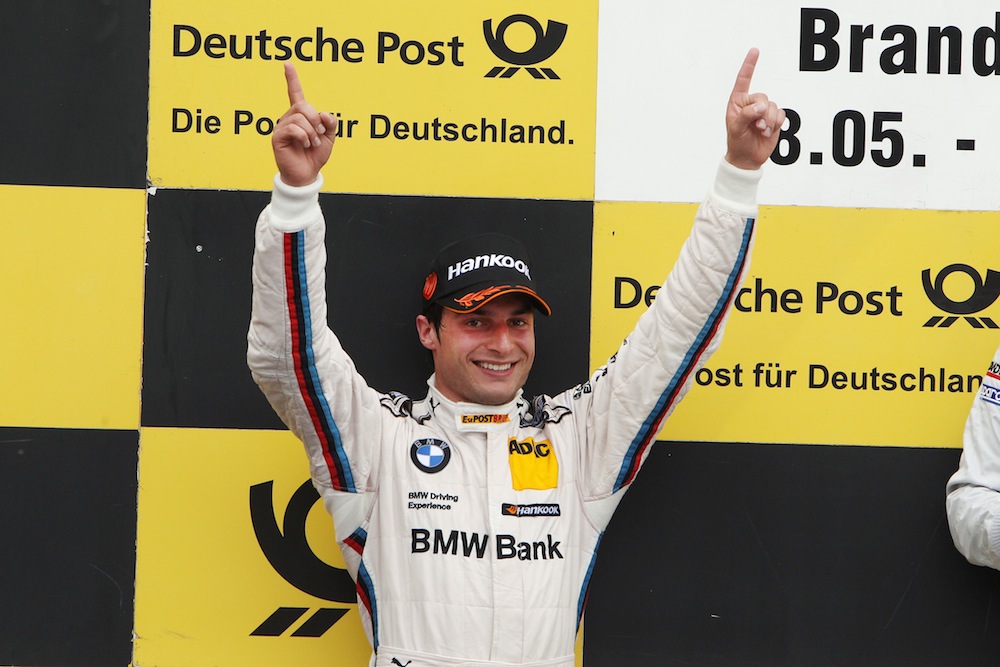 BMW Motorsport continues to enjoy success in the DTM: following his victory at the Lausitzring (DE) a fortnight ago, Bruno Spengler (CA) of BMW Team Schnitzer was once again celebrating on the podium at the end of the race in Brands Hatch (GB). After 97 laps, the 28-year-old crossed the finish line in second place at the wheel of the BMW Bank M3 DTM. Victory in the third race of ten this season went to Mercedes driver Gary Paffett (GB), who took the chequered flag 2.7 seconds ahead of Spengler.

Spengler was not the only BMW driver to add to his points tally at the 1.929-kilometre “Brands Hatch Circuit”. Martin Tomczyk (DE, BMW M Performance Parts M3 DTM) finished fourth – his best result of the season – and leaves Great Britain with another 12 points to his name. Tomczyk also clocked the fastest lap of the race (42.138 seconds) on lap 57. 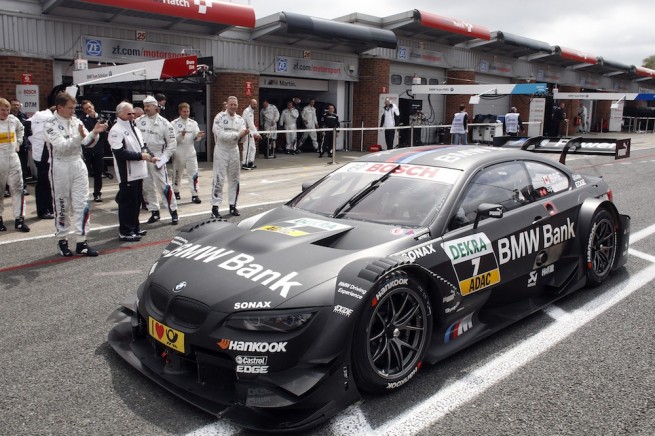 Augusto Farfus (BR), at the wheel of the Castrol EDGE BMW M3 DTM, came home in 11th. Joey Hand (US, SAMSUNG BMW M3 DTM) was 13th and Dirk Werner (DE) followed in 16th in his E-POSTBRIEF BMW M3 DTM. Andy Priaulx (GB), racing in front of his home crowd in the Crowne Plaza Hotels BMW M3 DTM, was forced to retire early on in the race.

Spengler got off to a flyer from third place on the grid and immediately moved into second, before settling in to be within striking distance of Paffett throughout the entire race. With the race drawing to a close, however, the Canadian was forced to start looking over his shoulder. The front splitter of the BMW Bank M3 DTM was damaged on the kerb in turn one, preventing Spengler from pushing his car to the limit over the final few laps. Third-placed Audi driver Mike Rockenfeller (DE) was closing the gap with every lap, but Spengler was able to hold on to second. Tomczyk dropped two positions at the start, but quickly moved back into fifth thanks to overtaking manoeuvres against Mattias Ekström (SE) and Adrien Tambay (FR). The BMW Team RMG driver gained another position over the course of the race, courtesy of a good strategy and quick pit stops.

The result sees Spengler climb to second place in the DTM drivers’ standings on 43 points, behind Gary Paffett (68). Tomczyk now has 18 points in seventh, followed in eighth and ninth by Farfus (15) and Priaulx (8).

“I am very happy again with our third outing of the 2012 season. This is the first time we have brought a DTM car to Brands Hatch, and we found our feet very quickly. Our drivers were immediately able to compete with the front-runners. Second and fourth achieved by Bruno and Martin are fantastic results. Bruno once again showed nerves of steel and Martin was also extremely quick and produced a flawless drive. The last few laps were particularly nerve-wracking, but our drivers and teams did a super job and all deserve a huge compliment. We have a very good record so far, with three podium finishes from three races. We barely have time to catch our breath now before the next race in Spielberg in 14 days. We have found a good rhythm in the DTM, so I hope that we will be as quick in Austria as we were here. However, the first few races have already shown that the 2012 DTM pack is reshuffled at every circuit. The three manufacturers are on a par with each other, making it all but impossible to predict the race weekends. This is the best possible scenario for the fans, as motor racing can hardly get any more exciting and evenly balanced than in the DTM.”

“That was another really impressive race from Bruno. We were a bit nervous towards the end when the front splitter on his car was damaged. After that he was lacking downforce, particularly in the right-handers, meaning he could not maintain his good pace. From this point on, it was all about defending his position against the cars pursuing him. It all worked out in the end though. For Dirk, it was important to get a solid race under his belt and again gain a lot more DTM experience, which he did. It is unbelievable that we have finished on the podium in two of the three races. BMW has built a really fantastic car. I think today’s podium finish also makes a great birthday present for Jens Marquardt.”

“What happened to Andy at his home race was very disappointing. He had an incident on the first lap that broke a part on the front of the car and, unfortunately, we could not continue. That was race over. With Augusto it was really difficult for him as we were trapped behind Adrien Tambay. We were clearly faster than him. We tried to overtake at the pit stop, but it was not possible today. In the end Augusto made a nice move when both him and Bruno passed Tambay, but basically we were slowed down in the first two thirds of the race and then it was over for us. In the end we learned a lot again, which was the goal for our first year. We now need to analyse this and we are looking forward to Austria.”

“We took another step forward at this race. Martin’s fourth place is a great result for us. Joey also put in a good performance. He is feeling more and more at home in the DTM. This good result means we will now travel to Spielberg with a lot of momentum.”

“I am very happy with this second place. Gary Paffett was very quick, particularly in the first stint. Despite this, I was able to hang on to his coattails. It reminded me of my win at the Lausitzring, but with the roles reversed. It was a tough race. You do not have much time to take a breather in the cockpit. The team was brilliant again. The second stop was particularly good. My front-left splitter broke towards the end of the race, which made things a bit exciting. But we did enough. The season has been great so far. The three manufacturers are extremely evenly matched, which makes it fun for us drivers as well as the fans.”

“Generally speaking, fourth place in Brands Hatch is a good result for me and my BMW Team RMG. The pace of my car was very good today. I made a little mistake at the start, and my pit stops were not quite perfect. Maybe we could have had an even better result today. However, my team and I are getting better with every race. With that in mind, I am full of confidence for the challenges ahead.”

“It is quite disappointing somehow, because we had a better pace than 11th. Unfortunately we could not use the strategy in our favour, however. We did two stops ahead of the others and came out in traffic each time. I never had a free track to try to get the guy in front of me. Car wise I think the balance was very good. Spielberg in two weeks gives us the opportunity to take better advantage of the car’s potential.”

“I got off to quite a good start. I think that was my best start so far in the DTM. After that, I got stuck in traffic and took a couple of hits. This is a really tough series, but I am getting better with every lap. My goal is to get in the top ten as soon as possible.”

“As expected, it was not easy to move through the field from 19th on the grid. A lot went wrong at the start, resulting in me dropping even further back. However, a good strategy and my team’s pit stops meant we were actually able to improve our position a bit. I am obviously not satisfied with my weekend, but I learned a lot again this time. I will try to use the experience I gained as much as possible in the next races. Congratulations to Bruno and everyone at BMW Team Schnitzer. They did a super job.”

“I just had some contact on the first lap, the whole front splitter was damaged and that was the end of the race. It was very unlucky and a disappointing weekend for me overall. That is motor racing and you just have to take it on the chin and move on. Overall I haven’t felt really comfortable from the first laps this weekend, and I just have to understand what is going on. We will come back next year and make amends.” 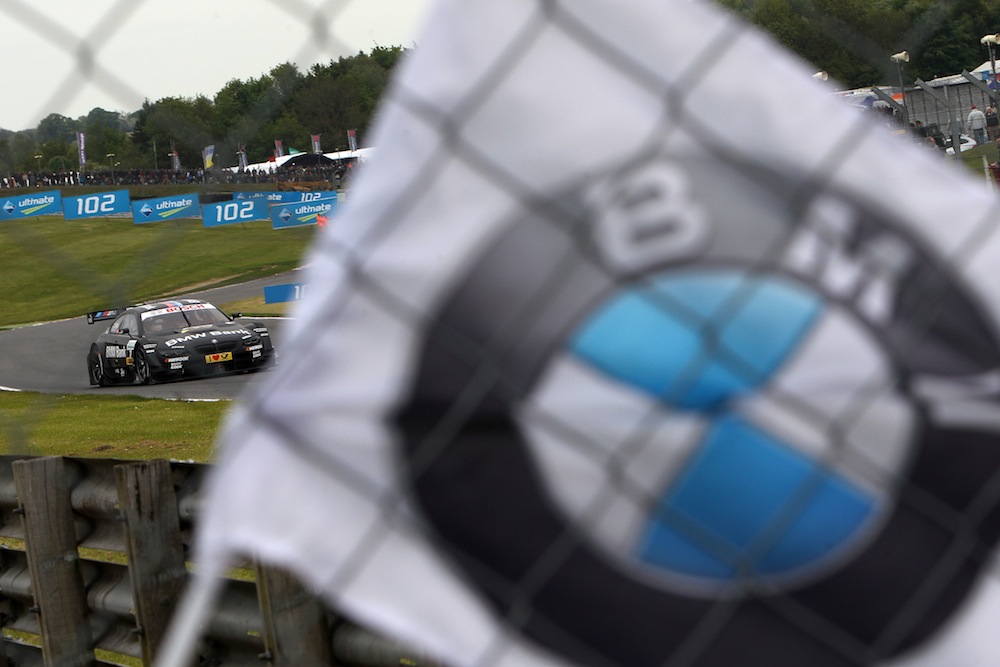 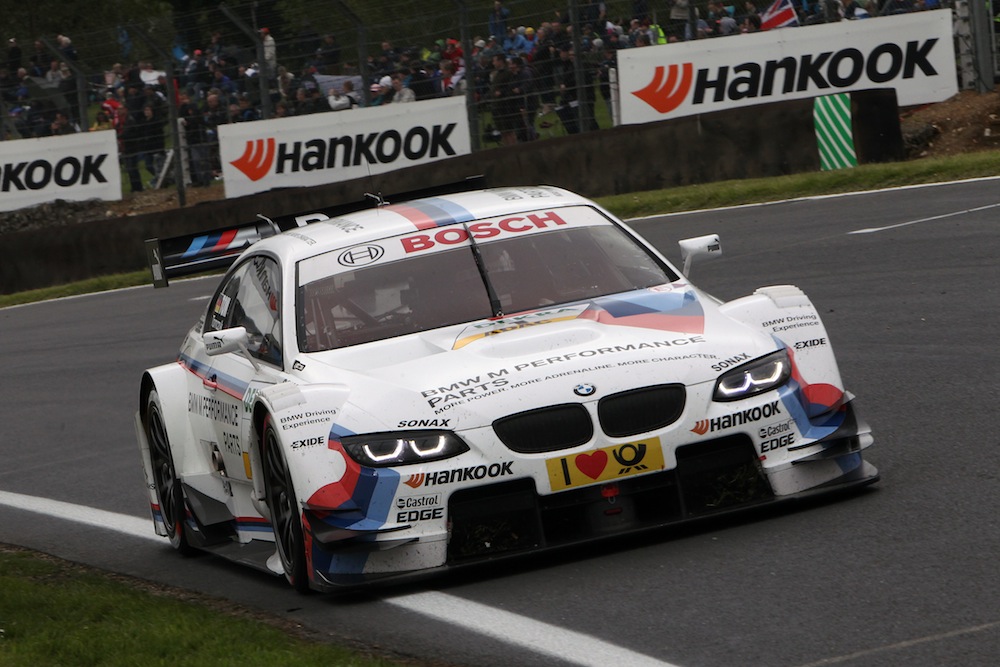 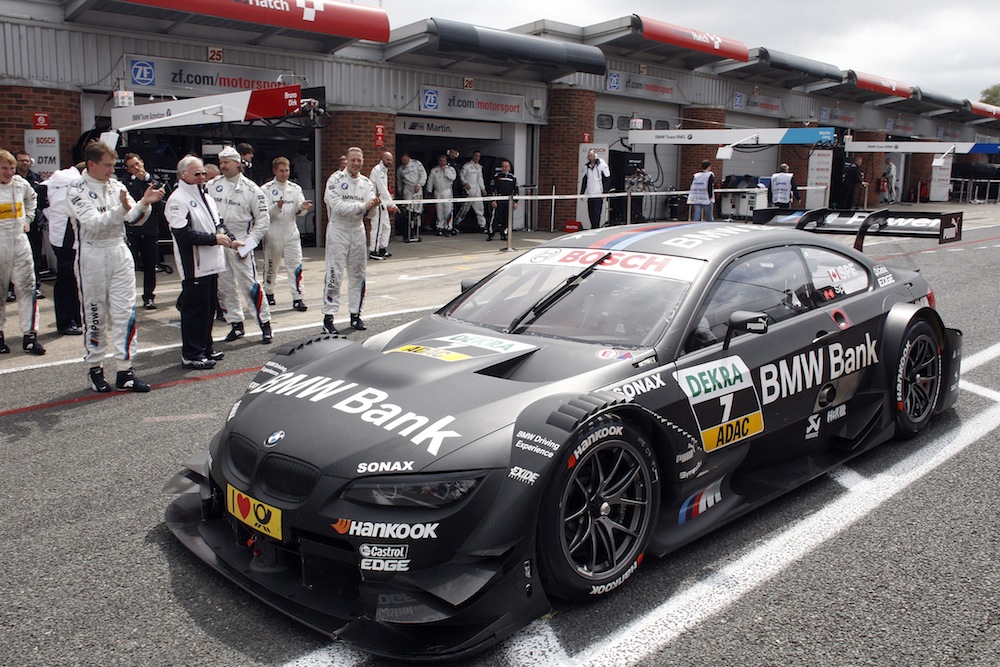 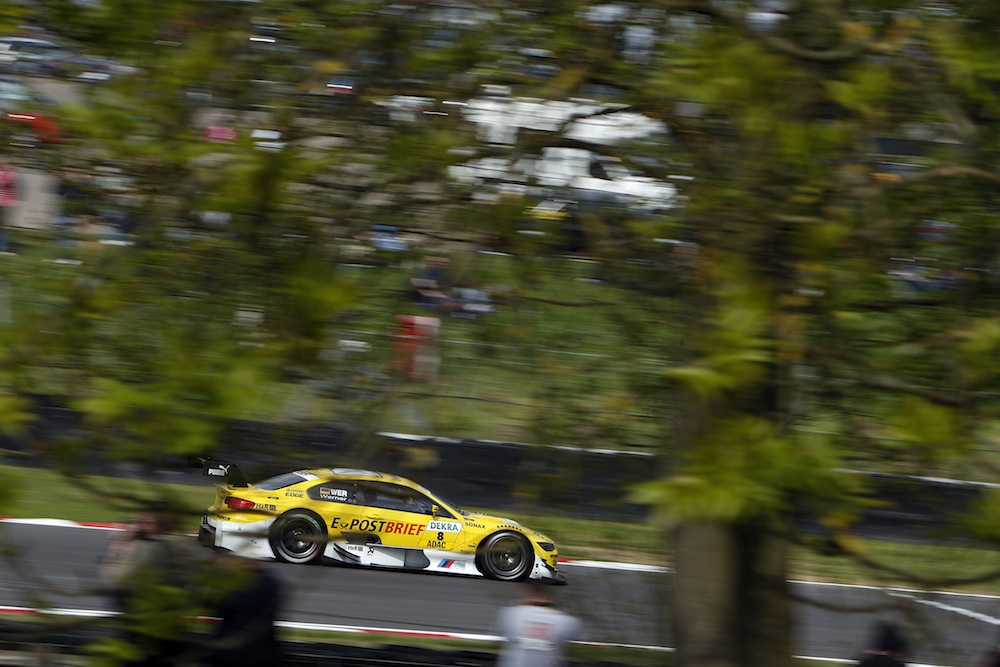 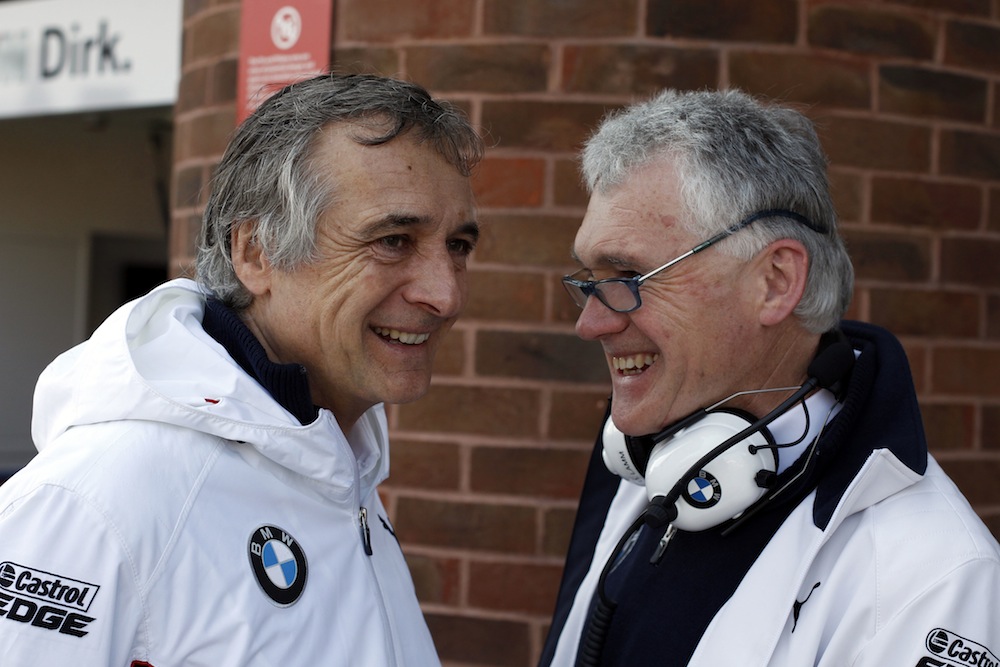 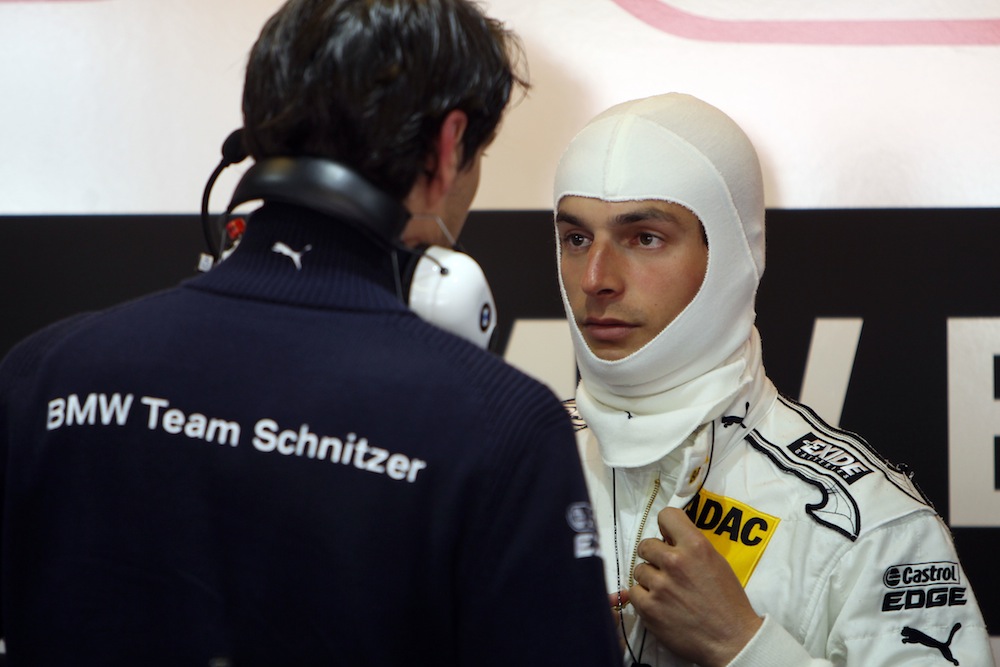 6 responses to “2012 DTM: Another podium for BMW at Brands Hatch”