Home » Jeff Koons: “Winning is the most important aesthetic.”

This year sees BMW participate in the Le Mans 24-hour race with an Art Car for the fifth time. These four-wheeled artworks first impressed with their design and sportiness in the 1970s, with a BMW 320i Group 5 liveried by Roy Lichtenstein (US) finishing the 1977 event in ninth. A BMW M1 artistically painted by Andy Warhol (US) was sixth overall – the best result to date for a BMW Art Car at the “Circuit de la Sarthe” – two years later.

The BMW M3 GT2 bearing the number 79 will contest the LM GT2 class of this year’s endurance classic. While a top overall placing with a GT race car is extremely unlikely, Team BMW Motorsport has targeted a good result in this tightly-contested category.

For Jeff Koons, however, it is not enough that a car bearing his art simply impresses the fans with its unique colouring. He is hopeful that drivers Dirk Werner (DE), Dirk Müller (DE) and Andy Priaulx (GB) will be able to mix it at the front of the GT2 class with the BMW M3 GT2 Art Car. “My design had to depict the energy of the BMW M3 GT2. I think it would be really fantastic to work on a car that could win. Winning is the most important aesthetic.” 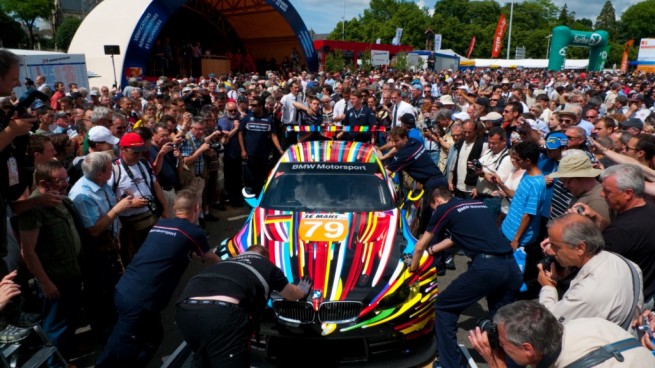 That he is following in the footsteps of Andy Warhol, whose Art Car 31 years ago was the last to compete in the Le Mans 24 Hours, is, says Koons, “an honour” before adding: “It’s a treat to know that Andy Warhol’s 1979 art car was the last to race and that mine will be the next.”

Jeff Koons has announced that he will donate his fee from BMW (two BMW cars of his choice) for the creation of the Art Car to the International Centre for Missing and Exploited Children, which coordinates a global network of organizations fighting child-sexual exploitation and abduction, and the Koons Family Institute, a resource of ICMEC. Jeff and Justine Koons have announced that if the BMW Art Car wins at Le Mans in its class, they will double the amount of the donation.

The three drivers of the 17th BMW Art Car are equally proud to be behind its wheel at Le Mans. “It is probably seldom during your career as a race driver you have the opportunity of racing a work of art,” says Werner. “I am honoured to be able to drive the BMW M3 GT2 Art Car.” This applies, too, to Müller, who is totally enthusiastic about the car’s design, saying: “When I first saw the completed Art Car I was totally breathless. It looks simply sensational. You are inclined to want to drive carefully so as not to scratch it. But that is not why we are here. We will do everything to deliver a good result with this wonderful car.”

Triple world touring car world champion Priaulx agrees: “This Art Car is certainly the most spectacular car that I have ever driven. Now we need to ensure that we cause a similar furore on the track.” In addition to the BMW Art Car, Team BMW Motorsport has entered a second BMW M3 GT2 in the Le Mans race. The car bearing number 78 will be driven by Jörg Müller (DE), Augusto Farfus (BR) and Uwe Alzen (DE).