As 2014 winds down to an end, I want to look back on all of the cars I’ve driven this past year and see if I can come up with a favorite.

I’ve had the privilege to drive some pretty incredible cars recently. Some cheap little hatchbacks, some monstrously expensive exotics. I remember them all with great detail; the feel/feedback of the steering, the pull of acceleration, the sound of the exhaust but most of all, how they made me feel. Because, ultimately, that’s the most important aspect of a car — how it makes you feel. Forget horsepower numbers, forget 0-60 or quarter-mile times. It’s all irrelevant if the car doesn’t feel right.

Though I only had a short drive, I liked the new CTS quite a bit. It had the right amount of space, it looks great inside and out and genuinely handles very well. I only got to drive the 2.0 liter four-cylinder version and not the monster Vsport version but it was fun nonetheless. Obviously the Vsport is the one to own, but any CTS would be the perfect midsize luxury car. It’s just the right balance of sport and luxury. The only issues I had with it were the standard suspension setup on the 2.0, as it was a bit spikey over big bumps, and the paddle shifters felt like they were made by Fisher Price. Other than that the CTS is a fine automobile that breathes a bit of fun into what can be quite a dull segment. It looks square-jawed and a bit angry and the interior is blingy (a bit too much for my tastes, but at least it’s interesting). Plus it’s got good power from all engines and some nice gearbox choices. It seems a bit silly to put a simple luxury sedan in my top five, but I was so surprised by how good it actually was that I had to include it. But it’s nowhere near as good as the next four, so it stays at five.

I got a chance to drive three laps around NJ Motorsports Racetrack in the McLaren 12c. Holy hell. It may not be the best looking car, it may not be the most desirable car, but my god is it fast. It redefines what you think speed is. What impressed me most is how it handles the speed. It shrugs off triple digit speeds like a bear shrugs off a bee sting. The 12c is simply the most technically impressive car I’ve ever driven. Everything works in a beautiful harmony; the engine, the gearbox, the independent suspension. Every singe part feels tailor built to make even the most novice of drivers achieve unimaginable speeds. The only issue with the McLaren, is that it felt a bit cold. While it was exciting from a technical standpoint, it lacked a bit in the “fizz” department (as Captain Slow would say). It just didn’t make me giggle like the next three cars did. Perfect in every other way, but lacking a bit in the most important category.  Still, it was an absolute blast to drive, so it’s number four. 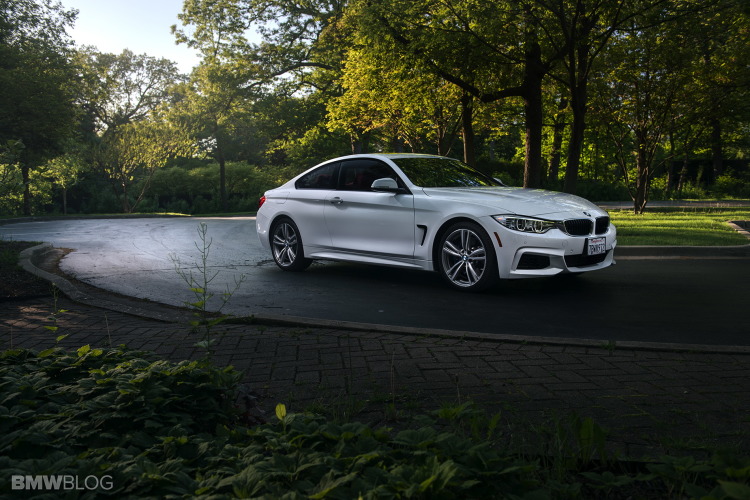 I got to drive both the 428i Sport Line and the 434i M Sport line back to back and I liked both very much. Loved is the better term, I think. I remember going into it pessimistically, thinking I would dislike them. I didn’t like the idea of a 4 Series. Why fix what ain’t broke, right?  But after driving them, I’m a believer. Does it have the steering feel of an E30? No, but then, what does? I have to keep reminding car enthusiasts that nothing has truly great steering feel anymore. It’s gone by the wayside ever since electric power steering became popular. But there still great steering cars out there and the 4 Series is one of them. Motor Trend and Car and Driver will say that the ATS steers better. I’ve driven both and I disagree. The 4 Series was easily one of the most fun cars I’ve ever driven. It handles great, the engines are both fabulous, the 8-Speed ZF gearbox is unmatched and it’s still a comfortable, luxurious car. I love the 4 Series and covet it greatly. If I had my choice, I’d go for the 428i. It’s the more nimble feeling of the two, thanks to the lighter engine up front. So, while the 4 Series is excellent, the next two are even more so.

That’s back-to-back rankings for BMW. The i3 is up there with my favorite cars in the world. Many BMW enthusiasts might want to burn me at the stake for saying such profane things. However, those who doubt this car simply haven’t driven it. Is it a good looking car? Not really, but it’s so different and funky looking that you cannot take your eyes off of it. I’ve never gotten so many waves from passerby’s. Is it fast? For an electric car, yes, but for a standard sports car, no. However, it has more than enough oomph for any situation. So it isn’t good looking or fast, why is it number two? Simply because it might be the happiest car I’ve ever driven.

Normally I hate electric cars, I think they’re devoid of any emotion or soul. The i3 is different. It’s lively and happy and fun. It’s plucky too, doing far more than you’d expect with a big futuristic grin on its face. The i3 is also the most technologically enlightening thing I’ve ever seen.  It’s refreshing and new, yet still somehow manages to feel familiar and usable. Plus it burns no gas, needs no fluid changes and is still quick and fun to drive on back roads. The i3 is by far and away the most different and interesting car I’ve ever sat behind the wheel of. I adore that little electric gremlin and can’t wait for another go in it. But it still isn’t number one.

Out of all of the cars I’ve driven in 2014, or in my entire life for that matter, I’ve never had more fun than I had in the SLS AMG GT. Admittedly, my time with the SLS was on a track and was able to hit 172 mph, so maybe my view is a bit skewed. That being said, it was still the most excited vehicle I’ve even had the privilege of piloting. Everything, from the way it looks to the monstrous pull of the engine to the hellish sound of the exhaust, makes the SLS an incredibly special car.

Was the SLS better than the McLaren on the track? No, absolutely not. Was the SLS more fun than the McLaren on the track? Without a doubt. The SLS excites from the moment you close those ridiculous gullwing doors. Then you thumb the starter button and hear that mammoth 6.2 liter, hand-build, fire-breathing V8 come to life and the euphoria sets in. Put the car in manual mode, stab the throttle and feel your gut churn as your ears fill with what sounds like an apocalypse starting as the car fires forward with authority. Turn-in is sharper than anticipated and the rear-end is playful but not terrifying. The chassis balance is delightful, thanks to the trans-axle gearbox and the almost mid-engine placement of the V8, behind the front wheels. It’s just such a wonderful car to drive in every way. The suspension is firm yet compliant, the brakes are powerful with great pedal feel and that engine, oh that engine.

I love BMW’s 3.0 liter straight-six and the McLaren’s 3.8 liter V8 but the SLS’s 6.2 liter monster is by far and away my favorite. I had a bit of a hard time placing all of the cars on this list except this one. Hands down my favorite car I’ve ever driven and it happened this past year. In a list full of truly fantastic automobiles, the SLS AMG GT still shines.