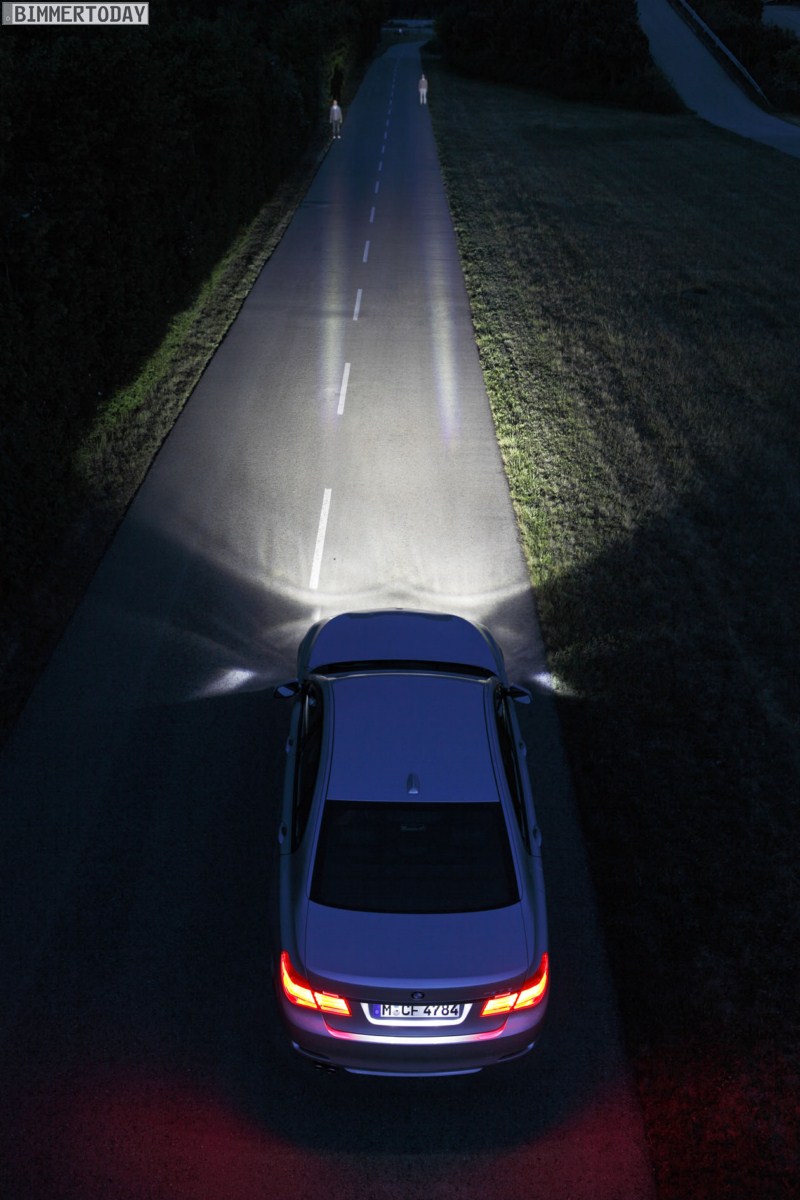 Spot on: BMW Night Vision of the next generation will feature the Dynamic Light Spot. Thanks to this targeted beam of light, pedestrians will become even more visible at night and accidents can be avoided.

The risk of a pedestrian being killed or injured in a traffic accident is four times as high at night or during twilight than in daylight. The same applies to the passengers themselves. Nighttime accidents – in particular serious accidents – are very often caused by the late recognition of persons or animals (e.g. deer) on the road. With BMW Night Vision, BMW has deployed a very effective assistance technology for driving in the dark under the umbrella of the BMW ConnectedDrive technologies. BMW Night Vision helps the driver by means of a thermal imaging camera for proactive, safe driving at night. 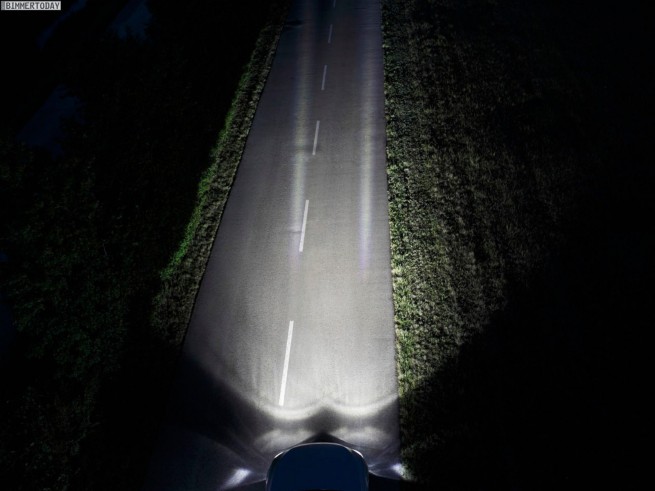 This support will be expanded by another BMW innovation for increasing the safety of night driving, in the form of the Dynamic Light Spot. Through targeted illumination of pedestrians on the road, the system ensures increased safety for all those involved, including the driver of the vehicle. By using BMW Dynamic Light Spot, the driver can usually avoid a collision or at least reduce its severity. The BMW Dynamic Light Spot is a so-called marker light. This system uses sensors to identify potentially endangered objects in the driver’s surroundings which are then illuminated in a targeted manner with a light spot. At the same time, a strip of light projected onto the road in front of the vehicle leading to the possible collision object draws the driver’s attention to that object. Thanks to early recognition of the pedestrian, the driver can either brake in time or take appropriate evasive action.

All cats are grey at night and visibility is very limited.
Conventional low-beam light allows drivers a theoretical range of vision of about 50 to 85 metres at night, which does not, however, mean that objects can be recognised at that distance. In tests, the recognisability of a darkly clad pedestrian in twilight was found to be just 29 metres. This is understandable, since at greater distances only the feet are illuminated. If the rule “drive so that you can stop within your visible range” were followed in the dark, it would not be advisable to drive even at 80 km/h since at this speed the braking distance is as much as 63 metres. 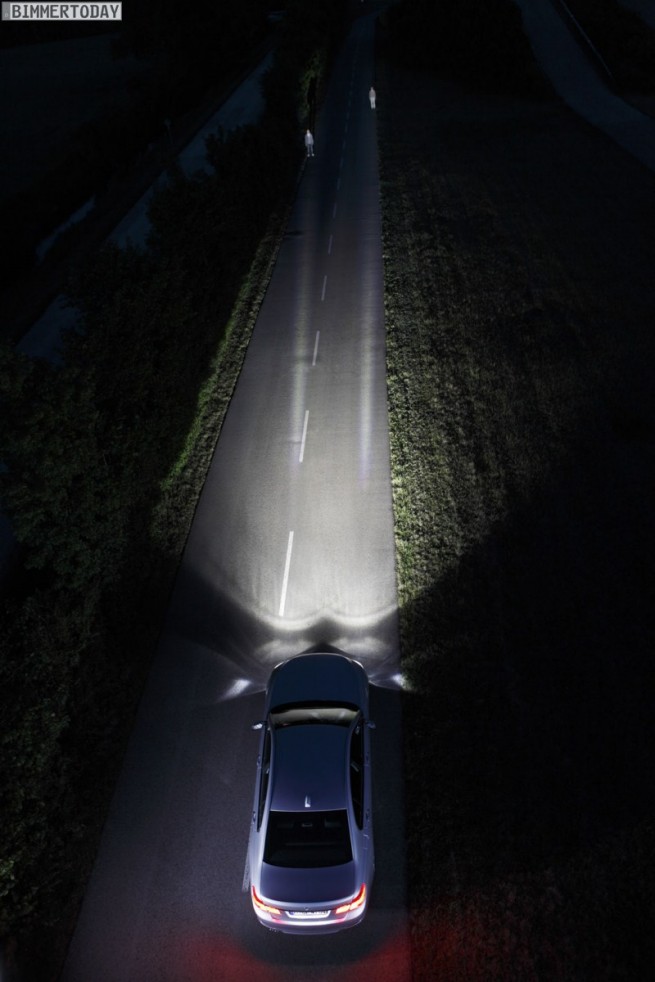 Night vision assistants are good, but in future things will be even better.
Today, night vision assistants such as BMW Night Vision are available. They provide the driver with an image of the area in front of the vehicle so that pedestrians and animals can be seen even from several hundred metres away. However, this presupposes that the driver uses the Night Vision screen like the rear view mirror and casts a glance at it from time to time. The technology works like this: BMW Night Vision uses an infrared camera with a viewing angle of 24 degrees which generates a thermal image that shows warm objects – people or animals – as bright shapes.

The marker light – targeted illumination helps to gain time.
Today, it is technically possible to identify the position of pedestrians very accurately. Once this position is known, a headlight can focus on that area and show directly where a potentially endangered pedestrian is. BMW calls this system Dynamic Light Spot. The major difference compared to other marker light assistants is that the BMW system projects a strip of light onto the road to direct the attention of the driver to the hazard. The light automatically draws the attention of the driver to the possible collision object and thus triggers an intuitive and fast reaction.

See earlier, react sooner.
In general, it is assumed that a vehicle driver heads in the direction in which he is looking. This has been observed in vehicle safety training when, for example, the driver learns to take evasive action in a tight situation – he usually concentrates on the zone directly in front of the vehicle. So in vehicle safety training, when a collision is imminent, the driver is taught to focus on a free pathway – or “escape route” – away from the road so that this particular direction for evasive action is within the line of vision. With Dynamic Light Spot, things are different. When an illuminated object that is beyond the braking distance is made visible to the driver, he has sufficient time to use the brakes to stop before the obstacle is reached. At the same time, Dynamic Light Spot and the strip of light on the road are switched off as soon as the vehicle is close enough for the normal lights to continue to illuminate the object. What BMW’s Dynamic Light Spot does is to indicate hazards to the driver from as far away as possible and direct his attention to them. The technical components of this system are essentially highly efficient sensors and headlight systems.

The sensor system recognises living creatures by their heat radiation.
To be able to warn the driver of a hazard in time, a recognition distance from the hazard of about 100 metres must be ensured, regardless of weather conditions. To achieve this, the light marking system must have a sufficiently perceptive sensor system. All currently available night vision systems based on near infrared require an input of 100W for illuminating the surroundings in front of the vehicle. This corresponds to additional CO2 emissions of 3 g/km, which is not acceptable these days. The BMW Night Vision Assistant has a far greater recognition range and no additional light source is required. That is because BMW Night Vision is based on detection of the heat radiated by objects and is also less susceptible to the influence of the weather. BMW Night Vision guarantees positive recognition of persons at a distance of 97 metres on average. 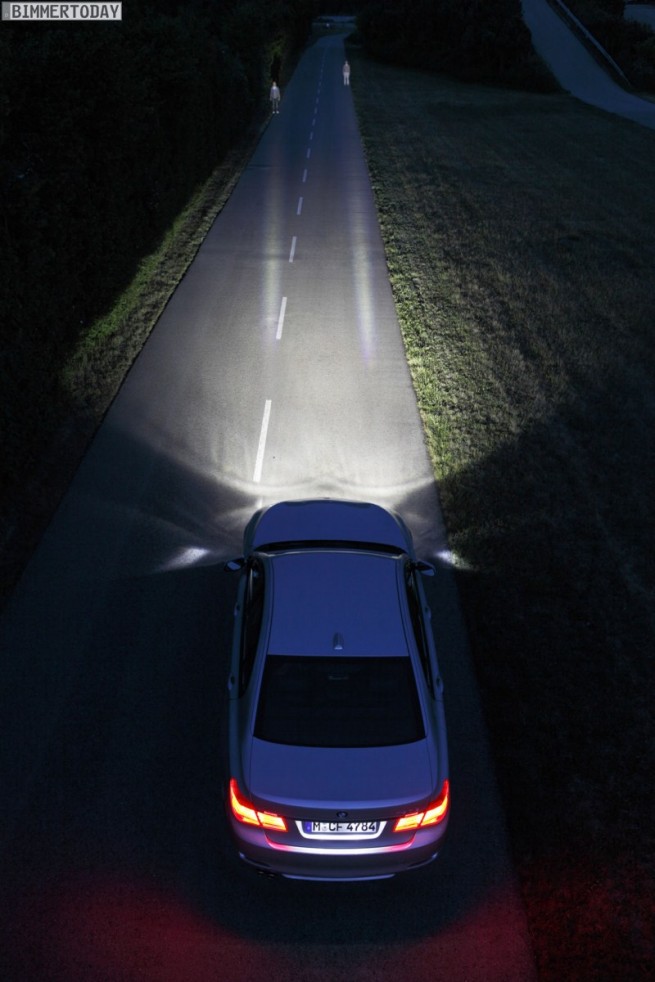 Headlight systems: with LED arrays, the obstacle is in direct view.
If, as in the case of BMW Night Vision, the vehicle is fitted with a suitable sensor system to achieve recognition of persons at a sufficient distance, it must be complemented by appropriate headlight technology to enable the Dynamic Light Spot function. There is a wide range of technical possibilities available, from pixel light headlights and xenon, to swivelling modules and so-called LED arrays – all with particular advantages and disadvantages. At present, the light marking is achieved using a swivelling LED spotlight. This ensures that, with a low, short- burst energy requirement, a beam of light that is optimal for the driver is dynamically generated, and a pleasant light image is generated by the swivelling movement. In the case of BMW Dynamic Light Spot, these high-power LEDs are integrated in the installation space of the fog lamps so that the remaining vehicle lighting can be based on conventional technology; full-LED headlights are not a system requirement.

Dynamic Light Spot can significantly reduce accident figures.
BMW is planning to include the Dynamic Light Spot functionality as a part of the special BMW Night Vision option – a result of the BMW ConnectedDrive innovation philosophy for its future new models. The targeted gain in safety – for drivers and passengers as well as those who might be involved in a collision at night – has already been proved in the course of system development. During BMW test drives in the development phase of Dynamic Light Spot, on average one object was highlighted and illuminated every hour.