Expedition towards the North Pole in an E34 525i 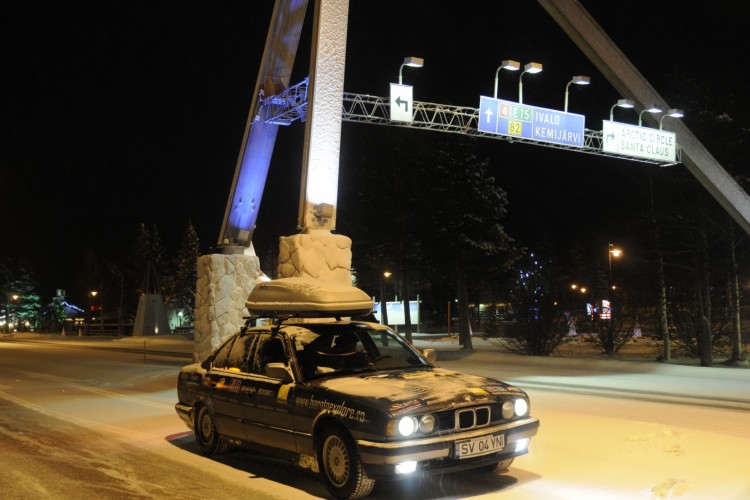 Passion knows no limits, and this applies to car passion as well. A BMW enthusiast has set off on a journey towards the North Pole, almost reaching the Arctic Circle, in an E34 525i, bringing the love and passion for the BMW spirit beyond the conventional limits.

Besides his passion for BMW, Ovidiu Jelea is a Romanian passionate explorer, traveler and lover of the mountain. Ovidiu has managed to climb Mont Blanc and Elbrus during the winter and is planning to climb the “7 Magnificent”, some of the world’s highest peaks. The climbing on Elbrus was part of a more extensive expedition throughout Europe, which lasted almost a month and stretched over 13,000 km (8,125 miles).

But the most impressive thing is that this entire journey was made aboard a 1991 BMW 5 Series.

The Romanian sister-blog www.bmwblog.ro found out more about the details and idea behind this expedition. 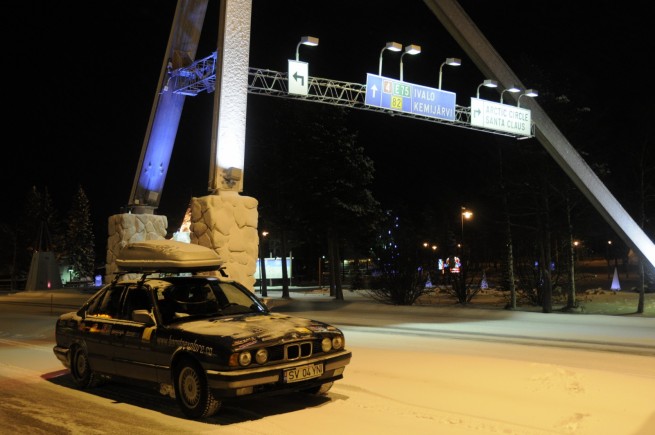 Let’s start with the idea behind this journey. Why the Arctic Circle? How did you make up the list of “Magnificent Seven”?
Ovidiu Jelea: The journey is part of an extended climbing project, named “7 Magnificent”, that involves climbing seven mountain peaks: Mont Blanc (4,810m), Elbrus (5,642m), Mc Kinley (6,194m), Nuptse (7,861m), Lhotse (8,516m), Everest (8,848m) and K2 (8,611m). The main criteria in choosing these specific peaks was for them to prepare me for the climbing of K2, the most dangerous mountain in the world, the ultimate magnificent, which is for me a childhood dream. I climbed the first two peaks, Mont Blanc and Elbrus, during the winter, this being more difficult than the usual climb during the summer time. 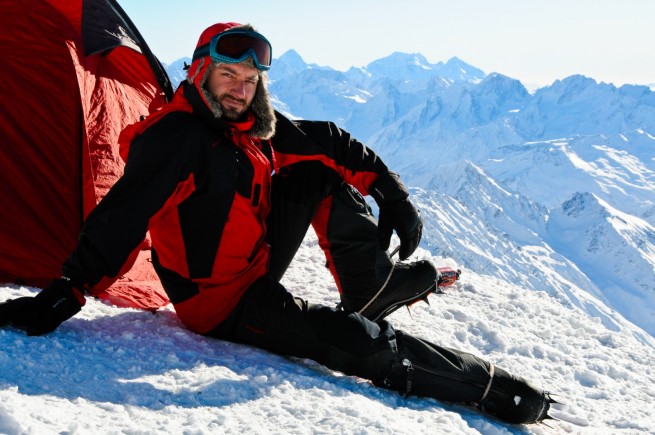 The journey to Elbrus (in Caucasus Mountains) involved more than a trip to Russia which ended with a climbing. The motto of my website www.borntoexplore.ro, is in an approximate translation “Youth needs ingredients”. This is my way of thinking. Sports, adventure, following my dreams, all these represent the ingredients I offer myself to keep myself young. Another ingredient is the feeling of freedom I get out of traveling. Therefore, when I imagined my  journey to Elbrus, I didn’t set off East, where the mountain actually is, but West, then North.

“…to me BMW represents an ingredient of youth…”

The trip summed up 13,000 km (8,125 miles) throughout 15 countries, which touched down the Arctic circle in Lapland, Rovaniemi, known as Santa Claus’s home.

Initially I planned to reach the North Cape – the northern point of continental Europe – but the last part of the journey was closed to automobiles traffic during winter, so I chose Rovaniemi, which crosses the Northern Polar Circle. 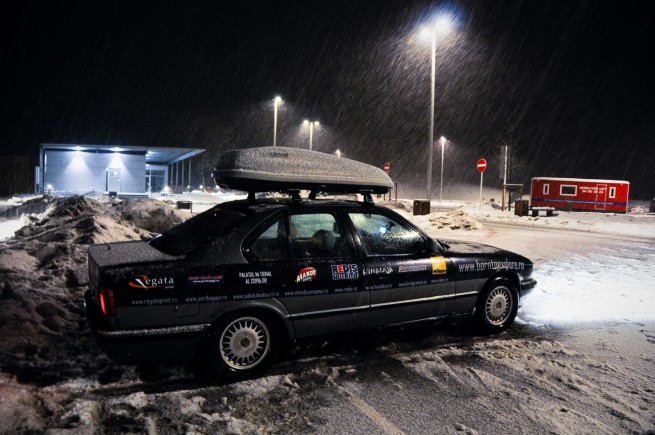 Let’s talk a bit about the car chosen for this journey – Why a BMW and most important, why a E34 5 Series?
Ovidiu Jelea: That’s not a car, it’s a legend. The fun part was when we had to decide upon the vehicle that would drive us to our destination. The idea to set off during the winter and go towards the Arctic Circle in a car that was only 20 years old and had rear wheel drive was appealing to only one person: myself. My travel partners and the people who knew me were just as worried as I was confident and relaxed. The E34 is my first car, purchased when I was nineteen.

It’s the third generation of the 5 Series, a very reliable car, robust and with surprising sports performance, considering it’s a sedan. Although it’s equipped with most of the gadgets that can be seen in a modern car (computer, air conditioning, electric mirrors and windows) it is build rather in a “raw” manner, and this in a positive meaning. There are not many electronic devices, and the ones that exist are not sophisticated, but of the highest quality. It’s a BMW and if any technical challenges had appeared, I could have solved them myself. And we should bear in mind that some sections of the road were in a remote area, where the cell phone signal was nonexistent. But before anything else, I knew I could count on the “legend” that never let me down.

How many kilometers have  you completed in this journey and over what period of time?
Ovidiu Jelea: The whole journey meant more than 13,000 km done in three weeks, with one week spent in the mountains. That would mean on average, 600 km/day. From the outside it seems a bit puzzling, a lot of people are surprised to see the pictures and read about the touristic objectives we visited, because it seems impossible to go on the road in winter time for so many kilometers each day and still have time for sightseeing. The secret is that all four of us in the car were drivers and took turns driving it, and therefore traveled during the night as well. 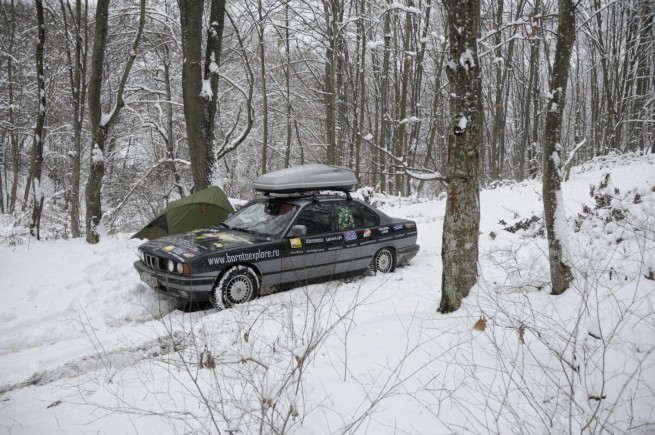 Were there any technical upgrades done to the car? How was the car prepared for the special winter conditions?
Ovidiu Jelea: We’re talking about a 525i, powered by the M50B25 engine, outputting 192hp. Before we left for the trip, the “legend” was well prepared by the specialists at Automobile Bavaria (a local BMW dealership in Romania).

It was very important that I was not in this alone. Besides the other people joining me in this trip, Cristian Rata, Daniela Popa si Vlascianu Dana, I had by my side a powerful team of partners and sponsors. 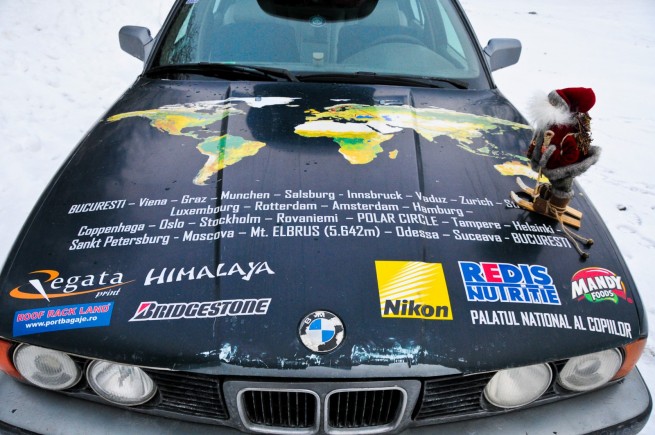 How did the car handle itself during this difficult journey? Were there any technical issues?
Ovidiu Jelea: The E34 went smoothly throughout our entire journey. We encountered heavy snow, rain, storms, strong winds, driving constantly at -30 degrees Celsius, we drove on either dry asphalt, glaze, ice, snow, on highways, forest roads and bumpy roads in Eastern Europe and Russia. Zero technical issues.

What advice would you give to those who would consider a similar journey?
Ovidiu Jelea: To pick a BMW car and to thoroughly plan the entire journey, down to the smallest details. The keys to success are perfect planning and evaluating the risks assumed. 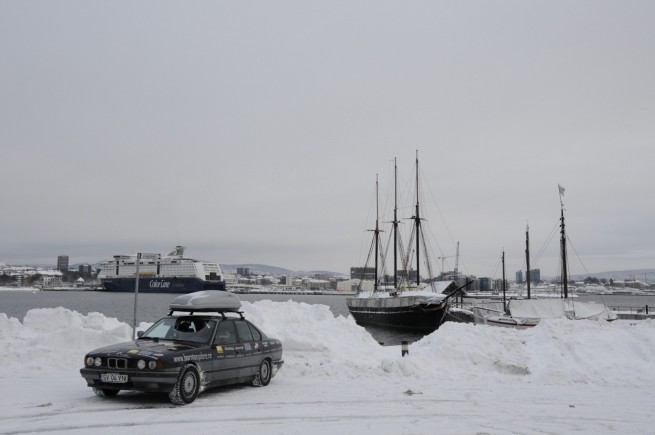 What would you regard as essential for the success of this journey, from a technical standpoint?

Ovidiu Jelea: The gasoline engine – I never had any trouble starting it up, and the average fuel consumption was 10 liters/km (23.52 mpg), with four adults in the car and more than 200 kg of equipments and food. Moreover, we didn’t have any issues with the air conditioning unit: although outside everything was frozen, in the car we were wearing T-shirts. Regarding the rear wheel drive, opposite to what most of the people think, I consider a RWD car easier to handle than a FWD one, even when the roads are covered in glaze, and this gave me confidence. Winter tires of highest quality were essential. And let’s not forget the interior comfort: space, seats design, leather upholstery – because all of us spent a great deal of hours inside the car.

When will your BMW be involved again in a similar project?
Ovidiu Jelea: After this tour of Europe during winter, I will prepare a tour of North American continent, during the winter as well, having as destination the Mc Kinley peak, in Alaska. This will involve more than 30,000 km on the road, and the E34 BMW will be transported across the ocean for this adventure. I am sure this will end well, and then we’ll have to tackle the other magnificent peaks in the project. I can only say the climbing of the rest of the peaks on the list will take place during longer, more difficult and more beautiful expeditions, but in all of them I will use the “legend”. 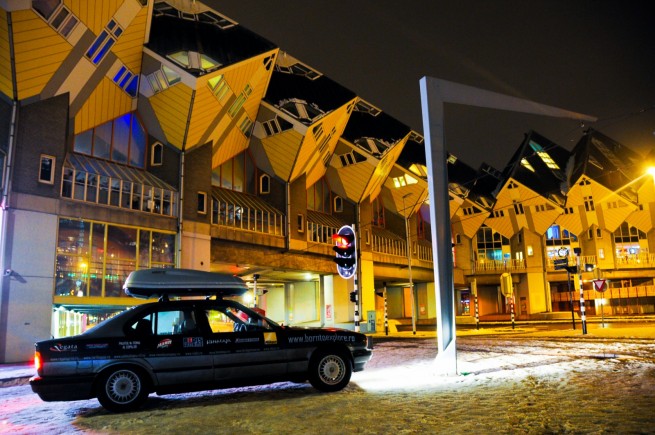 Tell us a bit about your relationship with the BMW brand. Where does this passion come from?
Ovidiu Jelea: As I mentioned before, I bought my first BMW, the E34 I was driving during the expeditions, when I was 19. At that time I would have wanted a E34 M5, but it wasn’t meant to be. I wanted a car that would be both elegant and sporty, and a car that would represent me. I had a dog at that time, a German Shepherd, that I used to carry to a lot of contests within the country and abroad. Everywhere I went, I drove the BMW. I remember driving more than 60,000 km only in the first year. Slowly, I became a fan.

The BMW Museum is more than a museum made to impress. It’s an emotional story…”

Ovidiu Jelea: The BMW Museum is more than a museum made to impress. It’s an emotional story, built on the history of a group of people who make everything possible to awaken other people’s senses. You can feel this in the air, from the state-of-the-art cars that went into production, to Gina, the car that can blink. From the silver spheres that dance in the air putting up a fantastic show, each of them being propelled by its own computer controlled engine, down to the hall where there are exhibited pictures of BMW enthusiasts in time, the BMW Museum is seducing you, captivating you and carries you into a world of passion and pleasure. 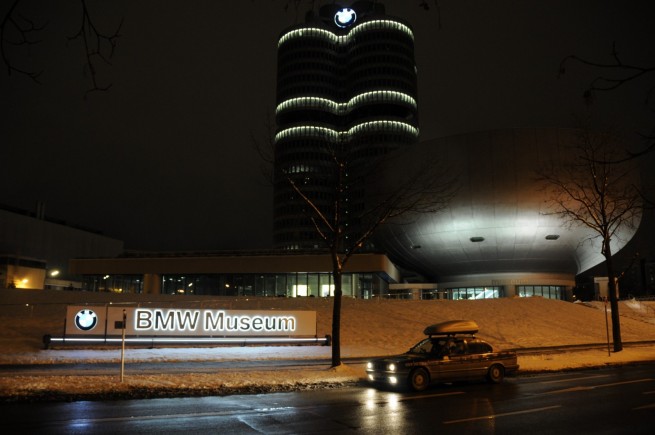 How would you define the BMW brand?
Ovidiu Jelea: To answer this question it’s more suitable to draw a parallel to my personal motto: “Youth needs ingredients” and for me BMW represents such an ingredient.

Why? Because I have just started to explore the entire world aboard a 20 year old BMW which seems to get younger as days go by.

Ovidiu, thank you for the interview and for your time!

For the BMW enthusiasts, Ovidiu Jelea has also created a video showing us the E34 525i throughout the 13,000 km traveled across Europe.