Well, here it is. After countless debate, the all-new BMW G80 M3 is here. Is it better than the F80? Is it even an M3? Do you want one? Let’s find out from Mike D’Ambrosio, a long-time BMW customer and professional photographer.

WHAT SHOULDN’T MATTER: THE NOSE

Go and see the car in person. Take it all in. I like it – there’s no mistaking the purpose of this car is to kick butt. I can’t tell you what your automotive taste should be, but M3s have never been beautiful cars. Just functional. Remember when everyone called the E92 M3 a revised Pontiac GTO, being too bland?

WHAT I DON’T LIKE THE CARBON FIBER BUCKET SEATS

Let’s talk carbon fiber seats. They are beautiful to behold. They can also accept a real five-point racing harness. The center cushion bolster can be removed to reveal a latch under the seat. They look great (did I mention that?). But, I don’t like them. Yes, for real.

I’m 6’1, with a 260 lb frame. At age 37, they are not for me, and a ride in the car for a few hours gave me a cramp. The large scallop of the bottom cushion means you need to move your butt up and over it, so ingress isn’t easy. Your significant other might hate them. If this sounds a bit “old man”, I apologize, but unless you’re a serious track person, make sure you try them out before you buy. The base seats are similar in shape to those on the F80, and that’s where I’m headed. People with smaller frames might like them.

The only other feature of the BMW G80 M3 I did not like was the Shadowline trim on the bottom of the entire car. It makes the M3 appear taller than it really is, and emphasizes the busy surface styling. Body color would be better here.

I think this problem started with the E90 M3. 400 horses is a lot. 444 in the F80 was definitely more than you need. Now we’re here. To exploit the performance potential of this car, you would need an open road, no police, and a lot of skill. That’s not really fun unless you have all three.

I love the current F90 M5, and it remains the most capable car I’ve ever driven. This G80 M3 is a lot like that M5. It’s so smooth and refined, yet so capable.

But like the M5, it keeps getting heavier. Comparing an F80 manual to a G80, the new M3 is nearly 500 lbs larger. That’s without the upcoming all-wheel drive. It actually weighs more than a BMW 540i sedan, and only 80 lbs less than an M8 Competition Coupe. It’s a heavy car, so if you’re thinking of tracking one, I suggest going to BMW M School to try one out on the edge first.

Seats aside, the interior is such a big upgrade over the F80. Despite its price tag, the F80 M3 never shed its base 3 Series roots inside, and everything felt cheap. Not so here. Taken from the G20 3 Series, the BMW G80 M3 has a large touch screen, big, leather-wrapped steering wheel, and beautiful carbon fiber trim. It’s such a large step up from previous M3s that you would be forgiven if you thought you were in an M5.

Speaking of the M5, this M3 rides like one. An extended run on cold, snow-covered roads proved just how comfortable an M3 can be. There is no exhaust drone, road noise is subdued, and even big expansion joints in the road never unsettled the car’s suspension. Putting the car in SPORT+ mode made it more firm, but never uncomfortable. It’s much improved over the F80, and it was better than even my F30 335i. Keep in mind, this was the Competition model M3 with 20-inch rear summer tires and rear-wheel drive.

The car gets an A+ here. The E92 was able to head to the track for a day, then take you home and pick up your date that night. This G80 continues that tradition.Don’t store this car, or save it. Make it your daily. It’s that good.

THE EXHAUST TONE ON THE BMW G80 M3

Let’s all accept that the days of S54 and S65 engines are gone, and turbo motors are here to stay. Turbocharged engines typically subdue the engine note that a car without them might have. That being said, this car had a deep cold start roar without any of the “stones in the washing machine” sound effects the F80 is known for. Available with the adjustable exhaust, pressing it on the highway kept the car pretty quiet. Only putting it in SPORT+, combined with the exhaust, made the car roar more.

Like every M3, it’ll need an aftermarket solution if you want to get attention, but out of the box it sounds great.

This M3 is faster than yours. The S58 is smooth, with power everywhere. Interesting to note that even in winter conditions, a stab of the throttle never upset the tires. Putting power down was always an issue on the F80, but even with rear-wheel drive, the Competition model felt much more capable.

YOU CAN GET A STICK WITHOUT LOOSING ANYTHING 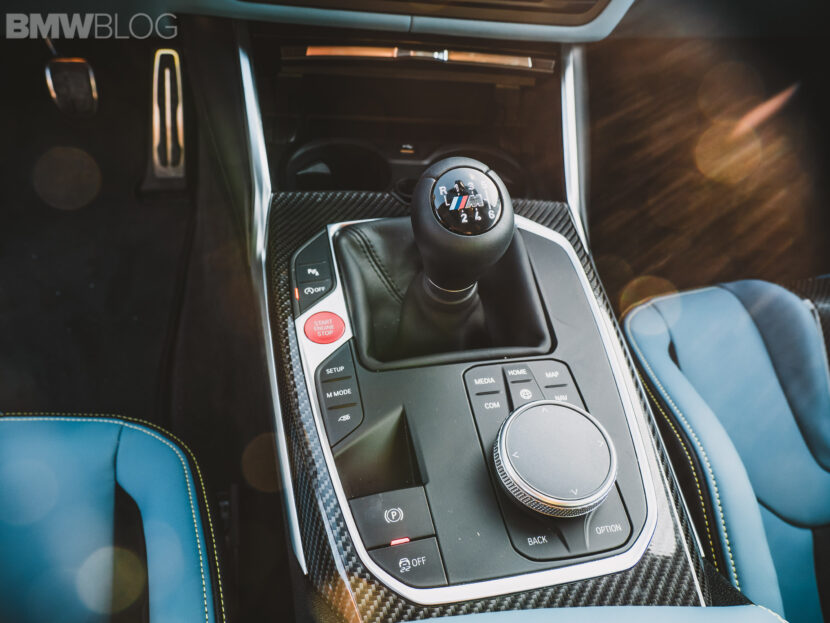 BMW is forcing you into a choice it never has before. Opt for the “base” M3, and you can get a 6-speed manual. Competition models only come with the 8-speed automatic from the M5. It’s logical. The all-wheel drive version due out this summer needs the automatic.

The result is that a stick G80 M3 gets “only” 473 horsepower. The Competition gets 503. I promise you will not miss the extra power, because 473 is already more than what you need. If you’re upset that you don’t get a black “M3 Competition” badge on the trunk, I’m sure BMW will sell you one.

If you want a stick, this is the time to get one, because the next M3 might not even have an ICE, let alone a manual transmission.

Given my ties to the M3 community, I take this post seriously. Unlike many other sports cars with a long history, the M3 has never had a specific spec. 4-cylinder, inline-6, V-8, turbo, stick, DCT…the list goes on. With the addition of all-wheel drive, the M3 has had just about every conceivable drive train configuration over the course of its life.

So I take that old-school M credo of high-revving engines and lively rear-end handling with a grain of salt. Have you driven an E36 M3 recently? It’s sloppy, slow, and old. Buyers want the tech, the safety, the versatility, the gas mileage and the power these days. This G80 fills every need, but most importantly, it’s fun!

Looking for small, old-school BMW feel? Try the M2. The M3 has graduated, because the class it belongs to has grown. There is no E30 being made anymore. I’m not telling you to sell your old M3 and get this one. I AM saying that you should make room in your garage for one. I think I will.