CAR Magazine test drive and reviews the BMW i3 with range extender.

At launch time, BMW i3 is also available with a range-extender engine, which maintains the charge of the lithium-ion battery at a constant level while on the move as soon as it dips below a certain value.

Performing this role is a 650cc two-cylinder gasoline engine developing 34 hp/25 kW, which is mounted immediately adjacent to the electric motor above the rear axle. Specifying the range extender has no effect on luggage capacity: the 2.4 gallon (nine liter) fuel tank is located in the front section of the car. 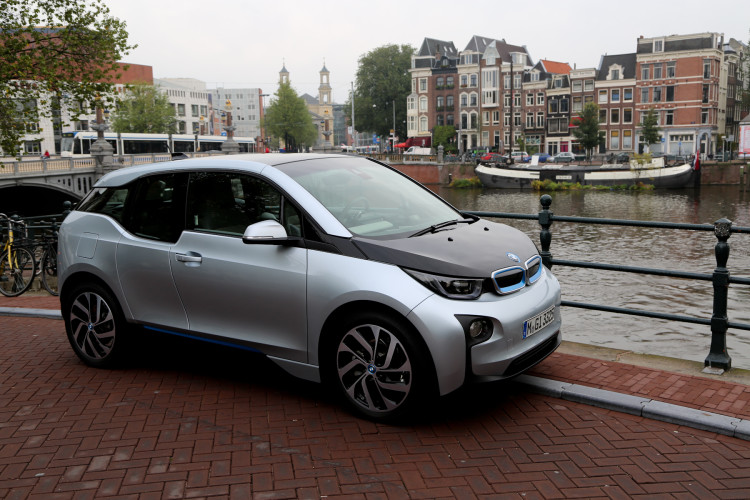 Here is an excerpt from the review, also read our own review of the BMW i3:

Is the petrol-assisted i3 Range Extender faster than the all-electric i3?

No, it’s marginally slower. Lugging around a petrol engine adds 120kg to the i3’s heft, and tacks 0.5sec onto the 0-62mph time, which extends from a ‘downright quick’ 7.2sec to a ‘very nippy’ 7.9sec. The top speed is unchanged at 93mph, but the all-important urban speed has suffered: standstill to 30mph is a couple of tenths slower than the solely battery-powered i3. No matter – you’ll still leave everything from cyclists to M3s panting at the lights. It’s two seconds faster to 62mph than a Nissan Leaf, and boy does it feel it.

Until the petrol engine fires up, this is an all-electric car, and therefore very similar to the regular i3 we drove (and liked) earlier in 2013. You won’t notice the weight penalty of the two-cylinder engine, so the i3’s still exceptionally swift off the line with traction never an issue for those slim rear tyres. Braking stability is impressive too – the i3 has strong retardation from its regenerative braking effect alone, but dab the left pedal for a swifter stop and it digs its heels in more stubbornly than an anti-fracking protestor.

Despite the battery aiding a low centre of gravity, the lofty i3 can’t cloak its height through bends, especially on the squidgy winter tyres of our test car. There’s body roll and eventual understeer to curb your enthusiasm, but the i3 clings on much longer than you’d imagine, having eyed its anorexic rubber and slab-sided profile. However, in isolation, you wouldn’t notice the extra heft of the motor, equivalent to a rotund passenger permanently on board.