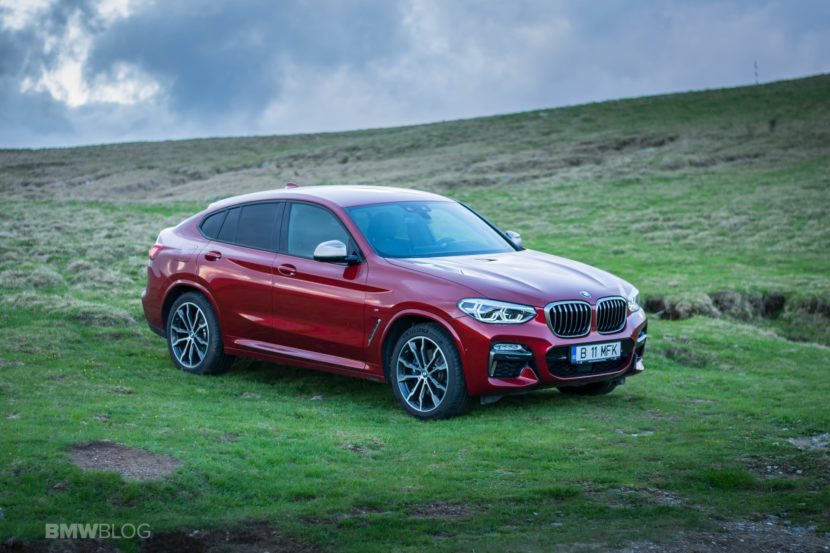 The BMW X4 won’t come to market until 2014, but rumors around a potential M version of the compact Sports Activity Coupe are starting to pop-up. Built under the code F26, the X4 shares the same platform as the new X3, and will be positioned, price wise, below the X5. According to our sources, the X4 is 4.65 meters long (183 inches), same length as the F25 X3.  The X4M, if approved, would take on the Porsche Macan, the new performance SUV based on the Cayenne model.

According to the usual BMW insider, Scott27, the BMW X4M is “being taken seriously as a concept in order to fulfill accessible performance for a Performance SUV and offer all-wheel-drive.”

Here is the full rumor from the BMW insider (edited for grammar):

With Porsche about to introduce a new performance niche based on the highly successful Cayenne Concept with the more compact and volume friendly Macan, BMW and BMW M are in the process of developing a significant competitor that when it comes to the market in 2015 it meets the Macan with a roar rather than a whimper.

Both the Macan and X4 are significant to their parent companies fortunes. The success of both the Cayenne in its two generations and the X6 has led to demand for smaller similar highly focused concepts embodying the style , image and similar performance level in a much more compact and price effective package.

The success of the BMW X6M has taken BMW by surprise which in some markets and in this case key strategic growth markets X6M outsells the M3 and M5. M considers the X6M as a “volume” model, although it does not sell in the usual quantities of BMW’s volume models. The amounts of X6M models that have been sold globally are considered “volume” by M standards.

Given the market reaction to the BMW X6 and X6M, BMW has investigated the prospect of a further Sport Activity Concept in regards to the global market for the X6 which has surpassed initial expectations by tripling its sales projection since introduction in early 2008. The success of the X6 has also pushed other manufacturers into developing similar concepts by combining sporty dynamic looks with luxury and high performance. The next phase of the luxury market and further expansion of luxury SUV vehicles.

BMW got there first.

Investigation into an X4 concept was further buoyed when it was revealed that the pre-owned market for the X6 was also extremely buoyant especially in markets where the X6 reigned. The BMW X4 Concept was inevitable.

Given the progress of high performance SUV type vehicles and indeed the BMW X6M as a highly successful sales concept, the art of progress leads BMW to conform that in today’s market- potentially an X4M has a) to be more successful than the X6M due to accessibility and b) to outsell the equivalent M3 Sedan in key strategic markets again like the X6M.

With the introduction of the Porsche Macan as the first high performance SUV concept in this segment development continues apace within BMW M’s engineering division in Garching. Effectively dubbed internally as “an M3 on stilts,” the X4M is being taken seriously as a concept in order to fulfill accessible performance for a Performance SUV and offer all-wheel-drive, a concept investigated and rejected for the current M5 and M3, and one of the decisions that led to the creation of the BMW M Performance brand.

With media reports disclosing the Macan Turbo using a 360 HP V6 before any subsequent Turbo S, and indeed like the Cayenne a GTS model, BMW are keen to make the point , that although X4M will have the advantage of the numbers game , the focus is on delivering that power in a dynamically competitive way that matches typical Porsche precision. The X4M will feature the same M3 in-line six-cylinder engine that is derived from an extensively reworked N55 with the latest in BMW’s advanced induction and bi-vanos variable valve timing technology. This will drive all four wheels via an M-engineered torque sensing differential with the rear axle featuring a more advanced electronically controlled torque vectoring system from the rear wheels to improve cornering grip. BMW X4M will also benefit from specific springs, bushes and damping rates.

Chassis engineering will pay special attention to the cars dynamics, engineers focusing on providing the X4M with a more sporting and dynamic character with emphasis on traction, poise and grip by comprehensively retuning the donor X3’s underpinnings.

The key to opening up the X4M to a wider audience is actually delivering a level of precision that matches that typical expectation of a BMW M car. Further developments inherited from the M3 will be the adoption of BMW M’s electro-mechanical steering which has been specially developed and adapted for M cars to reflect pure driver-car communication. Given the situation of the market BMW only see need for the X4M to be available with a revised M-DCT transmission albeit with altered ratios to suit the car.

With X6M only available as an automatic and the next generation also benefiting from an M-DCT, BMW do not see the justification for a manual given the scope of potential X4M markets. As like the M3, the X4M will also intensively feature BMW EfficientDynamics technology such as engine stop-start, brake energy regeneration and on-demand operation of engine ancillaries.

The overall look of the X4 very much takes its appearance from its larger X6 brother and is basically in overall concept a shrunken down version. X4 continues the more dynamic appearance with a low-wide stance and sleek profile. Height difference between the (current) X6 and X4 shows the X4 to be 40mm lower than its sibling.

The appearance is derived from the X3 but updates the details in terms of headlight placement and the addition of a more contemporary connected three-dimensional twin kidney grille. The X4M inherits typical M aerodynamics with a more emphasis on sharper outlines to conform with the more chiseled X4 image. A deeper front bumper with large ducts for effective cooling for the engine and brakes with a more current M-type kidney grille , exterior mirrors , subtle rear boot lid spoiler , traditional quad exhausts and in between them a functioning diffuser. The sharper look may conform more to form than function but it is truly the opposite here.

One of the biggest additions to the X4M will be the option of a full CFRP roof , a first for an X M model but will also be available for the X6M to provide the lowest possible center of gravity. Other weight reduction enhancements also include an aluminum intensive chassis and body panels.

The interior of the X4 will receive a modern contemporary interior of current BMW standards including revised upper dashboard to incorporate a floating flat screen monitor. Seating will accommodate five passengers with optional seating for four.

As well as a Fully-fledged BMW X4M, BMW are also investigating two options for their M Performance brand based on the X4. The first uses a detuned version of the N57S found within the M50d models, expected to be designated as M40d and a vehicle created to appeal to tax conscious and efficiency driven European market.

The second is a forthcoming upgraded N55 which is previewed in the BMW Zagato Concept Car, with power of 400 hp and part of the latest EfficientDynamics family the model is expected to wear an M40i badge. This engine is expected to appear first in the M Performance BMW Z4 in 2013 after the LCi car is unveiled at the NAIAS in January.

The BMW X3 could also take advantage of the M Performance engines.