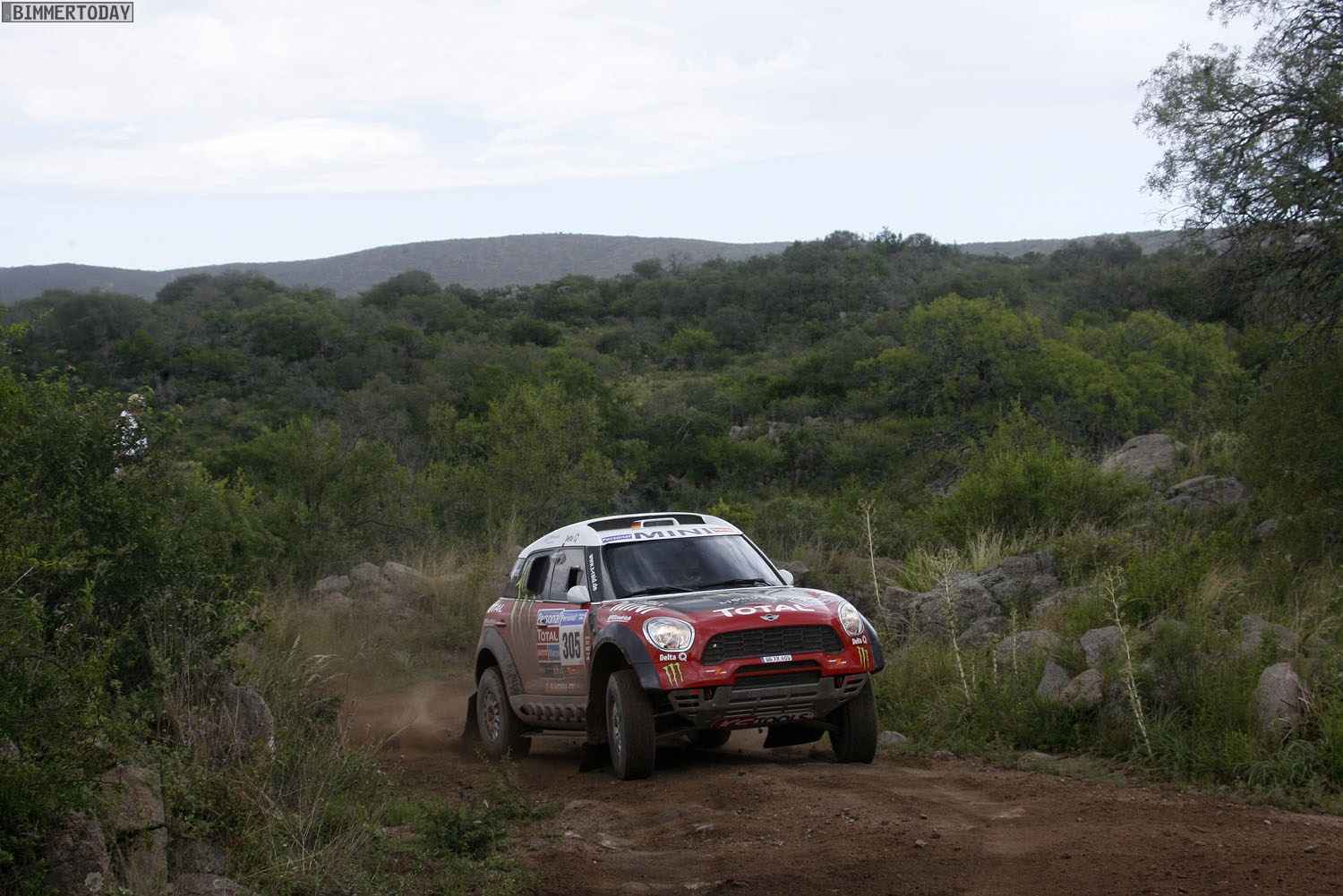 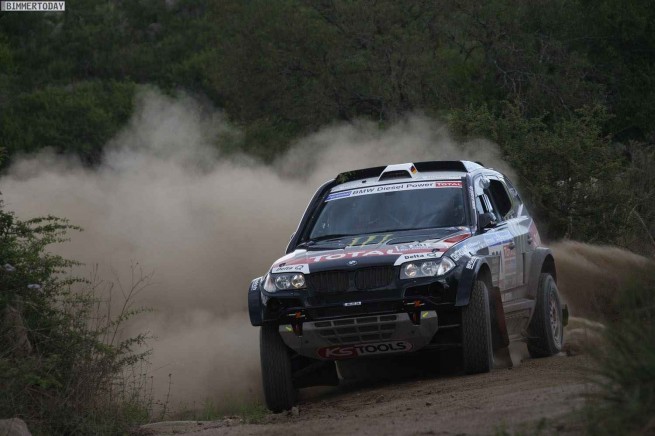 The pair were involved in a close fight throughout the day with overnight leader Carlos Sainz of Spain. The defending Dakar champion eventually clinched his second successive stage win and extended his overall advantage to 3m 05s, but Peterhansel maintained second overall with third on the stage.

“It was a stage with everything again,” said Peterhansel. “It was a very technical special, but nice to drive. It’s easy to be surprised by the tight bends and there were a lot of them. Everyone can have problems. Last year we had our fair share. I hope that this year we’ll manage to avoid them. Carlos (Sainz) has been slightly quicker than us and we’ll perhaps have to wait until the desert to find a chink in his armour”. 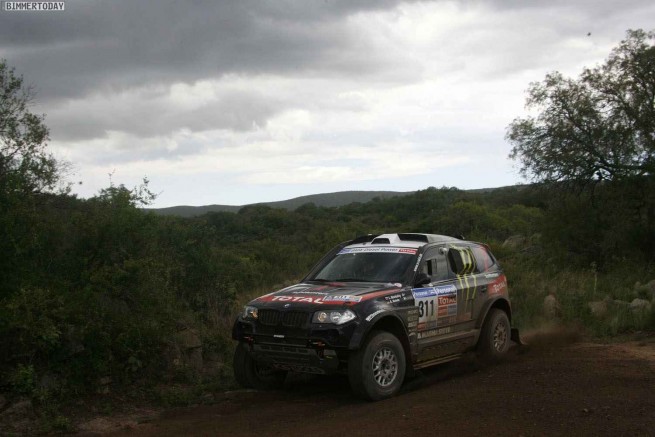 The other two front-running BMW X3 CCs and the Mini All4 Racing representing both the Monster Energy X-raid and X-raid teams completed the stage in fifth, sixth, and seventh positions.

This was a brand new competitive section for Dakar competitors and featured a separate route for the bikes and the cars, with the four-wheel competitors tackling a variety of bumpy tracks through bush-like vegetation, with the added hazard of deceptive, blind corners and slippery conditions in heavy rain over the early kilometers of the special.

Guerlain Chicherit and Michel Perin were classified in 78th position at the start of the day, but were granted a starting position of 21st on the road for the second stage on safety grounds after day one brake issues. 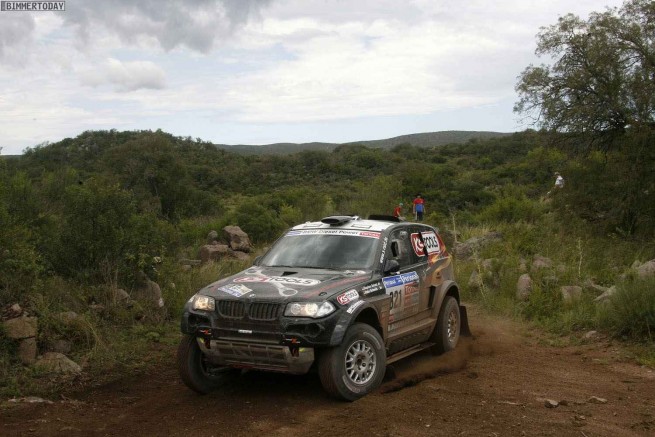 The Frenchman was in flying form early in the stage and held a virtual fifth position through PCs one and two in the Monster Energy-backed Mini All4 Racing. He completed the stage in seventh overall and surged back up the leader board to 23rd position.

Ricardo Leal Dos Santos and Paulo Fiùza started the day from 21st overall and 23rd on the road after stopping to assist Guerlain’s Chicherit for around 10 minutes on the opening stage. The Portuguese was into a good pace from the start and was 10th fastest through PC1 and PC2 in his Monster Energy BMW X3 CC and finished the section in ninth place and now holds 13th overall.

Leonid Novitskiy and Andreas Schulz started 10th and held 11th position through the first passage control and ninth through PC2. The Russian and his experienced German co-driver recorded the eighth fastest time and hold seventh in the general classification. 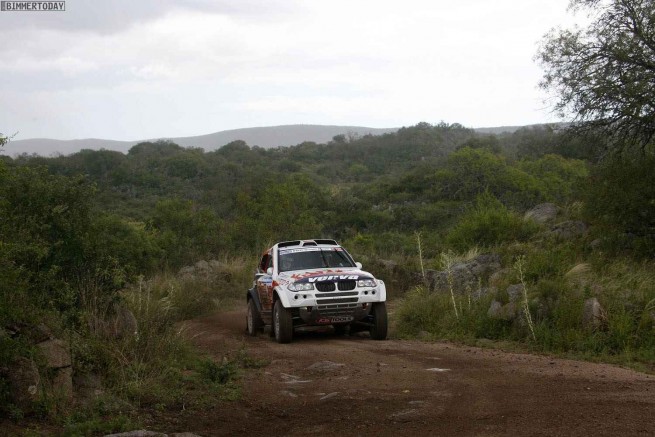 Krzysztof Holowczyc and Jean-Marc Fortin began the stage in sixth and slipped to seventh after PC1 before moving up to take sixth again at PC2. They finished the stage in sixth place and climbed to fifth in the overall standings.

Argentina’s Orlando Terranova and Portuguese co-driver Filipe Palmeiro began the day in seventh overall and a fine fifth on the special ensured that they reached the bivouac at the crowded hippodrome in San Miguel de Tucuman in sixth overall.

Stephan Schott and Holm Schmidt started the day in 24th overall and 26th on the road in their BMW X3 CC. The KS Tools-backed X-raid crew finished the special in 25th position and hold a similar place in the overall classification.

“It was a better day across the board for us, although it was a little disappointing that Stephane (Peterhansel) lost a little time at the end of the stage,” admitted team director Sven Quandt.

“The Mini was running very well, despite starting further behind, and we had six of our seven cars inside the top 10 today. There are reported to be some tricky sections in the stage on Monday, so we will need to be careful, but it’s pleasing to see Ricardo (Leal Dos Santos) running so well and keeping close to Stephane.”

Peterhansel maintained his second position in the classification through the first passage control, on a stage where American Mark Miller dropped over 20 minutes following an accident and Terranova started strongly.

Peterhansel reduced Sainz’s hold on the stage lead to just 41 seconds through PC2, although the Spaniard eventually won the section by 1m 03s from his Qatar’s team-mate Nasser Saleh Al-Attiyah when Peterhansel lost a handful of seconds near the finish. American Robbie Gordon was also badly delayed on the stage.

San Miguel de Tucuman is the capital of the Tucuman province and the fifth biggest city in Argentina. It was founded in 1565 by Spanish conquistador Diego de Villarroel during his expedition in Peru. The city sits on the slopes of the Aconquila mountains and produces large quantities of sugar cane, rice, fruit and tobacco for the regional economy.

Tomorrow (Tuesday) the Dakar caravan continues into run north towards San Salvador de Jujuy in the Andes foothills. This stage has been split into two competitive sections of 226km and 103km, includes a neutralisation link and will feature cliffs, canyons and river crossings before the terrain changes to forest and thicker vegetation at higher altitude.

San Salvador de Jujuy was a stopover point on the 1995 London-Mexico Rally, with the day’s route winding its way along the side of the Sierra de Aguas Calientes and skirting the popular tourist town of Salta.