Based on the MINI Clubman S, Schmidt Revolution creates their own version of the popular MINI, dubbed StreetWorker. The pimped-out Clubman S features a matte blue wrap, black accents, and 18-inch Cirrus wheels with Continental tires.

To give the car a Pimp My Car type of image, the Schmidt Revolution fitted a Streetec air suspension which can raise or lower the vehicle 40mm and 60mm, respectively.

Power-wise, the custom MINI has a tuned up engine that produces 200 horsepower and 184 lb-ft of torque. Top speed? 137 mph. 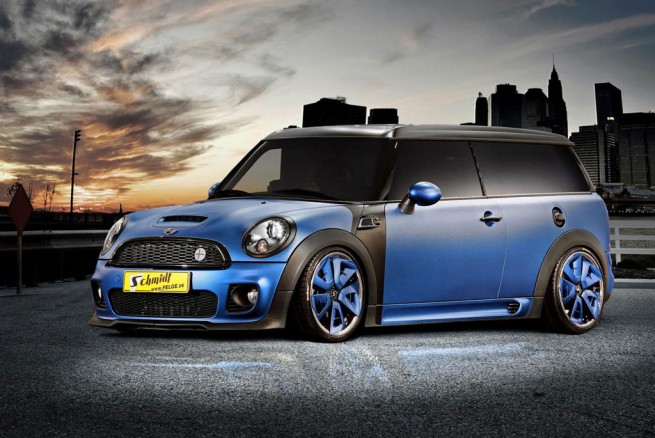 Press Release: In a kind of competition from the Fiat 500, the Toyota IQ and others in its class, the Mini Cooper Clubman S prevailed with style and passion. In fact, the Schmidt Revolution, wheel manufacturer from Bad Segeberg, had taken on the task of providing a concept car with Urban Lifestyle tuning. With its Clubdoor, the engine and the concept of space, it is practically the perfect choice for this task.

The “genetically engineered” Mini, already equipped with a John Cooper Works Aerodynamic package, has been purchased in March 2010. With black xenon lamps including daytime running lights and after a performance increase to 200 hp and torque of 250 Nm – these two parameters allow the Clubman to reach a maximum speed of 220 km/h – the car is ready for city travel, at least for trips around the church tower. 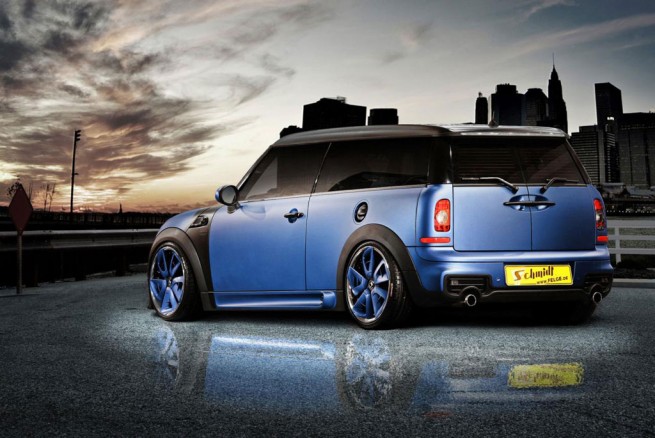 The colors still harbored some problems in it, should the Mini yet actually be equipped with chrome foil. Rethinking was not easy for the men from A4M in Wuppertal; the BMW sprout has a matt blue car wrap, and then they returned back to immaculacy.

Street workers usually go a lot, so the “feet” and “shoes” require special attention The Cirrus wheels were decorated with colored multiplex material, so this fun car is never left unattended in city traffic. The really impressive 8Jx18H2 Cirrus rims have any of 3D-shaped multiplex patterns in matte blue; any tint of body color, from bright red to carbon black is possible at any style. 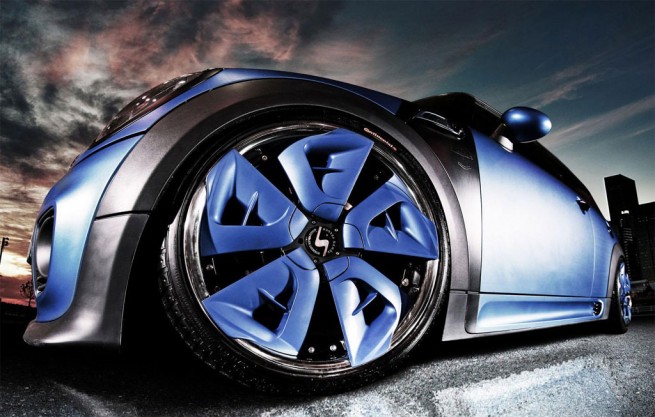 Cheap tires, causing annoying road noise, were changed with recapped 215/35R18 Conti tires, and the tire problem was solved. To allow for changing “obstacles” while impressive driving in city traffic, the concept car has a Streetec air suspension with press buttons which enables to adjust the height and make it 60 mm lower or 40 mm higher than the serial cars. The goal was to run over thresholds better and to park the Clubman easier.

Finally, it should also be mentioned that the spectacular rims are completely washable and thus are suitable for daily use.

So, that beautiful Urban Lifestyle can be a street worker…