We’ve had a sneak peek at BMW’s latest M, the 1 Series M (what happened to the 1M?). While hopefully you’re reading this after the embargo has been lifted, it’s quite possible that the embargo has been broken and you’ve already seen the specifications and images by now.

The press release notes that the newest M has been in development for two years (for the US market it means as soon as the 1er went on sale here, BMW was planning the 1 Series M). The chassis, compared to the 135i, is 77 pounds lighter, has a wider track (front & rear) and is just a tick longer. The car also foregoes the nominal sunroof for a 35 pound weight saving. The roof is all steel (no carbon fiber). Of course losing 35 pounds at the peak height of the car is a good thing.

BMW has chosen to highlight the driving dynamics of the 1 Series M and tout that it has a “chassis faster than its engine”. And given that the 1 Series M engine has has its horsepower bumped just about 10% above the 135i, maybe they need to sell that line hard. Regardless of the modified N54, whose numbers echo the Z4 sDrive 35is, the extensive use of M3 aluminum suspension bits will have a major impact on feel (and unsprung weight!). BMW has thankfully retained the hydraulically assisted power steering rack for the 1 Series M.

The 1 Series M will only be available with a six speed manual transmission. And this transmission has been specifically designed to handle high torque output. It also utilizes a dry sump cooling system. A good short throw shifter couples the driver’s hand to the gearbox and the final drive ratio is 3.15:1.

Getting the power down coming out of corners will be much more fun now that BMW has provided an appropriate limited slip diff. They’ve retained the services of the M3 unit which utilizes a viscous/clutch-pack torque transferring mechanism. It works well in the M3 and should also in the somewhat lighter 1 Series M.

The braking system now incorporates cross-drilled rotors, 14.2 inches up front and 13.8 inches in the rear. And that speaks at the weight distribution of the 1 Sereis M, it’s slightly less than 52% weight up front. Pretty close to ideal actually.

The engine is rated at 335 HP at 5900 RPM and 332 lb-ft of torque from 1500 to 4500 RPM. An additional 37 lb-ft of torque is available in temporary ‘overboost’ mode whilst under full load. BMW has taken pains to ensure that the cooling capacity for all fluids (engine coolant, charge air, and engine oil) is more than adequate. The front fascia has been designed to get air into the appropriate radiators and also, and a first on a BMW production vehicle, it provides an ‘air curtain’ to reduce the effects of the widened front track. 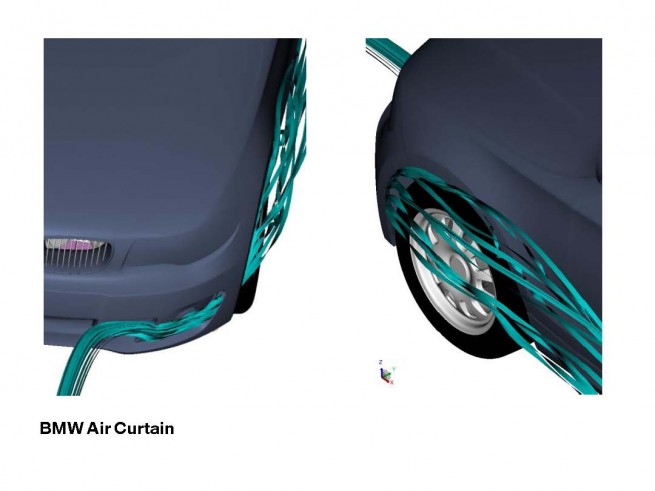 The ‘air curtain’ squeezes air passing through openings in the front fascia and directs a high speed stream of air across the side of the front wheels and acts as a curtain to separate the turbulent flow of air from the wheels interrupting the flow of air around the side of the car. This is good use of wind tunnel time and expect to see it utilized more in the future.

Thanks to the 1 Series M’s wider track, the fenders have to pushed out, and the front and rear fascia have had to be enhanced as well. The 1 Series M utilizes quad exhaust outlets (whose acoustic signature BMW has
spent a fair amount of time optimizing).

The interior has some subtle differences from the 135i including orange contrasting stitching and Alcantara accents in place of the wood or aluminum trim pieces. The seats are upholstered in Boston leather and we’d have wished for Alcantara there. There is the usual bit of M trim bits scattered through the interior and for driving dynamics the M Dynamic Mode is just a button push away.

But after all that the question remains, is this a parts bin exercise or is it a true M car? Is it a collection of M suspension bits, the M3 rear diff, and a mildly tweaked N54B30 engine (ala Z4 35is)? Or is the whole greater than the sum of the parts? We’ll need to spend some time behind the wheel before coming to any definite conclusion.