ARKYM shares with us their race track experience aboard the AeroRace ONE BMW M3 and how the beloved bimmer measured against faster cars.

“See how our beloved M3 measures up with the Big Boys on the Track.

While probably one of the most unorthodox methods of strategic partnerships to come to fruition, this one non-chalantly began with an exchange of keys — ARKYM AeroRace ONE’s pair…

Introducing BBi Autosport – quite possibly Orange County’s best kept secret and trusted authority on all things Porsche Motorsport related. Regarded by select clientele as being the number one source of Porsche service and aftermarket support, BBi and its expert staff also support many local track and rally events with instruction (OC RaceCraft, for instance) to provide direct working knowledge of one’s car to its customer.

“[Motorsport] pride and glory runs through these veins…”, says founder Betim Berisha, as he motions to his crew. “We’ve got a track day this weekend, lets see what [this] thing can do.” And the deal was sealed having granted Berisha free will to ‘test’ as he pleases at Spring Mountain Motorsports Ranch 11/20-11/21 in Pahrump, Nevada.

Enter Spring Mountain weekend. After a quick turn in to Interstate 127 from traffic-ridden 15N, a brisk and adventurous triple-digit canyon run “back road” comes to an end, but not without a warm and gracious welcome from our good friends at DCMotors, Doug and Nicole, who had prepared a small enthusiast track-gathering between BBi Autosport, its customers, a few P-car aficionados from Exotics Boutique, and Radical-only drivers (see below).

After an LA-to-NV warm-up lap, ARKYM’s AeroRace ONE was now ready and willing to experience the physical definition of “aerodynamic theory” on a fast and equally furious track configuration. One could definitely sense a tense and energetic excitement among the group from the varied first-timer to seasoned track rat. Berisha’s unspoken-of reputation humbles many of them as his presence automatically positions him far to the right edge of this spectrum… 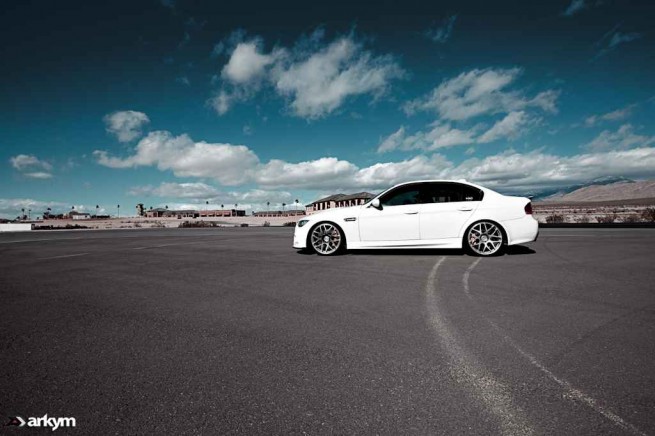 “They’ve opened up all the fast parts of the track tomorrow, rain or shine, three long straights, a few turns and ‘ego check’ (turn 4R) is basically what it comes down to”, says DCMotors’ Nicole, who’s been given the “Lady Stig” moniker with her GT-R.

After a surprisingly Radical-Driver dominated comprehensive driver’s meeting at 7:30AM, Arkym ONE (the only ///M and BMW in this weekend’s appearance) went through basic system’s checks, received an absolutely confident “all clear” from Roman/ESS Tuning, outfitted with GoPro media equipment, and was ready to hit Pahrump’s fastest asphalt with Berisha as it’s eager pilot along with the following vehicles (which had presumably entered the same lapping session):

AeroRace ONE was left last entered into the session against the pack.

Bear in mind that ONE had not received any further track suitable upgrades different from its SEMA debut other than a quick BBi alignment, tire psi adjustment, and a fresh tank of local Spring Mountain 91 Octane. ONE is piloted by Berisha in full interior street trim (and still currently), with no missing seats, or lighter substitutes to its 20″ HRE performance alloys. Hankook ES V12 Evo tires took the party to the track and back. 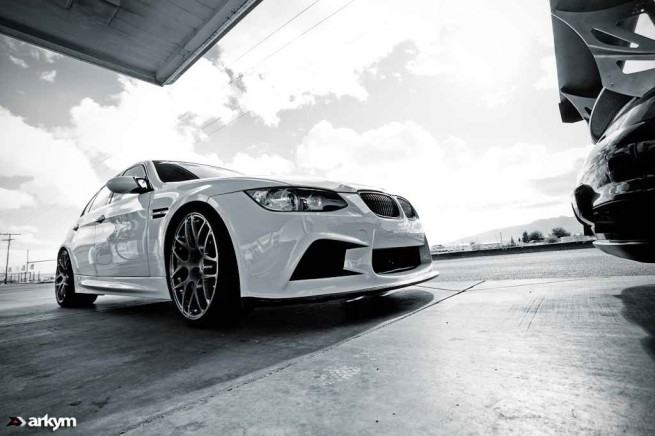 It was almost like hiring the highest paid A.I. driver available for Drivatar use in XBOX’s Forza Motorsport 3, but with live, critical and albeit useful in-car commentary… “Go Baby, Go!” as the Lotus urged the point-by to Berisha. Exhilarating are the dangerously-close, yet consistently smooth and repeatable segments of track edge flying by. The man’s got a grin on his face as he comments on the ONE’s weight and comparatively lightweight suspension setup amongst the runners. “We’ve got some work to do on the rear, but I’ll hustle her around the track” as Berisha feels out the OEM sway bars. Quickly sneaking upon the CS, he wonders if something was wrong with it, rather than believing it to be piloted by a novice.

During the brief (and more talkative) straightaway sections, Berisha would comment on the sturdy, planted feel of the additional Arkym carbon aero. “We’re using all of it to our advantage, believe me”, as he glances over the dash to observe all four stable corners of the double-sided race hood, “those vents are doing work, can they be opened up a bit more?” Of course.

In another lap and a half we came upon the long-lost pack of P-Cars and GT-R. GT2 and 997T seem to have been locked within their own battle by avoiding passes or pointby’s with each other, leaving not much track width for an easy squeeze. Luckily, as the GT2 had let off in a non-acute turn, we were able to sneak by and go for the big, stubborn fish that was the 997 Turbo (high horsepower modified). “That thing gets out of the hole quick, doesn’t it?!” He would know, though since he had built every aspect of its track performance except for its Cargraphic headers. Pressure, persistence and quick instincts to a turning point place the ONE in between this monster 997T and GT3RS track traffic in what can simply be described as a diving BBK late brake move after a fast straightaway. Surprised, we were certain to be paying for it when tending to the bright orange GT3RS and distant GT-R…

A few time saving maneuvers later, we were upon the GT3RS which had obliged a friendly right point-by. And we can only assume that the GT-R had equally followed suit with its driver observing the rearview climb of the ONE to its wanted prime position. With no time wasted, Berisha was now “free to play”.

“That’s all she wrote for the brakes!”*

AeroRace one is equipped with 380mm Brembo GTs on all 4 corners… yet during these driving conditions and a sedan tipping the scales, they were noticeably in need of further cooling a project discussed earlier during our meet and greet week with BBi. Approaching ‘Ego Check’, Berisha exclaims, “I’m kicking firewall here and nothing, see that? Easy does it…” While checking corner entry speeds carefully, we consider a possible motorsport-only upgrade from Arkym in the near future.*

As the checkered flag approaches and the high-speed laps come to an end, a quiet, confident moment solidifies a working relationship between a performance partner and a carbon manufacturer. “I think we’ve got lots to do here. And this [taxi]…” as he taps the steering wheel, “is a great start.”

A “sideways session” on the Spring Mountain skidpad breaks up the hour and a half wait between racing classes – more than enough time to document lit up Hankooks under the supercharged sedan. After a few quick test sprints, Berisha could be seen grinning from steer to countersteer. That is, of course, once the white tire smoke clears to provide a clear view. “It’s the thing about these V8s you know? Just throw it into third and get it out of control – I love it.”*

Once again, even under the most grueling and downright abusive conditions, observers were quick to point out the ONE’s aggressive mean look with its outfitted carbon aero withstood every second of their sideways lives. The owner of the black GT2, excited enough to observe the skidpad display had tossed the keys to Berisha for a try. “Could you make this thing on slicks drift?” And sure enough, it too observed a sideways adventure…

More honorable lap sessions followed while rain began pouring down. But it didn’t stop the only 4 cars capable of running in the wet – the GT3RS, GT-R, a late entry red GT3 and the lone ///M3 Taxi. Fortunately, and while living up to its new BBi given nickname, the Taxi took along 3 extra passengers who wouldn’t miss a wet session for the world (the drivers of the cars unable to drive in the rain, of course). Of all the sessions, this one was considered to be the most “fun” amongst the group.

In the clubhouse, there was much talk of the “white 3-series/”M5″/driver of the M3” (examples of some of the overheard comments) that evening as Radical racers and enthusiasts approached the DC Motors round table looking for Betim Berisha. “Sir, were you driving that white M3?” “That was me”, nods Berisha. “You know you have to make it home, right?” A gentle exchange of grins and handshakes from gentleman to gentleman follow.

Day 2 was quick and with a few laps to extinguish the weekend from our systems, we were off to visit the local shell one last time before the longhaul. In observance of a newly found Porsche motorsport collaboration and strategic partnership with BBi Autosport and Arkym, there will be even more exciting product developments in the future, especially on different platforms, comprehensively within BMW aftermarket handling products and Porsche Aero. It is an honor and pleasure to be involved with the experts at BBi Autosport.