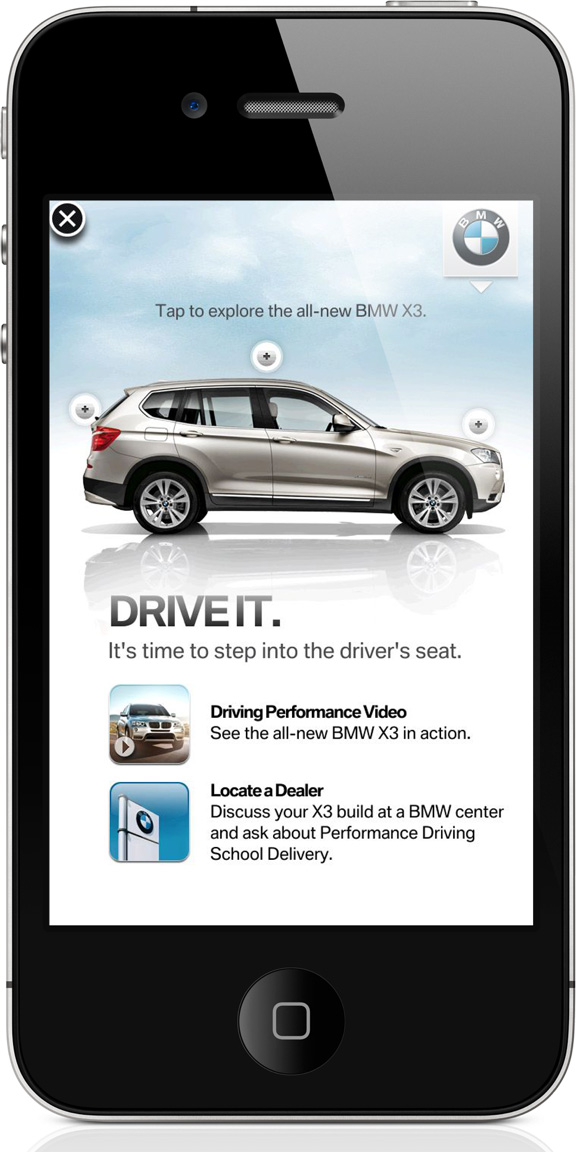 The focus of the iAD is BMW’s built-to-order program that allows customers to create an entirely customized BMW X3. The iAd, the primary mobile component of the X3’s marketing campaign, allows an individual to go from dreaming about a new custom-built X3 to having it delivered to their driveway in just a few weeks.

The X3 iAD, which was created by Dotglu, BMW’s Interactive & CRM Agency, has three components: Dream It, Build It, Drive It. 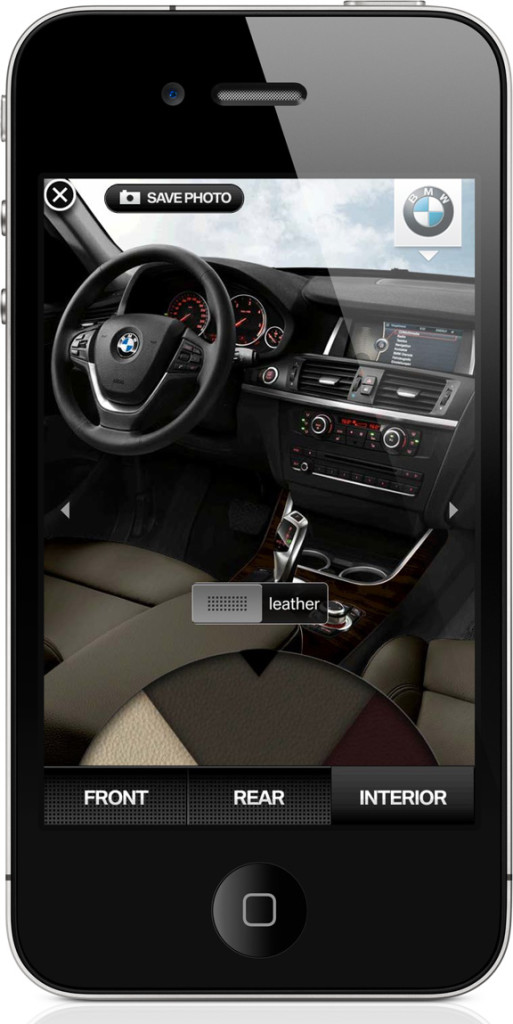 “Dream It”
Each dream was specially selected from hundreds of real submissions on the BMW USA Facebook page over the weeks leading up to the iAd’s launch – and represent how the X3 will impact people’s lives and how they wish to make it their own. The ‘shake’ feature on iPhone and iPod touch allows users to browse each dream and various X3 color options, or tap to read the entire story.

Users submit their dream, which can then be shared with the BMW community through the iAd.

“Build It”
Here, users begin exploring some of the X3’s 70 million unique configurations on the iAd. Colors and wheels can be changed, as well as the vehicle’s angle. iPhone and iPod Touch users can even go inside and choose interior options, including a variety of trims and leathers. By swiping, one can change the X3’s environment from a cityscape to mountains, and more, emphasizing the X3’s versatility for various lifestyles. Each action used in the iAd is completely intuitive to the general functionality of the iPhone and iPod touch.

At any time, users can save their custom, all-new X3 as a background. This is the first time ever that a user can customize their own car using iPhone and iPod touch functionality and save it directly to the device.

“Drive It”
Now it is time to get in the driver’s seat. To learn more about what’s in store, watch the all-new X3 in action by browsing video content and downloading images from a gallery of hi-res wallpapers.

Or locate a dealer to discuss the build that was already started from the iPhone or iPod touch. Simply use the GPS-enabled devises to find the nearest BMW center, or enter a preferred zip code. Users can even sign up and receive the latest news, model launch dates and more.

Once finished exploring the BMW X3 iAd, the user taps the close button and return to the app they were using, completely uninterrupted.

In 2004 BMW introduced a new concept to the market: the small, premium Sports Activity Vehicle with all-road capability and unparalleled driving dynamics. The first generation BMW X3 became a best seller and the new, second generation BMW X3 builds on the success of the original, now with significantly increased space, functionality, efficiency and driving comfort. The new BMW X3 was designed in California by BMW Group DesignWorksUSA and is produced at BMW’s Spartanburg, South Carolina plant. The all-new X3 will go on sale at US BMW centers in January 2011. 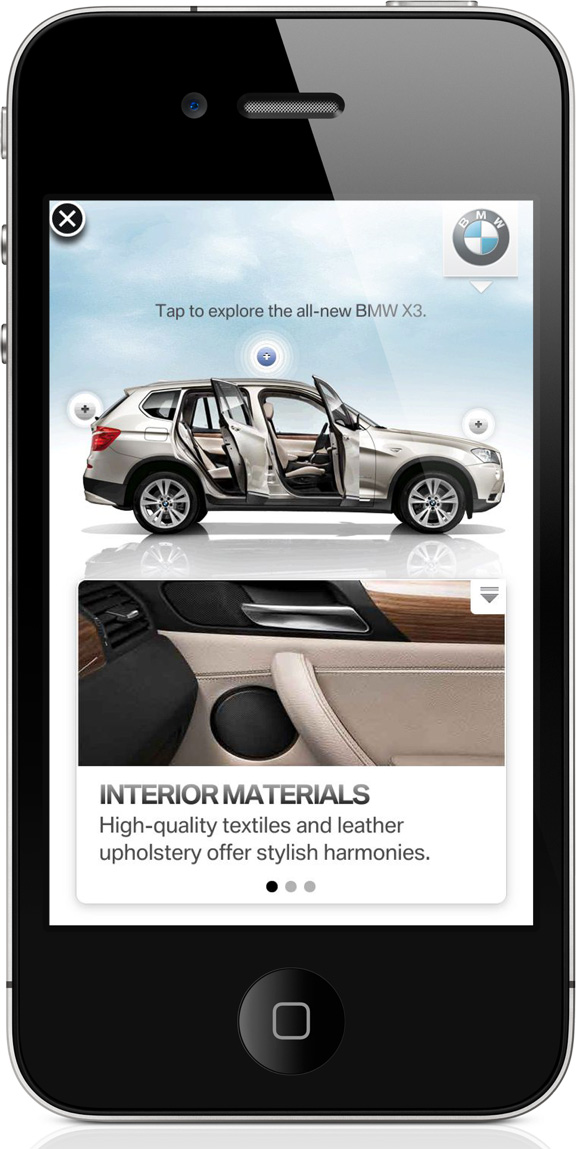 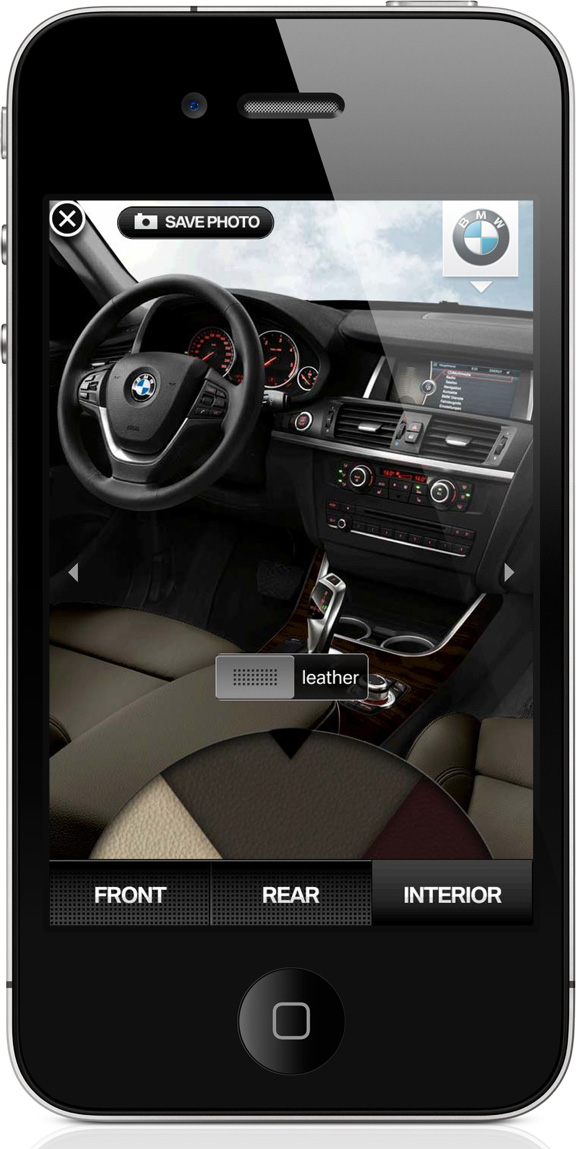 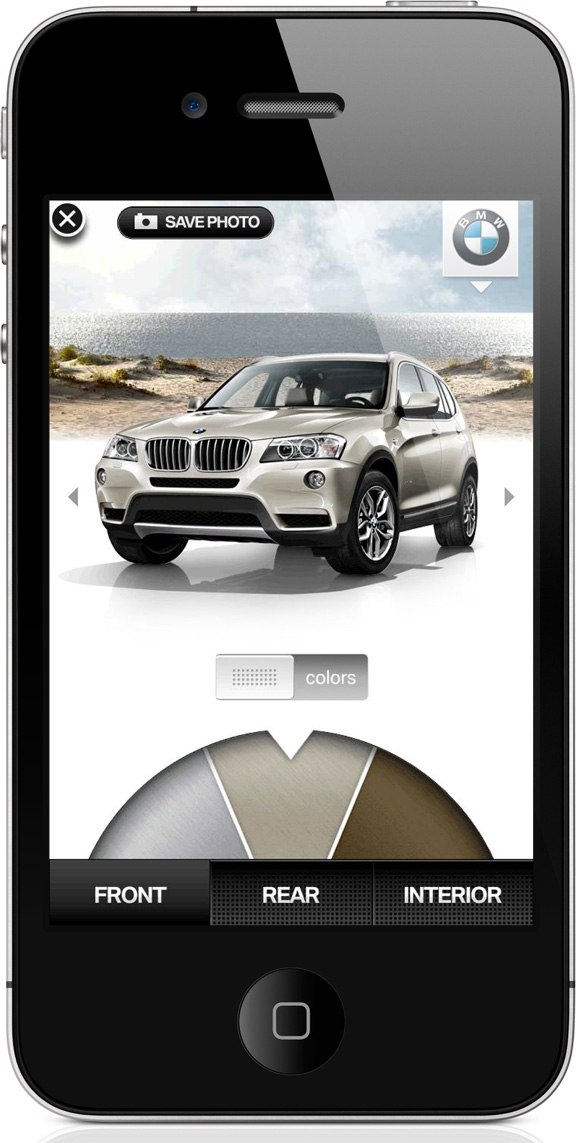