Our friends over at IND-Distribution bring us one of their newest adventures. After visiting Germany and the Einsenmann facility and after working on several interesting projects, they decided to take their skills internationally.

In their latest trip, the IND boys visited India and had lots of things to share with us.

Of all the companies modifying BMW cars today, IND may be the strangest. Most businesses will jump at the chance to sell any part and work on any car, but at IND this is not the case. Our chief function as a business is to represent Eisenmann GmbH in the U.S, and we do not take this lightly. Take on too many side jobs, too many projects, and you lose focus as a business. Quality starts to decline, and so we learned quickly that it is better to do a few things exceptionally than to do many things poorly.

This is precisely what makes IND strange. We will not work on every car owned by every client, and we will not install every part just to make a dollar. Our preferred clients are not simply the individuals who have spent the most money with us, but rather people who share a fundamental philosophy on the automotive hobby we love. We would travel to the end of the earth to help our best clients, and this month’s story is the most literal interpretation of that promise to date.

Our client, Mr Singh, is a unique individual. Having been a true car enthusiast for years, he knows exactly what he wants, and will stop at nothing to get it. Despite residing in a country that makes being a car enthusiast quite difficult, our client had one of the first LP640 Lamborghinis imported into India. When ESS’ amazing VT2-600 supercharger kit was released for the E9x M3, our client consulted with us and imported the kit immediately and was the first to have an ESS M3 in India. His collection of exotic cars represents his love for the automobile.

Of all of the cars in Mr. Singh’s collection, one in particular proved to be the biggest challenge. One car was so difficult to import, modify, and enjoy that it nearly bested our client. This car is the Nissan GTR. Just purchasing the car involved a series of cancelled orders and took our client all the way to London, where the GTR in question was finally acquired.

After purchasing the GTR, Mr. Singh knew he could not simply leave it as is. To compete among his collection, the GTR had to be a true giant killer and the standard power output simply would not suffice. The GTR continued to be a difficult beast to tame in this respect also- not only are there no GTR specialist shops in India, but to extract true power from the car, it is ideal to have access to an all wheel drive dyno. Finding an all wheel drive dyno facility is no easy task, and Mr. Singh once again proved his unwavering determination by immediately initiating the import of India’s first all wheel dyno!

To complete the recipe for the for India’s fastest GTR, we knew we could only contact the best shop dealing with Japanese cars in the US- AMS Performance. Not only are the people at AMS absolute experts in forced induction and all wheel drive systems, the staff of AMS are close personal friends of ours, and are the absolute most trustworthy people for the job. With AMS on board, we knew we had a winning formula. We soon formulated a plan that involved multiple intercontinental voyages, thousands of dollars in parts, custom tailored tunes, and hours of effort, all designed to build India’s fastest GTR.

Together, we made the 15 hour flight directly to India’s Delhi International airport, where we awaited the next leg of our journey to Mr. Singh’s home city of Chandigarh.

Stepping off the airplane’s taxi ladder onto the runway was an instant reminder of just how far we were from home. The sweltering air feels thick with moisture and envelops you as soon as the airplane door opens. The very smell and sight of India embeds in you the knowledge that you are in one of the earliest strongholds of modern civilization, a place of incredible philosophical and religious history.

An old friend greeted us as soon as we exited the airport: one of the first projects IND helped Mr. Singh construct, an ESS Supercharged E92 M3. This was the first time we had actually seen the car in person, despite having provided all of the parts, so of course the experience was very rewarding. 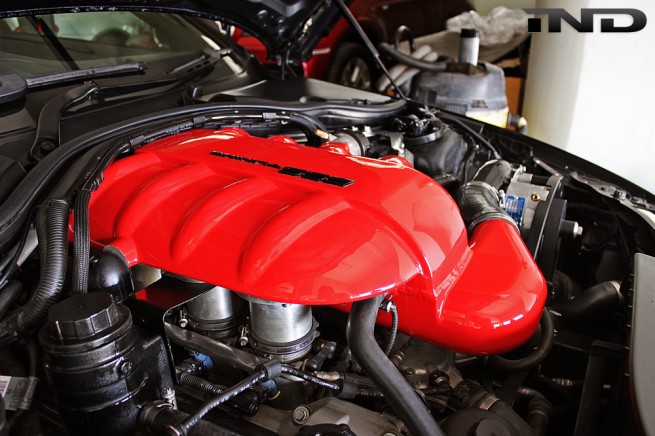 As we made our photo stops along the way to the famous MountView hotel, we were exposed to a culture and lifestyle that felt truly foreign to us. The environment and landscape in urban India presented scenes that are completely unfamiliar to Western eyes. I felt truly privileged to experience India first hand.

The cool, fresh atmosphere of the MountView hotel was a welcome departure from Chandigarh’s enveloping heat. The décor was stunning, the staff friendly, and the rooms extremely comfortable. Mr. Singh was ensuring that we were in the most comfortable of accommodations, and his generous personality made us feel as though each of our needs and wants were met.

The following day we had the opportunity to stop by Mr. Singh’s residence and have a look at a couple of the English cars in his collection. Between the Range Rover AutoBiography edition and the Aston Martin DB-S I got the distinct impression that the English were still at the top of their game. The level of workmanship on the exterior and most importantly the interior of these two cars was something that is difficult to find in the modern world.


Mr. Singh’s friends at his local BMW dealer were kind enough to provide us an install facility. The beautiful tiled floors and air conditioned garages were a stark contrast to the streets of Chandigarh.

Mr. Singh’s GTR pulled into the shop with a stealthy rumble, and my hair stood in anticipation. I knew that after several day’s work we would transform the already formidable GTR into a true monster. As the car ascended the lift, I could only imagine the rush of acceleration to come.

AMS’ downpipes, coupled with the rest of the full exhaust system provide a formidable gain, but these parts alone are not quite enough to achieve the supercar-beating 600 horsepower offered by the Alpha 6 kit.

AMS removed the factory intercoolers and replaces the two piece unit with a huge single piece bar and plate style intercooler. The AMS one piece intercooler is rated to 1200hp!

The final step of AMS’ hardware package for Mr. Singh was a piece brought in by special request- upgraded fuel injectors. While these are not required hardware for the Alpha 6 kit, Mr. Singh’s GTR is not staying at the Alpha 6 power level for long, and the IND and AMS teams will soon revisit India for the next step.

We all listened intently as the GTR was lowered from it’s perch on the shop lift. We knew that the roar that was about to emanate from the four exhaust tips would be deafening, and the whole team was excited to begin the most critical phase of the job- the custom ECU tune that would set this GTR apart from any other.

As AMS’ head software engineering Chris Black rode with Mr. Singh through the streets of India, all of us trailing the car could tell that the GTR was changed forever, and that Mr. Singh was addicted to the outright violent acceleration the car now provided. We were nearly ready to leave India, but we knew we would return soon to make this GTR the ultimate street weapon.