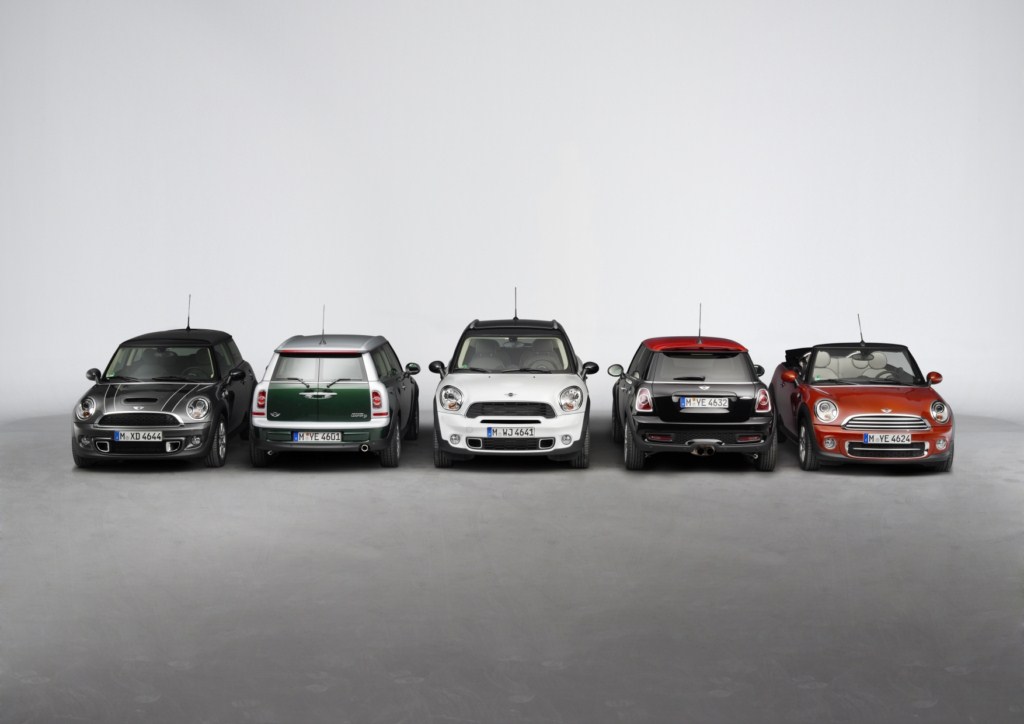 Tomorrow, MINI launches to market the most wide-ranging line-up since its revamp in 2011. Along with the updated versions of the MINI, Clubman and Convertible, the Oxford-based company also launches the Countryman, company’s crossover that will boost the sales.

In preparation for the launch, BMW releases some comprehensive information on the changes coming in the 2011 models.

“With the presentation of the latest and most wide-ranging model line-up since its relaunch in 2001, the MINI brand is beginning a new chapter in its successful history as the originator of the premium small car segment. The market introduction of the new MINI family will be joined on 18 September 2010 by the sales launch of the brand’s fourth model, the MINI Countryman. The updated versions of the MINI, MINI Clubman and MINI Convertible cut a more stylish figure than ever, boast unsurpassed agility and achieve even higher levels of efficiency than before. With its four doors and large tailgate, extra space and – as an option – all-wheel drive, the MINI Countryman delivers totally new ways of experiencing the driving fun typical of the brand. 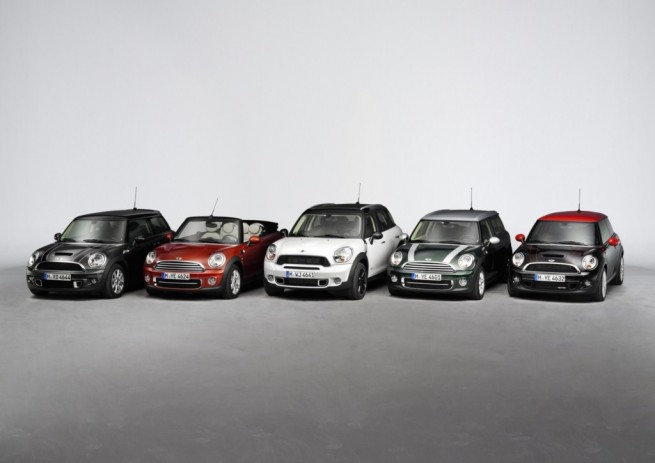 All of which takes the diversity of the MINI model range into a new dimension. For example, the MINI can now be ordered with a choice of five petrol and two diesel engines developing between 55 kW/75 hp and 155 kW/211 hp. Three petrol units and two diesel variants are available for the MINI Countryman, and two of the engines can also be combined with the MINI ALL4 all-wheel-drive system. Meanwhile, the further extended range of optional extras and the selection of exterior paint finishes, interior colours, upholstery variants, trim elements and Colour Lines – which allow every MINI to become a personally configured one-off – set new standards in the segment once again.

In the tenth year since the brand was relaunched, MINI has been able to further strengthen its position as the original premium small car. MINI broke new ground as the first ever maker of premium small cars, and its lasting impact can be seen in the current trends in this segment of the market. The underlying principle that helps give every MINI its authentic character is still unique. MINI remains the only maker of premium small cars whose models are based on independently developed concepts exclusive to the brand. The stand-alone identity of the MINI defines both the charisma and product substance of all MINI models, constituting a major factor in the success of the brand – as reflected by global sales of more than 1.7 million cars since 2001.

The new MINI family: expressive, agile and more efficient than ever. 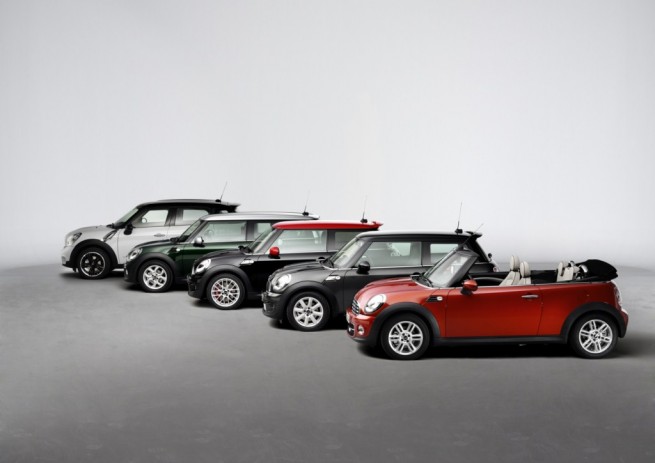 New engines, a cleverly modified design and additional innovative equipment features enhance the appeal of the MINI, MINI Clubman and MINI Convertible. The appearance of all the members of the new MINI family expresses their sporting character more strikingly than ever, while under the bonnet, the new-generation petrol engines already in place are now joined by all-new diesel units to deliver another boost to efficiency. Based on the BMW Group’s drive system expertise, the four-cylinder engines offer a further optimised blend of driving fun and fuel economy. The MINI Cooper D and MINI One D, in particular, have raised their game, posting CO2 emissions of 99 grams per km combined with fuel consumption of 3.8 litres per 100 km (74.3 mpg imp) in the EU test cycle.

The other newcomer to the range is the MINI One D Clubman. The new entry-level diesel engine now also gives the Clubman unsurpassed levels of fuel economy. The new MINI One D Clubman sprints from 0 to 100 km/h (62 mph) in 11.8 seconds, burns an average of 3.9 litres of fuel per 100 km (72.4 mpg imp) in the EU test cycle and emits 103 g/km of CO2.

A total of eight model variants are available for the MINI alone, all of which meet the EU5 exhaust standard and use an extensive, model-specific combination of MINIMALISM technology – such as the Auto Start/Stop function, Shift Point Display, Brake Energy Regeneration and electromechanical power steering – to deliver an exceptionally fine balance of driving fun and fuel consumption. The MINI One MINIMALIST, available in two variants, has the lowest fuel consumption and emissions of all the petrol-engine models. It can be ordered with output of either 55 kW/75 hp or 72 kW/98 hp, both options claiming average fuel consumption of 5.1 litres per 100 km (55.4 mpg imp) and CO2 emissions of 119 g/km. 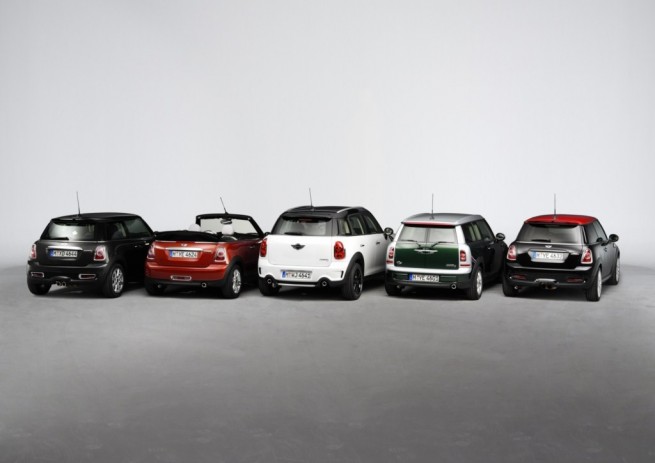 The latest evidence of the brand’s extraordinary potential comes with the launch of the MINI Countryman. For the first time, a MINI can boast four doors and a large tailgate, as well as a versatile interior offering space for up to five occupants. Added to which, the MINI Countryman is the brand’s first model with a body measuring over four metres and which can be equipped with ALL4 all-wheel drive as an option. The MINI Countryman is also the world’s first and only premium car of its kind. The crossover model’s wide range of qualities allows it to cross the boundaries of urban mobility to take the trademark MINI feeling into new dimensions and win over additional target groups.

From the first glance, the MINI Countryman strikes you as unique, powerful, robust and versatile. Equally eye-catching are its hallmark brand design elements and proportions. This combination allows the brand’s fourth model to bridge the gap between the classical concept of the MINI and a cutting-edge Sports Activity Vehicle. The driving characteristics of the MINI Countryman also betray its family roots. Like all the brand’s models, the Countryman has the most agile handling in its segment. Its high-class chassis technology and precise yet efficient electromechanical power steering deliver the familiar MINI go-kart feeling, which is given a new angle by the raised seating position and optional ALL4 all-wheel-drive system.Technology including the standard-fitted Dynamic Stability Control (DSC) system ensures the MINI Countryman has unbeatable active safety.

The MINI Countryman is available from launch with three petrol and two diesel engines. The selection of petrol variants ranges from the MINI One Countryman with 72 kW/98 hp and MINI Cooper Countryman developing 90 kW/122 hp, through to the 135 kW/184 hp MINI Cooper S Countryman, whose 1.6-litre four-cylinder powerplant is the most efficient engine in its displacement class. The petrol models are joined in the line-up by the MINI Cooper D Countryman (82 kW/112 hp) and MINI One D Countryman (66 kW/90 hp) diesel variants.

Every MINI is built according to individual customer specification. The extraordinary wealth of model variants offers extensive potential for detailed configurations in keeping with the customer’s personal style. The market launch of the new MINI family and MINI Countryman brings with it further additions to the selection of exterior paint finishes, roof/soft-top colours, alloy wheels, upholstery options and interior variations, as well as an even more extensive range of optional extras and accessories.

Both the MINI, MINI Clubman and MINI Convertible and the MINI Countryman are now all also available with Adaptive Headlights in conjunction with the optional xenon units. This technology adjusts the beam angle of the headlights to the path of each corner by tracking the steering angle of the car. Meanwhile, high-quality audio and navigation systems enhance driving pleasure and comfort both in urban traffic conditions and on journeys beyond the city limits.

In place of a conventional centre console, the MINI Countryman also comes with an innovative rail system between the seats: the unique MINI Centre Rail allows personal items to be kept within reach at all times when on the move. Storage compartments and brackets can be securely fixed to the rail with the help of a specially developed clip-in attachment system.

Added to which, the MINI Centre Rail creates a visual and functional connection between the front and rear seats.

The innovative functions of MINI Connected enable the entertainment and communications equipment in all MINI models to set new standards. MINI Connected enhances driving pleasure through the intelligent link-up of the driver, his MINI and the outside world. MINI is the world’s first car manufacturer to offer, as part of its MINI Connected concept, a newly developed USB interface which uses its unparalleled range of functionality to maximise the integration of the Apple iPhone into the car’s audio and infotainment system. An application available for MINI Connected comprises a web radio function, the use of Google local search and Google Send to Car services, as well as reception of RSS news feeds. It also enables Facebook and Twitter posts to be displayed on the on-board monitor and allows the user to send standardised text messages.

Another special feature which fits right in with the MINI style is the Mission Control function. This system analyses a host of signals relating to the vehicle itself, the driving situation and the vehicle’s surroundings to supply the driver with relevant information and advice – all generated in dialogue form. These dialogues are based, among other things, on information regarding safety and comfort settings. They request that the driver and passengers buckle up their seatbelts, for example, and instruct them on the use of the air conditioning system. They also incorporate up-to-date information on driving conditions and the current status of the vehicle – such as outside temperature and the amount of fuel in the tank.

The additional functions integrated into the MINI are activated and operated via the on-board control system. To use the full range of MINI Connected functions, customers need to specify their cars with either the MINI Visual Boost radio or the MINI navigation system. Both options use a high-resolution colour display in the Centre Speedo and the MINI joystick positioned on the centre console to ensure comfortable, easy and intuitive operation.

Driving fun and efficiency, characteristic design and individual style, quality and advanced technology form the basis for that unmistakable MINI feeling. In addition, identification with the history of the brand – which stretches back to 1959 – also contributes to the authentic character of MINI models, which has captivated people around the world. Its British heritage, underlying design principles and status as a car for all social classes forge a link between the current models and the classic Mini. The fresh interpretation of classic design elements accurately showcases their shared qualities.

The development of the classic Mini saw a rigorous commitment to the efficient use of space and the innovative arrangement of the drive components spawn a small car concept that was revolutionary at the time and is still regarded as pioneering today. Its practical and economic virtues, host of clever details and, more than anything, its agile handling earned the compact four-seater legendary status not only in its native Britain, but around the world.

For the relaunch of the brand the designers took the most important features of the original Mini design and tweaked them for the new MINI to meet the demands of personal mobility in the 21st century. Front-wheel drive, engines mounted transversely at the front, short body overhangs and a low centre of gravity have marked out the original member of the small car segment throughout its history. Sophisticated drive and chassis technology, uncompromising quality and individual style ensured the MINI was the first premium model in its class. And innovation rooted in tradition ensures the brand’s cars remain as unique today as they have always been. 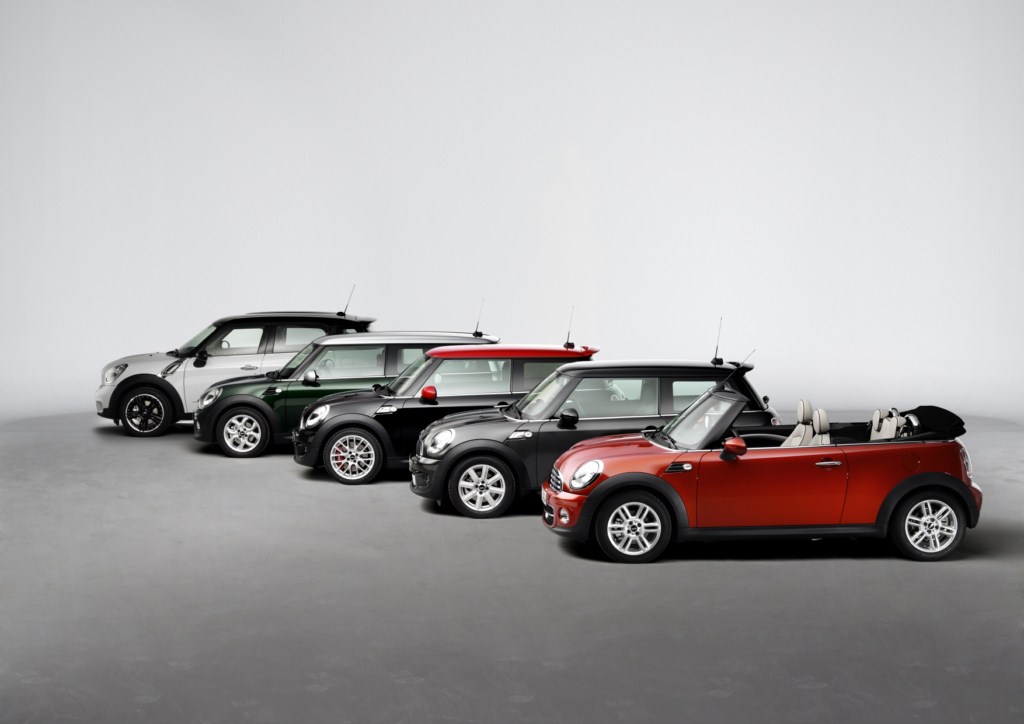 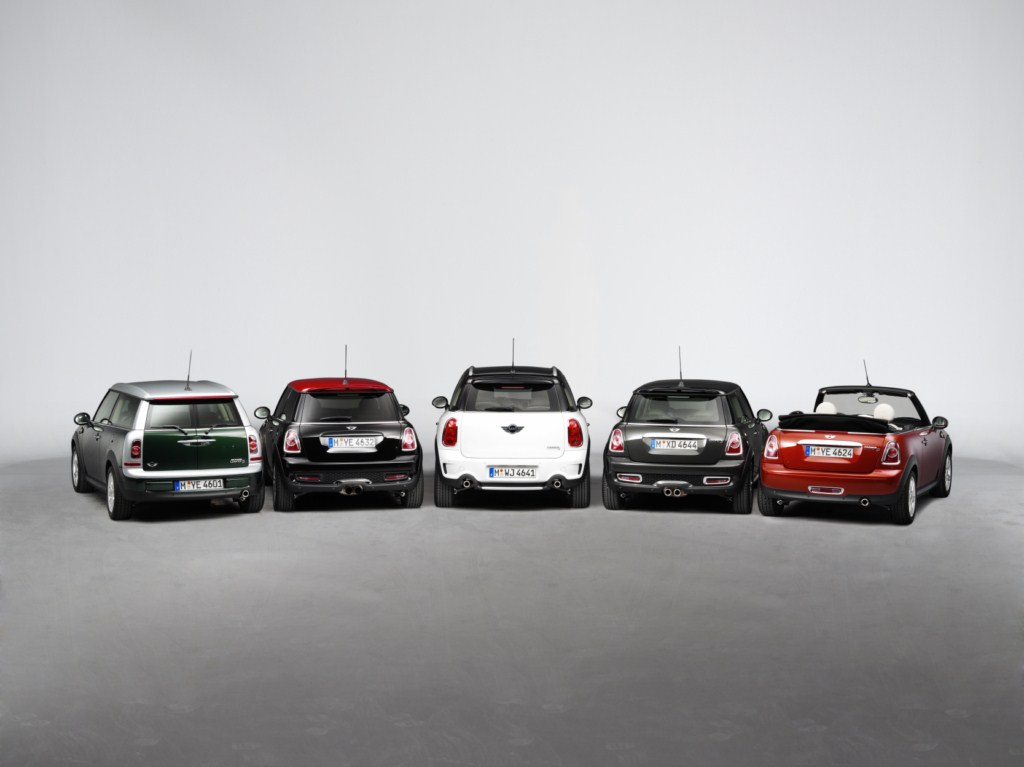 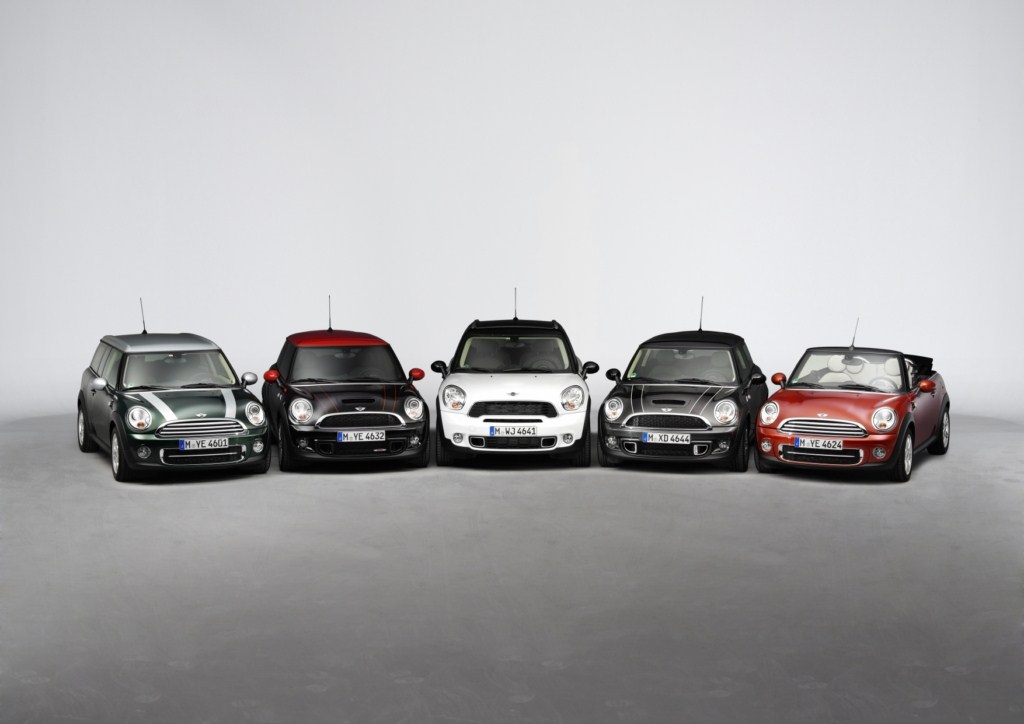 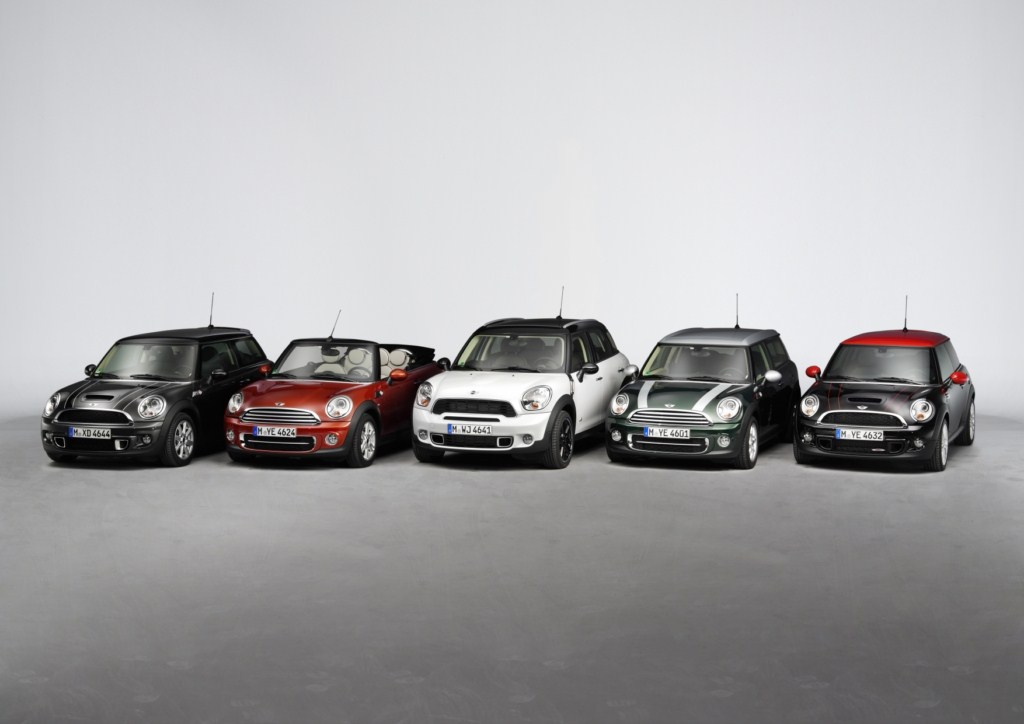 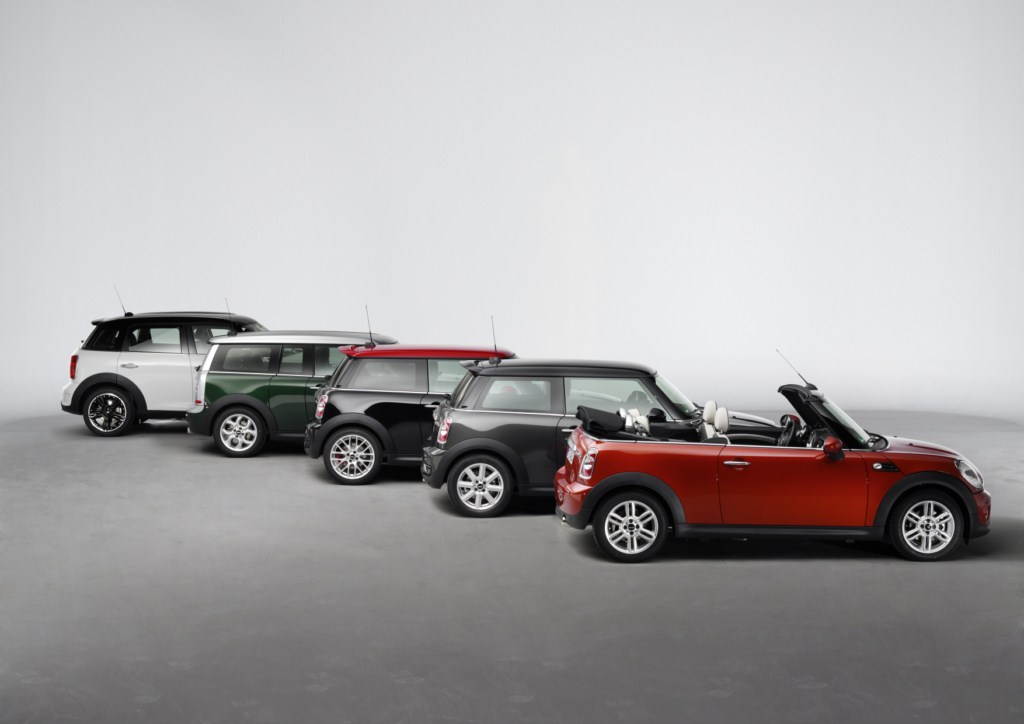