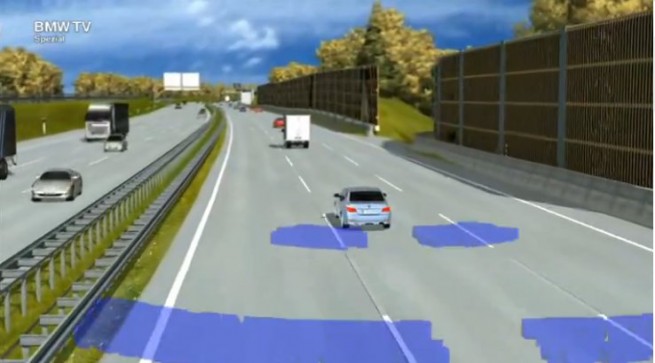 One of the optional equipment in the newer BMWs is the Lane Change Warning. This feature helps with external distractions or slight lack of attention and warns the driver if an accident is likely to occur due to a lane change.

This system monitors the area behind and next to the vehicle and warns the driver when a lane change would lead to a dangerous situation.

At the rear of the vehicle the Lane Change Warning uses radar sensors to inform the driver via a symbol on the wing mirror if there is a vehicle currently in their blind spot or if a vehicle is approaching quickly from the rear. As soon as the driver uses the indicator to change lanes, they are warned in potentially dangerous situations by a flashing LED signal and steering wheel vibrations.

The camera positioned at the front of the vehicle assists the Lane Departure Warning system. When travelling above 70 km/h the system monitors road markings and their position versus the car as well as the edge of the road or lane. The system is activated whenever the vehicle leaves its current lane unintentionally and alerts the driver by making the steering wheel vibrate. When the driver indicates their intention to change the lane by using the indicator, there is no warning signal.

The system is currently available for the new 5 Series variants Sedan, Touring and GT models, as well as the 7 Series. Most likely the new generation of BMW 1 Series and BMW 3 Series will also offer the optional lane-changing warning. For BMW X5 and X6, the only option currently available is the Lane Departure Warning.

As the technology matures and potentially becomes more affordable, we expect to see it implemented across a wider range of BMW vehicles.