Las week we reported that a G-Power Hurricane RS model has broken the world speed record, but our information proved to be half right, or slightly more than half. G-Power has indeed set a new speed record, and the car was also a Hurricane, but the model in cause was RR and no the previously released RS.

A press release issued by the company gives us all the details.

Following up on the G-POWER M5 HURRICANE RS powered by a G-POWER twin-supercharger engine with 750 hp/551 kW, which has set the record for the ‘world’s fastest sedan’ at 367,4 km/h in early 2010, G-POWER did it again. But this time with 372 km/h! With this target in mind, the development for the new evolutionary HURRICANE RR with 800 hp began. 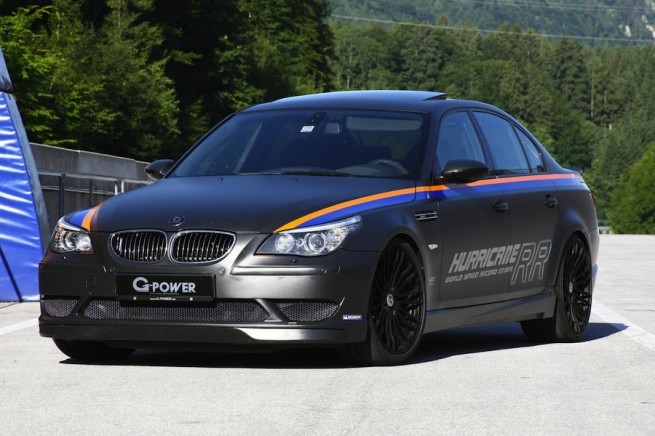 few weeks ago, the air is tight with tension when the G-POWER engineers give their “go” for the M5 HURRICANE RR to manage the ultimate test: High Speed. It takes only a few minutes to change the standard 20 inch G-POWER forged wheels to 19 inch ones. The wheels, especially fitted with Michelin Pilot Sport tires that Michelin are certified for top speeds of more than 370 km/h. The HURRICANE RR is ready to go, the test track as well. Apart from the swop of the wheels the HURRICANE RR is completely standard and relies predominantly on its power of the bi-supercharger engine. And just a few laps later it is done. The analysis of the engineers states a top speed of 372,1 km/h. World record! Once again… 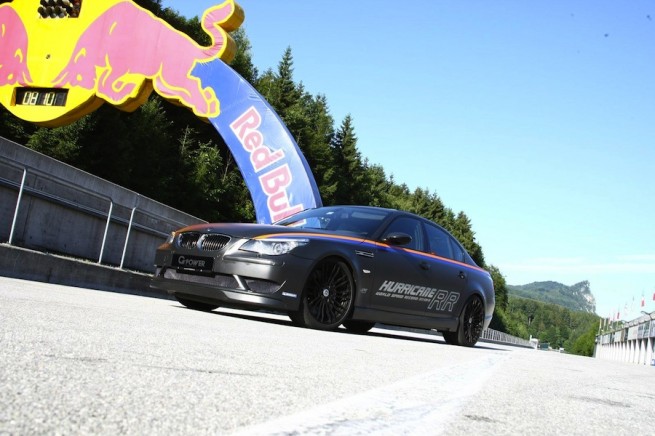 To achieve this extreme performance, the twin supercharger system of the high-revving V10 has been redesigned. The two superchargers named ASA T1-313 have been replaced by larger ASA T1-316 units. They are both driven by a belt and do provide each cylinder bank with supercharged air. This means more space for the supercharged air by up to 25 percent. The air volume being transported by these modified superchargers is able to generate a theoretical power output of more than 900 hp.

The pre-compressed air from the superchargers is cooled for a maximum power output. A complicated aluminium casting – painted in G-POWER orange – replaces the standard air box on top of the engine, and its direct inlet is responsible for the spontaneous response characteristics which give the G-POWER motor its incomparable response and also much more torque. 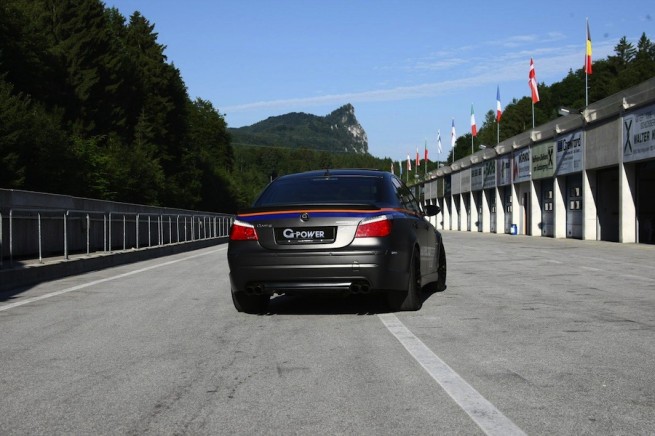 The inner workings of the 10-cylinder, four-valve engine are optimised by light, precisely balanced MAHLE high-performance forged pistons with lower compression and increased mechanical strength. As the standard connecting rods and piston pins were equally not up to the considerably increased forces, here too, recourse was had to special parts.

But the G-POWER HURRICANE RR does not only set new performance standards for top speed. With an acceleration of just 4.35 seconds from nought to 100 km/h, 9.5 seconds up to 200 km/h and 25,8 seconds up to 300 km/h the two-ton sedan is also leading his class.

The G-POWER technology is available for all current M5 and M6 models. The G-POWER SK III bi-supercharger engine conversion with 750 hp / 551 kW starts at 56,000 Euros (net). 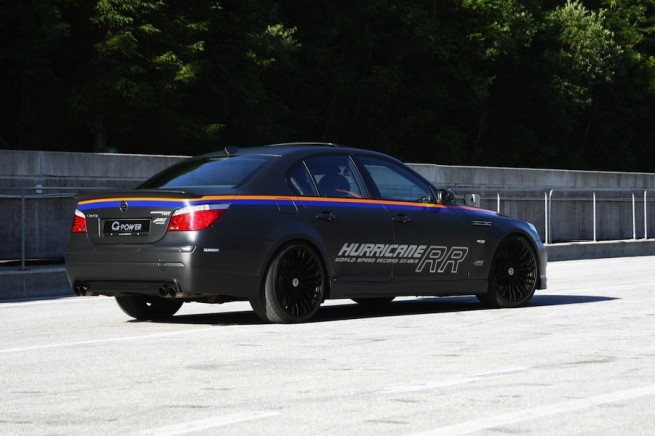 In addition to the most powerful BMW engine ever being fitted to a street-legal BMW M5 a new aerodynamic for maximum efficiency was key. The HURRICANE RR is equipped with the G-POWER “HIGHLINE” body kit. In addition to provide the necessary downforce the body kit is also designed to provide significant more air flow to cool the engine. The body kit consists of front and rear skirts and spoilers, doors render and the rear spoiler.

Two tons of weight and a top speed of 372.1 km/h naturally require extreme demands on the tires, being fitted on special G-POWER forged wheels. Our technology partner Michelin provided high-performance Pilot Sport tires in the dimensions 255/35 ZR 19 at the front axle and 305/30 ZR 19 at the rear axle for this reason. For every day use the G-POWER HURRICANE RR runs on 20-inch Silverstone CLUBSPORT wheels with the dimensions 245/35 ZR 20 and 285/30 ZR 20 front and rear. 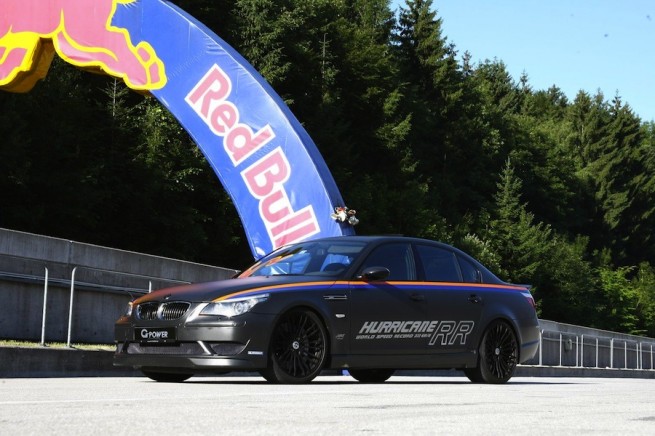 Even more contributions to the HURRICANE RR’s high-speed talents are coming from a G-POWER high-performance brake system and the height-adjustable G-POWER RS coilover suspension that is adjustable for both compression and rebound in nine settings.

The interior of the record car features a tachometer reading up to 400 km/h, clear-coated carbon-fiber panels for the dashboard, center console and door panels. An ergonomically shaped G-POWER sports steering wheel with especially perforated Kjerba Nappa leather is completing this package.

The G-POWER HURRICANE RR can be ordered as a complete car, only. Any current M5 model – sedan or station wagon – can also be equipped with the individual G-POWER components of the world record holder.