Andy Priaulx (GB) and Colin Turkington (GB) scored BMW’s second one-two in the 2010 FIA World Touring Car Championship in Brands Hatch (GB). In the 12th round of the season, Priaulx crossed the line after 16 laps 0.399 seconds ahead of BMW privateer Turkington of Team ebay Motors, claiming his fourth victory of the season. It was the triple world champion’s 16th career win in WTCC. No other driver has scored more wins than Priaulx. His fellow BMW Team RBM driver, Augusto Farfus (BR), dropped back to 13th following a collision with Chevrolet’s Alain Menu (CH), but managed to improve back to eighth over the course of the race.

Priaulx secured eighth in race one – and pole-position for the second race – following a stunning fight back from 16th on the grid. Farfus collected eight points by finishing sixth. With Chevrolet’s Yvan Muller (FR) taking victory, Turkington came third in his BMW 320si WTCC, making it to the podium and being the best-placed BMW driver in the 11th round of the year. 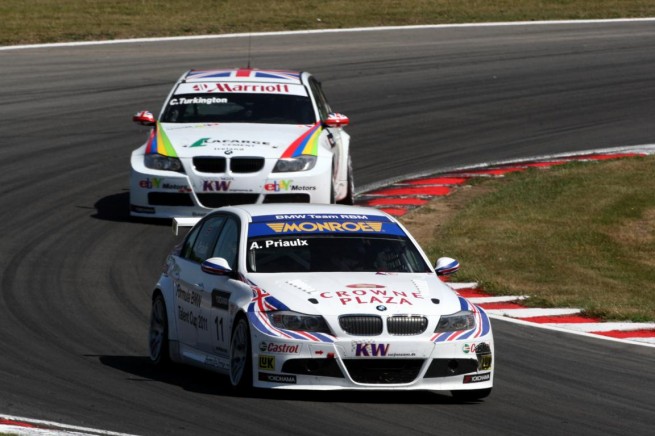 In the Drivers’ Championship, Priaulx remains in touch with the front-runners. Following his victory on home turf, he is third with 146 points. His gap to championship leader Muller is 53 points. Farfus is eighth, now with 87 points.

Bart Mampaey (Team Principal):
“Considering the grid positions, our race one result was excellent. It put us in a promising position for the second round. However, the race then took an unlucky turn for Augusto. He managed to take the lead after making a better start than Andy. When Andy passed his team-mate, Alain Menu also tried to push his way past, and he collided with Augusto. This was massively unfortunate. Afterwards Andy was in full control of the race at the front, celebrated his fourth victory of the season and collected a lot of valuable points.”

Andy Priaulx (Car Number 11):
Race 1: 8th, 1:34.078 min – Race 2: 1st, 1:34.791 min – Car weight: 1,198 kg
“It was a tough weekend. Going back ten places on the grid was not ideal. I am really chuffed to have this result now. It’s my fourth win of the year – and I am pleased I could score it at home. We are going into several races now that are going to be more favourable for us. I think it is going to be tough to beat these guys this year. We are challengers, but we are ambitious challengers and hopefully we can take the fight to Macau.”

Augusto Farfus (Car Number 10):
Race 1: 6th, 1:34.273 min – Race 2: 8th, 1:35.361 min – Car weight: 1,198 kg
“In the first race everything went perfectly well. My start was good, the performance was there and without the safety-car phase I could have even made it further up the field. I was also able to push hard in race two, and the start was great again. When Andy tried to pass me, I didn’t want to risk too much. Unfortunately Alain Menu also tried to squeeze through and our cars collided. Even after this incident my car was running well. But eighth place was all I could achieve after dropping back.”

Colin Turkington (Car Number 29):
Race 1: 3rd, 1:34.108 min – Race 2: 2nd, 1:34.903 min – Car weight: 1,123 kg
“These two races were just fantastic for me – and the result is just perfect for our team. When we last competed in the WTCC rounds in Brands Hatch, we were also on the podium twice. Today we were quick from the very first lap. I managed to keep my concentration high and made no mistakes. We were rewarded with two podium finishes.”