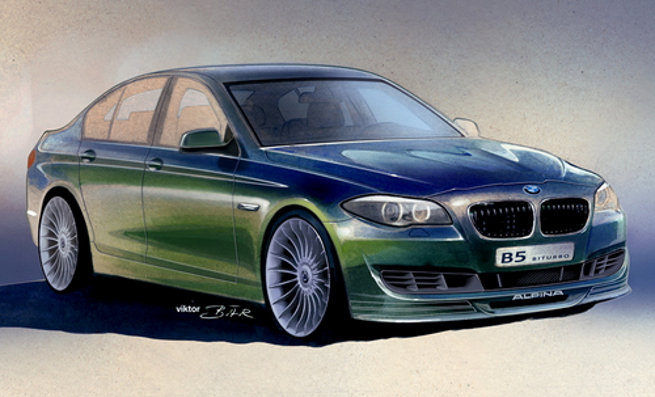 ALPINA releases an official teaser photo of their upcoming B5 BiTurbo model based on the new generation F10 5 Series. Spyshots of the BMW Alpina B5 BiTurbo started to show up last year when the Buchloe-based automaker initiated their F10 B5 project.

The new ALPINA B5 will be unveiled next month at the Goodwood Festival of Speed.

Under the hood it is likely to see a variant of the current V8 engine from BMW, which is also used in the ALPINA B7. The engine found in the B7 carries the internal designation N63 and has its power output set to 507 horsepower. The maximum torque is likely to be at least 700 Nm.

Similarly as before, the ALPINA B5 represents an alternative to the BMW M5, with the B5 placing more emphasis on comfort, exclusivity and luxury. The factor of sportsmanship is not being ignored.

The B5 will continue to differentiate itself from the M5 with its traditional branded elements, such as the oval four tailpipes or the larger air vents incorporated into the bumper.

New BMW ALPINA B5 Bi-Turbo to be unveiled at the Goodwood Festival Of Speed!

Spanning over six generations, ALPINA has continuously produced highly successful automobiles based on the BMW 5 Series.

A blend of luxurious performance, elegant styling, sporty handling and exclusivity, have afforded each generation a dedicated following.

The new BMW ALPINA B5 Bi-Turbo smartly packages these qualities into a fresh, modern and dynamic design, creating a new high performance saloon with best-in-class economy.

What better way to catch a first glimpse of the new B5 Bi-Turbo than during the 2010 Goodwood Festival Of Speed, where ALPINA will unveil the car for the very first time. See the car close-up in the Supercar Paddock, visit the ALPINA stand or be one of the very first to test drive (by appointment only)!

We look forward to seeing you at the Goodwood Moving Motor Show and Festival Of Speed! (01-04 July 2010)