Update: A source close to the company mentions that the 1 Series and 3 Series will continue down the path of rear-wheel drive platforms and at this moment, it is unclear what naming convention will any future front-wheel drive models carry. Any news around a 1 Series FWD are speculative at the moment.

Next year, BMW will unveil their new generation 1 Series. Built under the codename F20, the 2012 BMW 1 Series will first launch in a hatchback variant. The new BMW 1 Series hatchback model will feature a slightly longer wheelbase and wider track than the current model.

It will be available in three and five door variants with both models using the new modular/expendable platform. The backbone of these models was designed especially for this purpose so every model can have a variation backbone, simply be moving suspension points and firewalls to areas that will benefit each vehicle. Corroborated with more parts sharing, this new approach will allow BMW to reduce even more the production costs.

The three and five-door hatch will only be available in Europe, but coupe and convertible variants will make their way onto the U.S. soil.

Starting in 2013, BMW will add two more 1 Series variants to their line-up, and rumors around a front-wheel drive, and even xDrive, continue to surface monthly. To generate enough volume, BMW will link its FWD/AWD newcomers to the third-edition MINI, which happens to debut almost simultaneously. 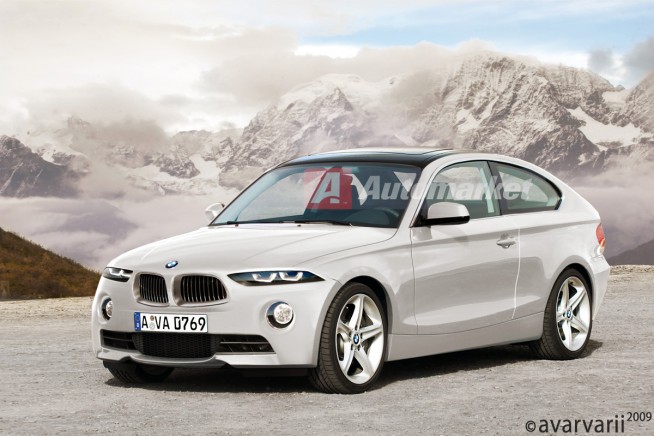 The following year, BMW plants to introduce a Gran Turismo version of the new 1 Series. Dubbed 1 Series GT, the new model will be a 5-door vehicle, a mix between a hatch, wagon and sedan. 1 GT will be 2 inches (5cm) longer than the 3-door and 5-door models, but it will sport an unique front-end. To reflect the Gran Turismo design, the 1 GT will have an elevated driving position, as seen in the 5 Gran Turismo. Inside, the 1 Series GT should provide an alternative between two individual rear seats separated by a central console or the classic rear seats setup.

Its fastback body follows the tone set by the 5-series Gran Turismo and upcoming 3-series GT due in 2013.

Starting in 2013, however, BMW will add two more 1-series variants, this time with a choice of front- or all-wheel drive, thereby following a recipe chosen by Audi for the A3 and by Mercedes for the next A-/B-class. For enhanced synergy effects, even the body styles offered by the two brands are closely related. There’s a , and a fastback BMW that shares its vehicle structure with next Mini Clubman.

But an interesting report comes today from the fellows over at Automobile Magazine. Along with the above renderings, Automobile Magazine launches an hypothesis of even more 1 Series variants. One of them, a high-roof 1-series model, for instance, that relates to the upcoming MiniVan, and it is being referred to as the Compact Activity Tourer (CAT).

“That more pragmatic role will be played by the – relatively – higher-roofed Compact Activity Tourer (CAT). Although CAT is in fact a broad-shouldered low-slung mid-size minivan not unlike the new Opel Meriva, nobody inside BMW calls it that. Instead, SportsCruiser is a possible designation; Family Activity Vehicle (FAV) is another. Like the MiniVan, CAT has four conventionally hinged doors, a flexible seating arrangement, and an extended rear overhang for extra luggage space.”, mentions Automobile Magazine.

Even further, apparently the entire project is still masterminded by BMW, not MINI. The modular matrix is sure to use an independent suspension front and rear, variable-ratio electro-hydraulic steering, a low-friction lightweight version of xDrive (not the Countryman AWD hardware) and a mix of three- and four-cylinder engines.

Our sources indicate that new three and four turbo engines will be used across the 1 Series models, from a 1.3 liter engine with 136 horsepower to a new 1.3-liter turbo powerplant developing 177 horsepower. The gasoline version, dubbed N30, comes in displacements of 1.2 and 1.5 liters with power output of ranging from 70 to 184 horsepower.

At the high-end of the line-up, the 135i will be using the N55 Twin-Scroll engine.

In the diesel segment, a new three-cylinder 1.5 liter N37 engine will have a power output ranging from 110 to 125 horsepower.

The threes-cylinder engines will use about 10 percent less fuel.

A new BMW 1 Series Hatchback Concept is rumored to be unveiled at the Frankfurt Motor Show in September 2011.