Our friends over at IND-Distribution have another project to share with us.
——
Humanity has been obsessed with time since the dawn of history. The Egyptians, the Mayans, the Greeks, and thousands of other civilizations throughout human history have strived to measure and understand time. No mineral, artifact, or human creation, nothing is more precious than time. Time does not negotiate; it cannot be purchased, sold, or recovered once it’s lost.

Mankind has accomplished impressive feats, but as each man lives his life, he does so under the looming shadow of passing time. No force is more fearsome than the passing of time itself. IND’s latest portfolio project makes this fact abundantly clear. This project was not a battle against limited resources, limited creativity, or limited ability, but rather a fight against time.

Nelson, our client for this Portfolio Project is an unsung hero in the car world. His collection of supercars has given magazine editors across the world the opportunity to test drive some of the rarest, most exotic vehicles on the planet, and has allowed regular car enthusiasts like us to read about machines we can only dream of having. His garage looks like every teen aged boy’s fantasy, with everything from Aston to Zonda contained within.

Nelson has been a BMW owner since the 1970s, and has had a passion for the M division’s unique creations since the letter M began to quicken the heartbeats of performance enthusiasts worldwide, so was naturally felt inspired when he saw IND’s Atlantis E90 M3 portfolio project. The color was so striking to our client, that he knew he had to have it. The color itself comes with a price, however- a brand new M3, ordered through BMW’s Individual program can take nearly a year to obtain. As plans came together, our mission became very clear.

IND would create a car that would look at home next to Nelson’s two Bugatti Veyrons and Ferarri Enzo both because of its amazing performance and its exotic spec sheet. We also knew that Nelson wished to have the car in time for the summer’s track season, and could not think of a better venue to show the completed car to our client than BimmerFest in California- without question the biggest BMW gathering in the US. It is when we committed to these two simply-stated goals that the specter of time began to loom over IND. 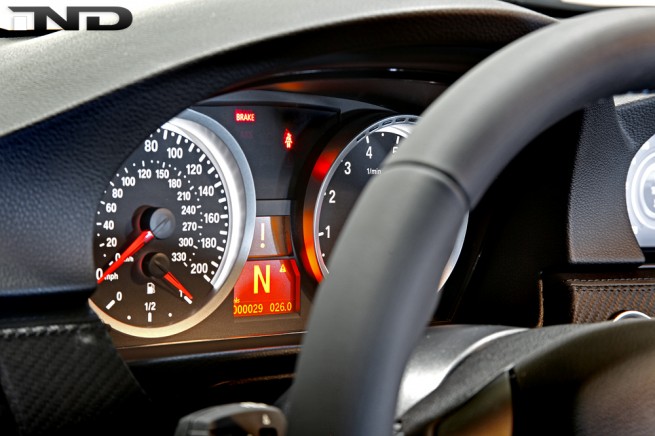 We had to build a car that could fight against Enzo Ferarri’s personal legacy to capture Nelson’s attention, and we only had two months to envision and build such a machine.

The project started with the purchase of a brand new 2010 E92 M3. It had been a while since I had the chance to sit in an M3 this new, and the experience was no less intoxicating than the first time I’d gotten the opportunity. The car pulled into our shop with 29 miles brightly displayed on the odometer. The window stickers, floor mat protectors, and of course that wonderful smell of a new BMW were all there, and I could not conceal my excitement. Of course, after some moments of simply staring at the car, I began to regain focus. All of IND’s staff would have to talk and plan and debate for hours. Choices had to be made quickly, and correctly. Parts that many said were impossible to get would have to arrive within days of the car’s arrival at our facility. And of course, there was the matter of disassembling the entire car to prepare it for its complete refinish in BMW’s beautiful Atlantis Metallic. 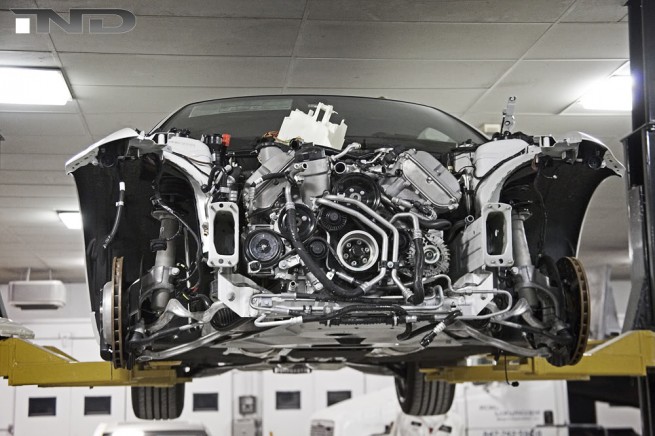 To that end, while IND’s creative staff met to discuss our vision and create a build timeline for the car, IND’s BMW factory trained technicians immediately moved the car to our lift to begin disassembling the entire car. The complete front of the car was removed in this photo, to prepare the engine for removal. 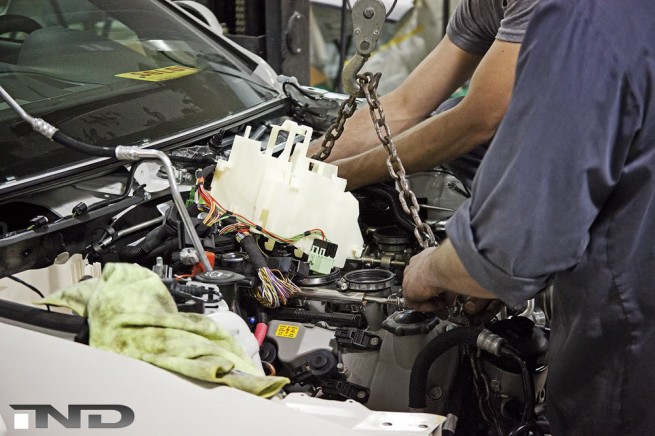 The engine was stripped, and prepared for removal… 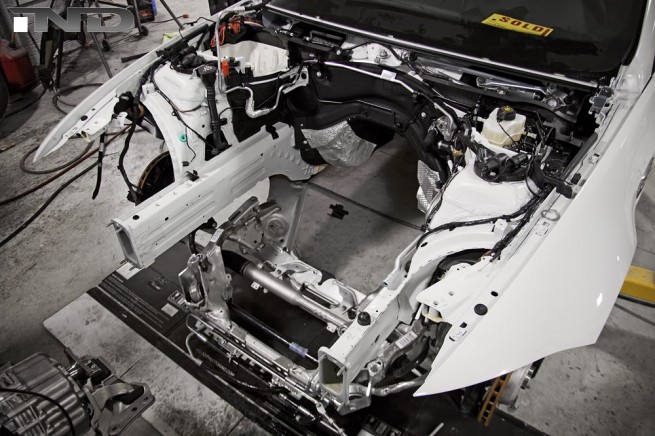 … and then removed to expose the muscular looking frame of the M3. 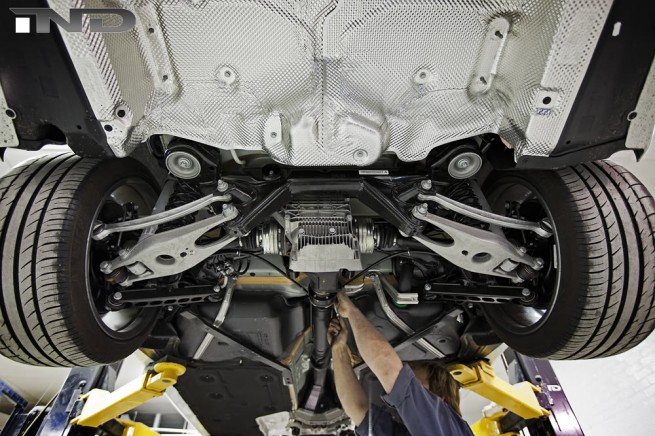 The M3’s complete drivetrain was then removed, along with any trim, underbody protection, and fuel, brake, and emergency brake lines under the car. 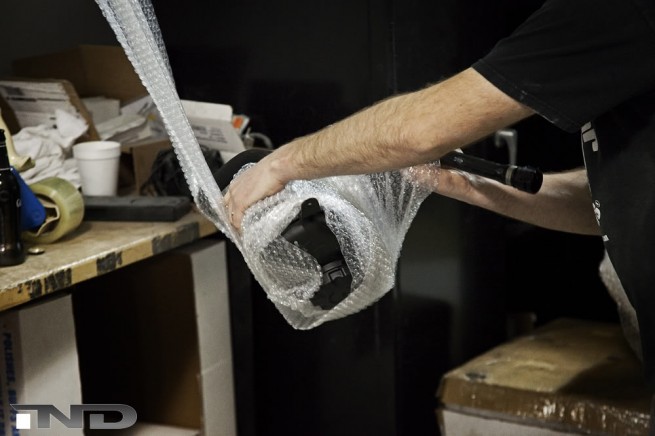 Each part was meticulously packaged and labeled immediately after removal. A dedicated section of industrial sized warehouse shelving was purchased specifically for Nelson’s M3, and installed in a separate section of our warehouse to store all of the parts. One of the biggest challenges of building this M3 is the reassembly process- our technicians are doing the job that BMW does on an assembly line with complex machinery, entirely by hand. Each piece must be absolutely perfectly re-installed to ensure that the car has no strange creaks, rattles, or groans and feels and drives just like a car with 20 miles on it, fresh from BMW’s assembly line.

We chose our most qualified paint professional to complete the paint work on this car. He has been with our shop for 28 years, and lit up with excitement when we began discussing the magnitude of this project together. The beautiful Atlantis Metallic paint was applied to the freshly prepared car only two days after the car’s arrival at our shop. Every member of IND’s staff was aware of just how little time was available, and with time looming over our shoulders, not a single staff member wasted even a precious second between tasks.

As soon as the paint cured, our technicians began reassembly of the critical components so that the car could be sent to our composites manufacturer, our upholsterer, and to BMW. 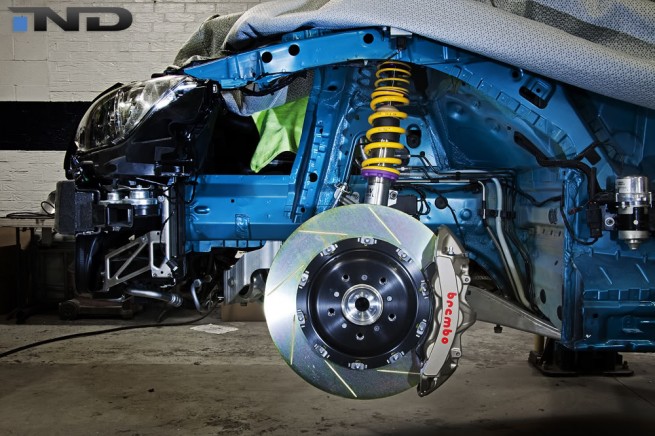 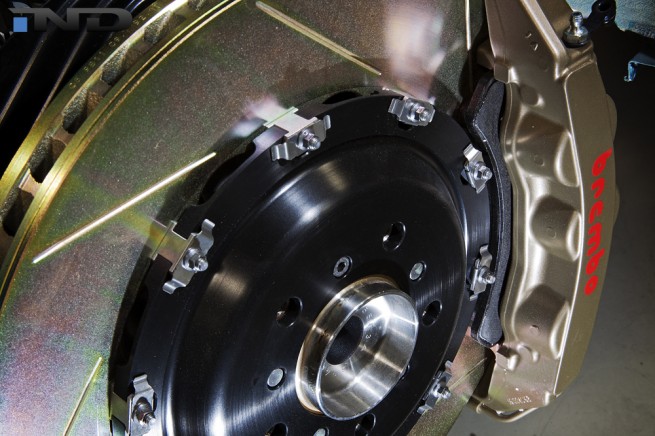 Because every nut and bolt was removed from the car, even small items like the horns, oil cooler brackets, and so on had to be reinstalled, along the with the natural centerpiece of the car’s wheel wells- the KW ClubSport adjustable suspension and Brembo 380mm brake kit, finished in IND’s custom machinery grey to resemble Brembo’s Motorsport calipers. 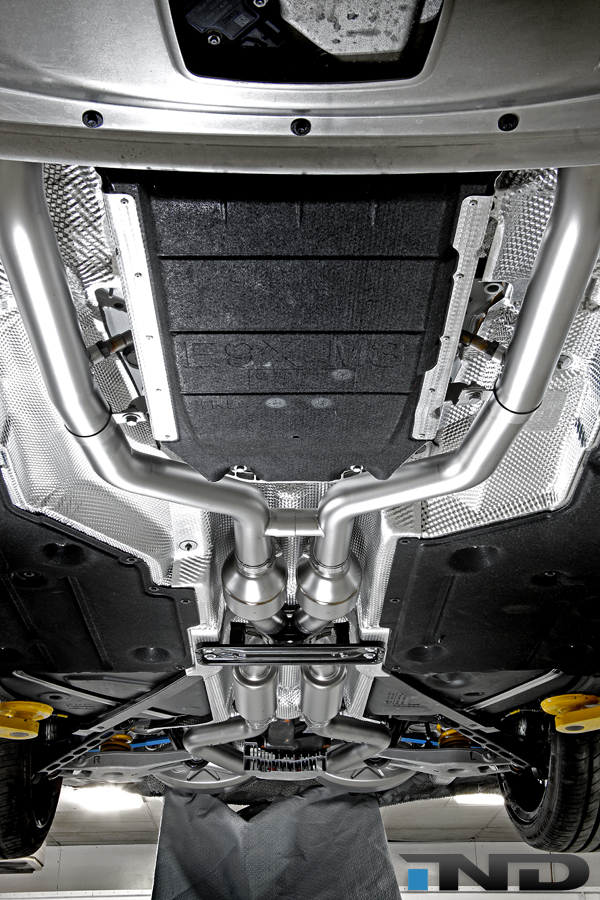 Akrapovic’s titanium exhaust system was a perfect match for this project, and was next to be reinstalled on the car. Rogue Engineering adjustable toe arms can also be seen in this photo, and at this point the car’s floor plates and other small hardware are reinstalled. 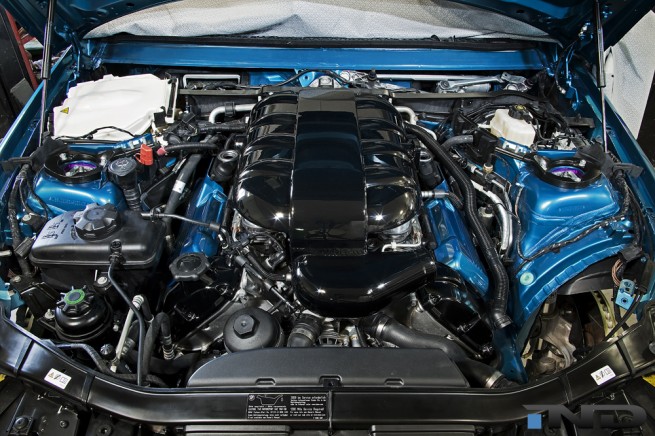 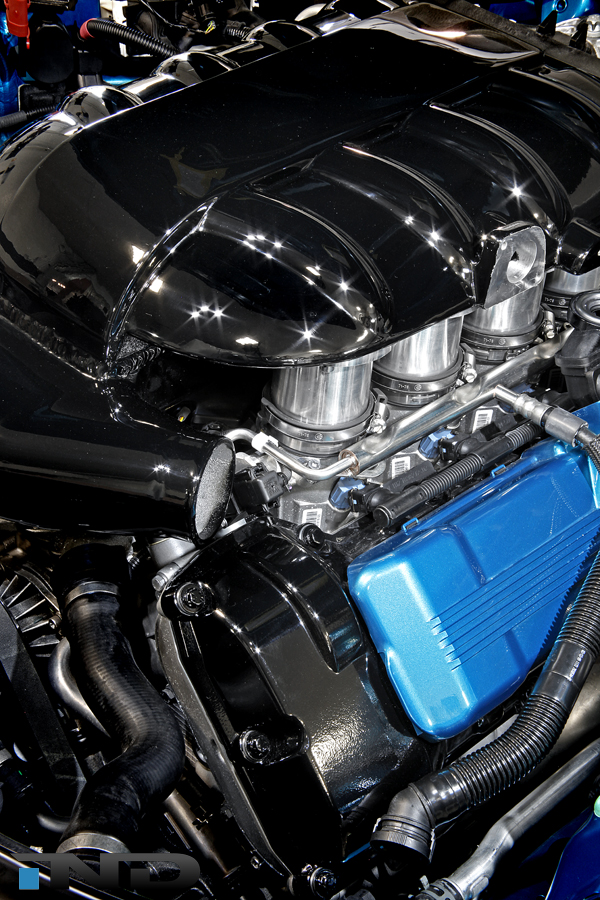 A car meant to compete for attention with Nelson’s supercars would not succeed in its task with only the M3’s standard power level on tap. ESS Tuning’s supercharger kit was perfectly suited to the task, offering bulletproof reliability and power levels usually reserved for exotics. IND could not leave the engine bay well enough alone, of course, so we chose to finish the valve covers in a high gloss black, with their plastic covers in Atlantis Metallic, and the supercharger’s intake manifold in a jewel-like high polished gloss black to match the theme of the car. 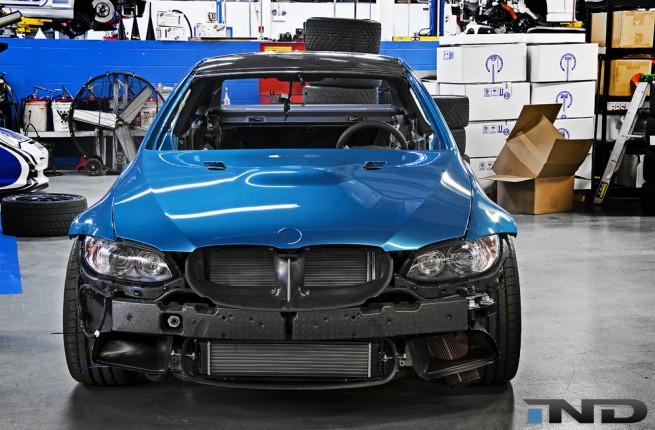 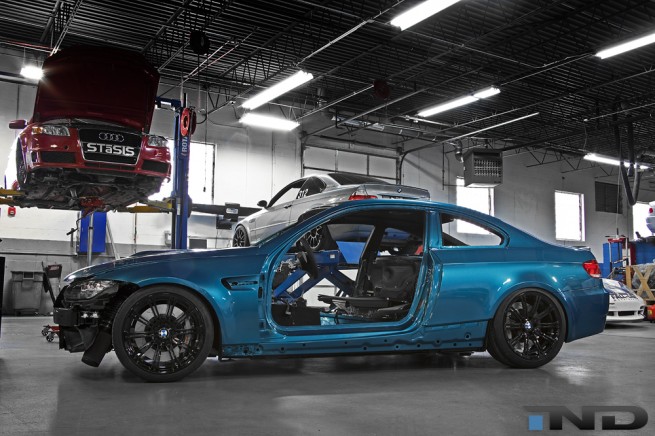 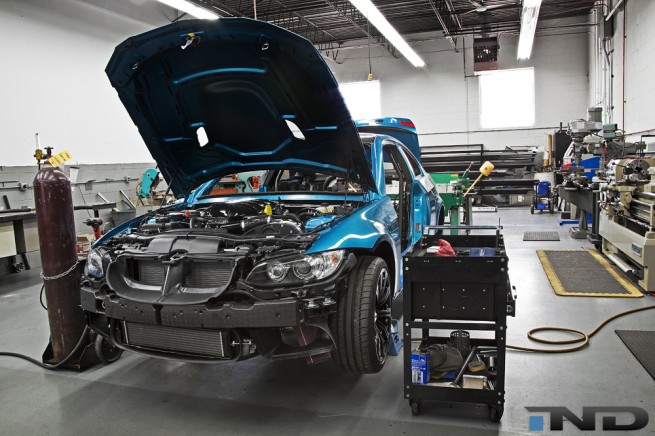 From here, the car made a trip to visit our friends at Fall Line Motorsports. To complete the car’s interior, we knew we had to borrow an element from the M3 GTS- the roll bar. IND worked with the expert fabricators at Fall Line Motorsports to create a custom roll bar for the car, using 1.75″ .095 wall thickness chromoly tubing. FallLine used their experience in racing E92 M3s in the Grand AM race series to weld in this beautiful piece of safety equipment. 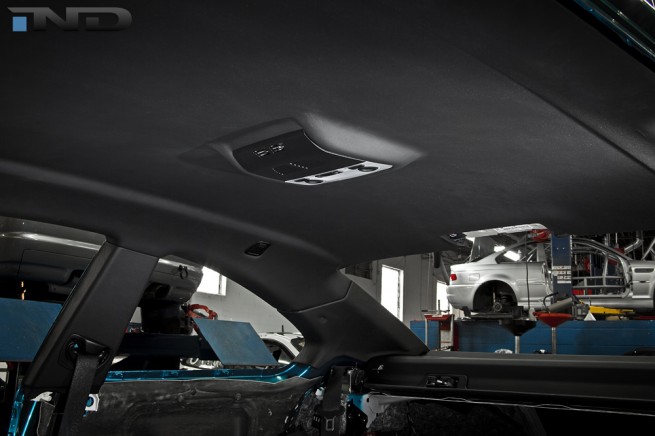 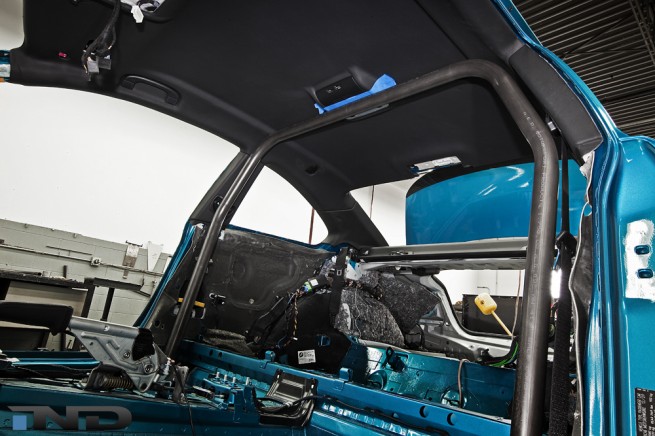 A photo of the roll bar’s main hoop being test fitted reveals another custom detail of this project- the all leather headliner! The fabricators at Fall Line had to work very carefully to not damage the beautiful leather of the headliner- IND had to purchase this leather directly from BMW’s leather supplier in Germany, and import the hides into the US as they are a blocked item in the United States! This gives the headliner, along with some other interior pieces we will reveal later a nearly irreplaceable status. 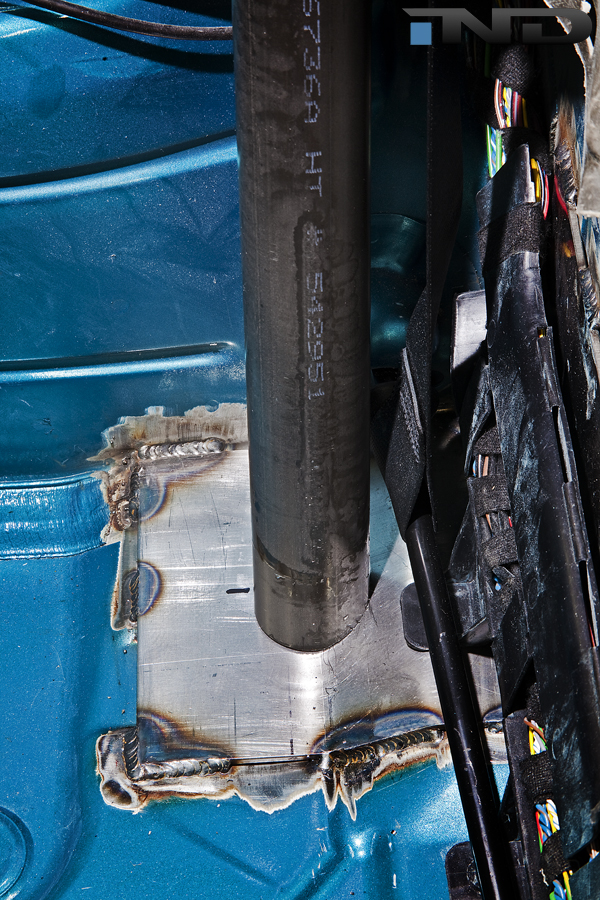 Fall Line’s master fabricators placed beautiful welds on the base plates of the roll bar.

As the project nears completion, all of us at IND must make the final push to build easily one of our most pride-worthy creations. I can’t reveal many more details at this point, but the car will be available for viewing at BimmerFest for BMW enthusiasts from the west coast, and once again at the Pebble Beach show for enthusiasts from the east.

Here is a preview of some of the other components being installed on the car, to make the project truly special: 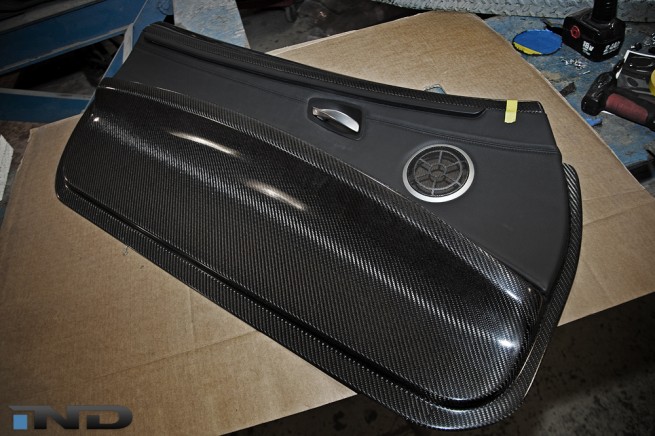 Ericsson was contacted to build a one-off set of Carbon Fiber door panels. These beautifully sculpted pieces will be part of a complete interior treatment.

IND imported BMW Performance seats from Germany, and are working with a true expert in the art of BMW programming to allow the M3 to communicate with the seats with no custom wiring or modification of the car’s safety equipment. We also have a special treat planned for the appearance of the seats. 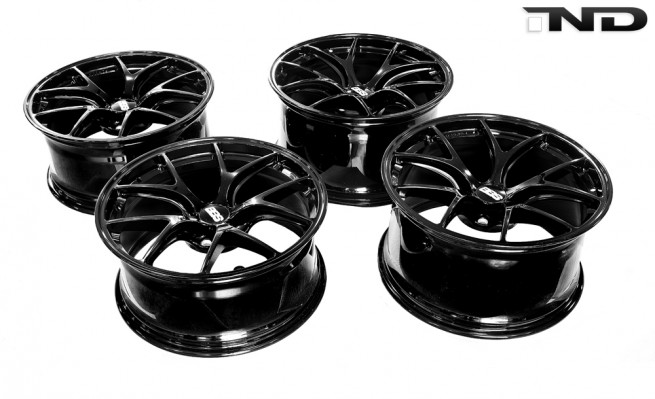 No other wheel will have suited this project more perfectly than BBS’ FI. The wheels were completely unavailable during the planning of this project, and to my knowledge, this is still the only set of BBS FI wheels in the United States as of today. The volcanic eruption of April made importing these wheels an even greater adventure, forcing IND to have our shipping contact in Germany personally pick the wheels up at BBS’ facility, drive them to the airport, and personally ensure the set got loaded on an airline flight. Seeing the wheels safely in our hands was truly thrilling! 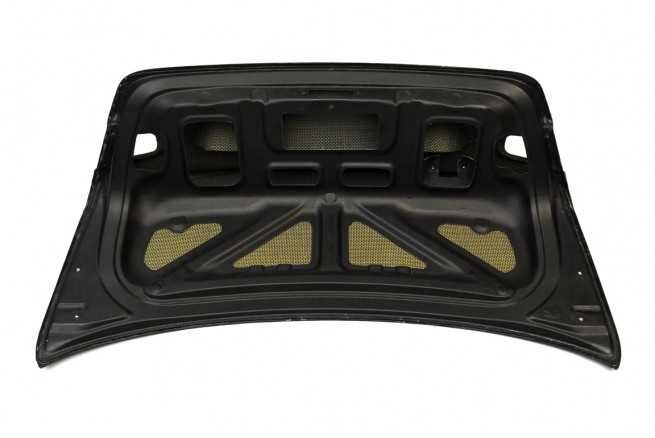 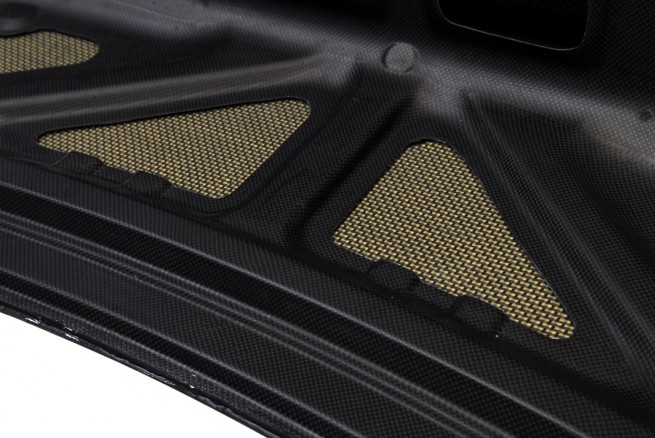 Challenge Engineering was contacted to produce a completely custom Carbon Kevlar trunk lid for the car. This is a truly unique piece, as it does not use any extra spoiler, and does not change BMW’s original lines. This piece was custom built for the project in literally a matter of weeks.

I have to end here, so readers will have to be patient until the car’s premier at BimmerFest. I assure all of you, the end result is well worth your time. See this car for yourself at BimmerFest in California, and at Pebble Beach in Florida!