More dynamic, efficient, and luxurious than ever, the new BMW X5 continues to strengthen its leading position within the four-wheel drive, premium vehicle segment. The new BMW X5 has a fresh new look and features new engines, drive trains, and thousands of new parts.  The associates at BMW Manufacturing have been planning the launch of this new model for over 18 months, which involves nearly 4,000 new parts.

Since launching the original BMW X5 in 1999, this new model X5, the fourth generation, features a completely revised range of engines, standard eight-speed automatic transmission and innovative driver assistance systems that ensure the driving pleasure of the new X5 offers even greater fascination.  The production launch of this new model occurred as a digital changeover within Plant Spartanburg, meaning that production associates learned new vehicle processes alongside existing processes and parts were seamlessly transferred into the new model X5.  This changeover took place over a single weekend, with no ramp-down of the 2010 model on March 19 and no ramp-up of the 2011 model on March 22. 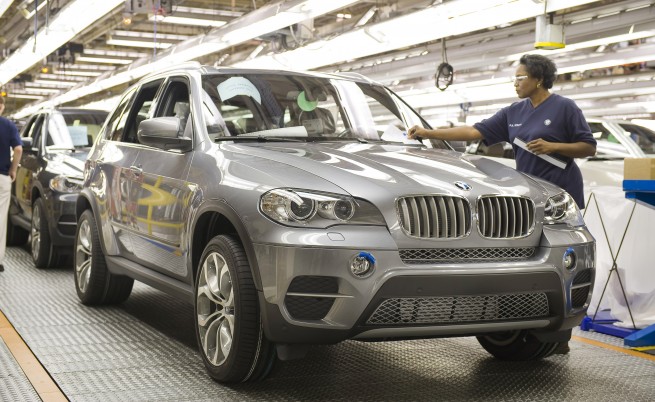 “One of the most significant changes for our plant was the introduction of a completely new range of gasoline and diesel engines. Almost every new X5 is equipped with an eight-speed automatic transmission as standard.  Further, each new drive train offers a new transfer case, new front and rear differentials, and new drive shafts,” states Craig Westbrook, BMW Manufacturing’s Project Manager for the New Model X5.

With the addition of BMW ConnectedDrive and new driver assistance systems, several new safety features come standard on the new BMW X5.  The Lane Departure Warning feature alerts the driver to unintentional drifting from the roadway by sending a vibration through the steering wheel.  Side View cameras integrated into the front of the car allow the driver to see traffic coming from the left or right.  Active Cruise Control with Stop & Go function ensures that the selected distance from the vehicle ahead is maintained; the system will slow the car down and even come to a complete stop – without the driver ever touching the brake pedal.