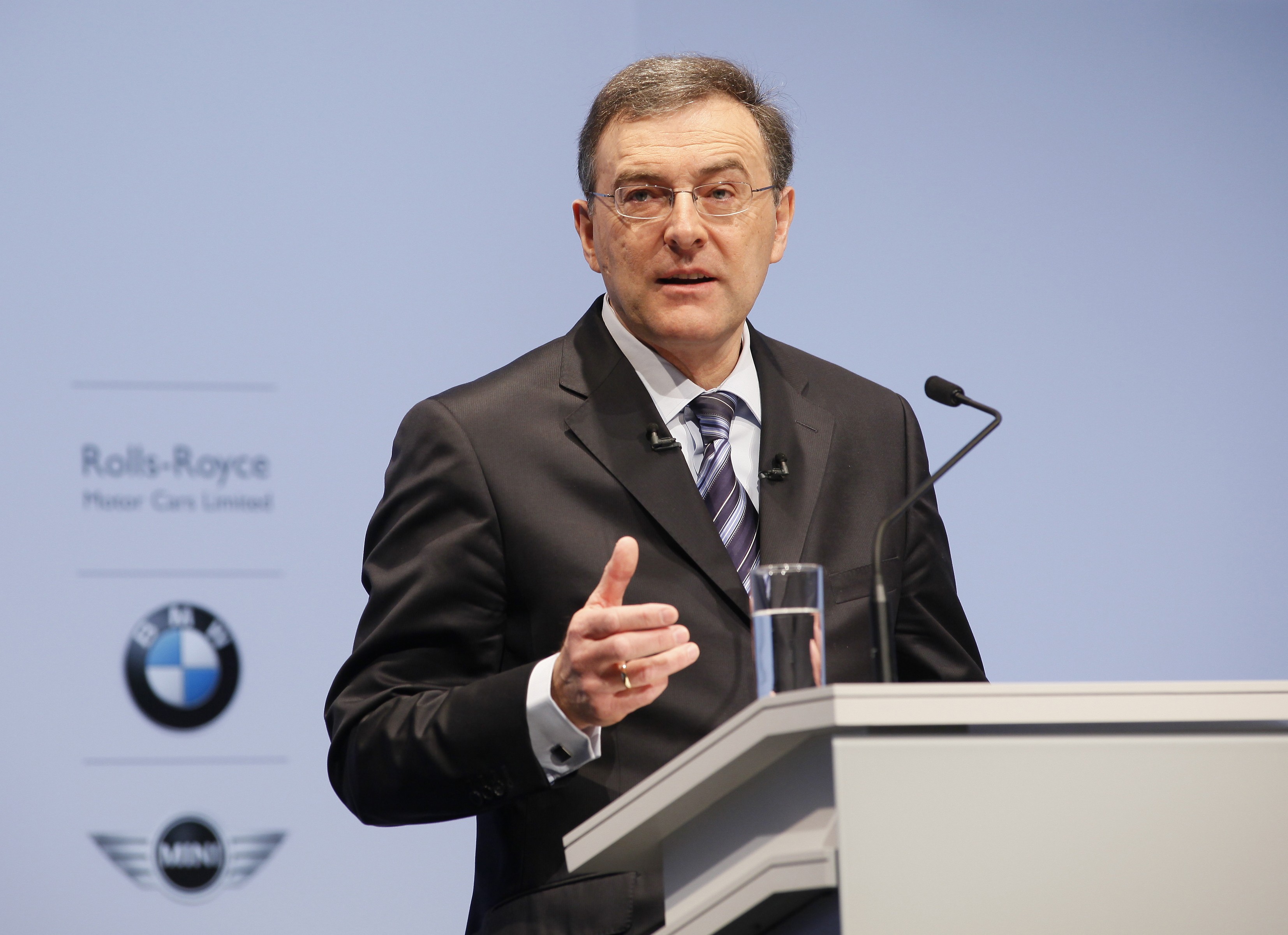 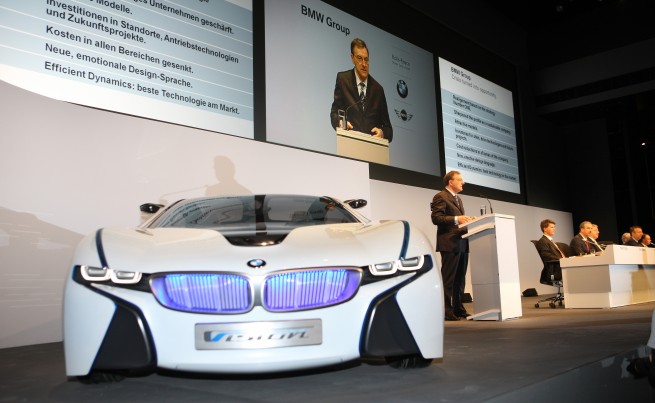 As you can see here: we are creating the future. And, we are on a path to profitable growth.

All these points demonstrate that we have approached the economic crisis as an opportunity and have capitalized on it.

In 2007, we set in motion our strategy Number ONE with a clear vision: In 2020, we will be the leading provider of premium products and premium services for individual mobility.

An important milestone in this effort is meeting our profitability targets for 2012. In the current business year 2010, we will take an important step in reaching this milestone:

2.)    Why is the BMW Group on the right track towards future growth?

When we met here last year I told you that 2009 would be a transition year with two priorities: crisis management in the short term, and investing in our future success in the long term.

Today our fixed costs are lower than in 2005. We also managed to cut material costs dramatically, thanks to our ability to increase scalability efficiencies in our processes. These changes have been implemented in collaboration with our suppliers and partners.

We have always made continuous quality improvement a priority. From our perspective, quality is a key aspect of our customer focus. As a premium car company, we constantly strive to improve standards.

Despite the economic crisis, we continued to invest in our future. First off, we invested in new technologies such as hybrid- and electric-motors as well as Efficient Dynamics, an area in which we managed to extend our lead further. We also have invested in our production plants:

We took the right actions to steer the company successfully through a challenging year. You are already familiar with the key data:

Our shareholders and investors have remained loyal to us despite the difficult and volatile situation and we believe shareholders should share in our company’s performance. The Board of Management and the Supervisory Board will propose a dividend for the same amount as 2008 at the Annual General Meeting.

The positive development of BMW ordinary shares, which were traded 47 percent higher at year-end than in the beginning of 2009, demonstrates the confidence the capital market has in the company’s future. In 2009, we have once again showed that BMW stock is a sound, long-term investment. 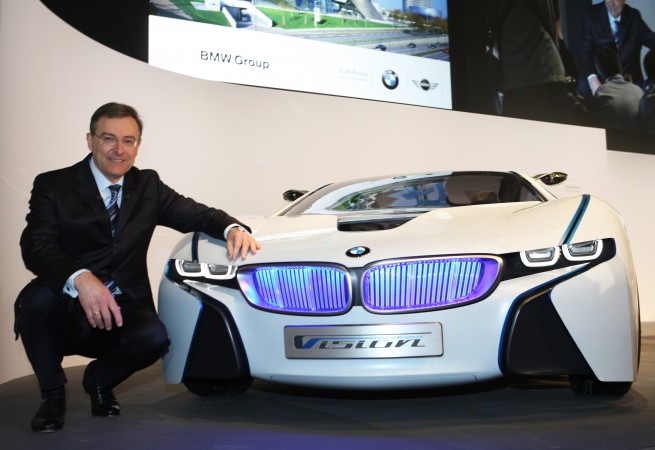 Moving onto the second topic:

Why is the BMW Group on the right track for future success?

We are really putting the pedal to the metal this year when it comes to new products. From October 2009 to December 2010, we will launch 17 new
or updated BMW, MINI and Rolls-Royce models:

The new BMW 5 Series Sedan is the start of a new era for the BMW Group.

The 5 Series is not only an image driver, but also a strong contributor to Group sales and revenue. It is with this new model that we were able to harness all the newly gained efficiencies in our production process and modular system.

The new 520d is a technological masterpiece: This car’s four-cylinder engine needs only 5 liters of diesel per 100 kilometers and emits only 132 grams CO2 per kilometer, while offering the typical BMW performance with 184 horse power – making the 520d the world’s most efficient luxury sedan.

Next year, the 5 Series will also be available as a full hybrid. Those who prefer not to wait can buy the first BMW hybrid models as early as April of this year, namely: the BMW ActiveHybrid X6 and the BMW ActiveHybrid 7 Series. They represent the state-of-the-art BMW ActiveHybrid technology. In the future, we will select the optimal hybrid solution for each model from a modular system.

Developing innovations is part of our DNA, and this is not going to change. Our innovative strength helps us tap new growth potential for the company. Again and again, we present our customers with new offerings.

MINI is not a miniature version of another model series. MINI is and will remain the Original – with a signature face, a unique tradition and over 1.5 million fans around the world.

In the future, we will generate growth both in the large model segments and in the compact and sub-compact model segments. We will launch more MINI and BMW models and variants – also in the small car segment. This segment is expected to grow further. And we will take advantage of this opportunity. We are exploring the possibility of developing a joint architecture for the front and four-wheel drive systems of these cars. In other words: There will be front-wheel drive BMWs in the smaller vehicle classes in the future. We all know that the cost structure in the small car segment is different from that of the larger model classes. We intend to grow profitably in this segment as well.

Because there is one element that applies to the entire process chain: We will increasingly apply modular manufacturing kits to various models and brands. This approach enables us to cut costs further – without compromising on top quality. 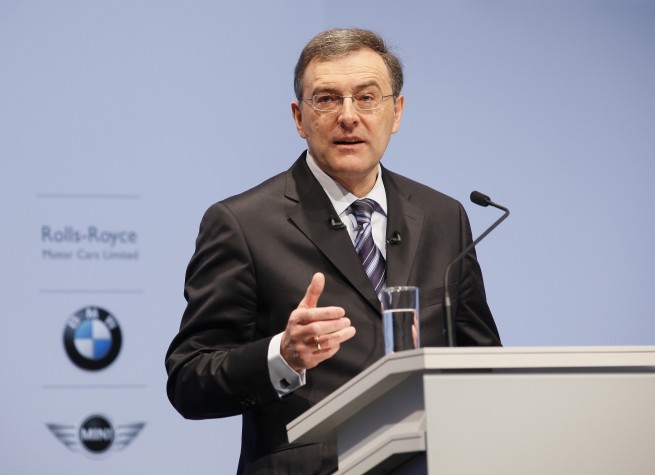 Premium is also defined through sustainability. As we see it, there are three components to this: an economic, an ecological, and a social factor.

Without financial success, we are not able to invest in eco-friendly technologies. Our products need to be profitable in order for us to create new technologies like e-mobility.

Customers are currently testing the MINI E for us. Some drivers have told me that they would love to keep their MINI E. Our annual report actually includes a section on customers and their experiences with the MINI E. BMW will follow suit in 2011 with a customer test fleet based on the concept study “BMW Concept ActiveE”. This test fleet will be built at the Leipzig plant.

Thanks to Efficient Dynamics, we have accomplished much more than our competitors. In other words: Efficient Dynamics represents Sheer Driving Pleasure 2.0.The average emission of our European new-car fleet is only 150 grams per kilometer, equaling a fuel consumption of 5.9 liters per 100 kilometers. And what’s even more amazing is the performance our cars achieve with these low emissions: 170 Horse Power or 125 kW.

And we plan to reduce our fleet’s CO2-emissions worldwide by at least another 25 percent between 2008 and 2020.

However, ecological responsibility as an automaker is only met if we maintain a sustainable production system as well. 2009 marked the fifth consecutive year that the BMW Group was named the world’s most sustainable automaker by the Dow Jones Sustainability Index.

We are also involved in the Olympic Games:

BMW will continue to be a sport-inspired brand. We at the BMW Group continue to deliver maximum performance, tackle new challenges and sharpen our competitive edge.

Premium constitutes a special obligation to assume responsibility as a good Corporate Citizen.

Growth will pick up in key automotive markets such as the US and China this year. Nevertheless, the effects of the crisis will persist and continue to define our business for quite some time. Although the competition will remain fierce, we at the BMW Group are all motivated and ready to rise to the challenge.

We have two priorities in 2010: Profitability and shaping our future.

Here is a perfect example: The BMW Vision Efficient Dynamics:

And you can be sure: Our Megacity Vehicle will also be fascinating.

This innovative car will be built at our Leipzig plant, our future Center for E-Mobility Production. Two Bavarian locations are also involved in this project:

We consider carbon fiber a cutting-edge material for the auto industry. Our efforts will make sustainable mobility possible in urban environments. In line with our corporate philosophy, the energy demand for producing carbon fiber will come from hydropower. We are currently looking for a suitable location in North America to set up our joint venture plant.

We believe that a company’s global footprint and its ethical principles will play an increasingly important role in the way people do business. Acting sustainably now will pay off in the future. The BMW Group is clearly leading the way.

In early March, the BMW Group was ranked by Fortune Magazine as the most admired automotive company in the world. This distinction was given to us because we are not only the leading premium automaker with regard to sales volume, but we also managed to use our resources efficiently and reduce our fleet emissions significantly in a very short period of time.

You can be certain: We have a clear path forward.

We will remain an independent company that takes a long-term approach and acts in the best interest of all stakeholders. This year marks the turning point toward long-term profitability as we remain focused on achieving our 2012 targets.

Thank you very much!