The concept car BMW Vision EfficientDynamics – star of the international automobile show IAA in Frankfurt 2009 – has won the Louis Vuitton Classic Award. At an evening gala in BMW Welt the chairman of the Louis Vuitton Classic Awards jury, Christian Philippsen, presented the award to Adrian van Hooydonk, Head of BMW Group Design. The prize for the best classic automobile restored true to the original went to Jon Shirley for his Alfa Romeo C2900 B Touring Berlinetta of 1938, which last year won the Trofeo BMW Group at the Concorso d’Eleganza Villa d’Este by Lake Como.

The chairman of the jury said that the BMW concept car showed what sustainability mobility could look like: “A breath-taking concept featuring avantgarde technology and a remarkable interior.” 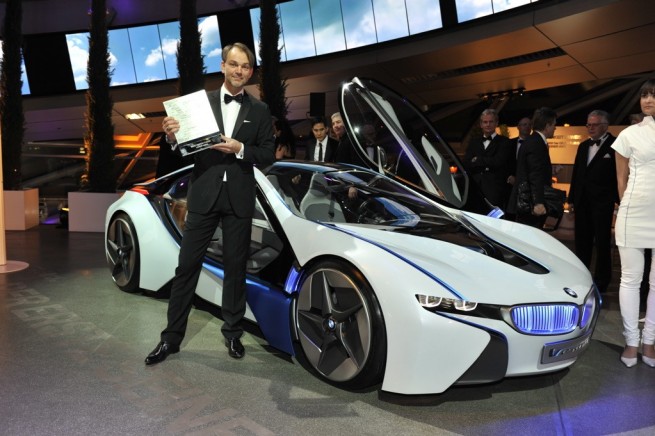 In his speech on the evening of the award ceremony, Philippsen described the Vision EfficientDynamics as “the modern version of the Alfa Romeo Berlinetta”. He said it looked “dynamic and inviting” and was still a “typical BMW” in spite of its extravagant design”.

Adrian van Hooydonk said he was honoured to receive this “prestigious design award” for the concept car Vision EfficientDynamics. He specifically emphasised that the award recognised the work of his entire team, without whom the Vision EfficientDynamics would never have been given its “striking appearance”. Van Hooydonk went on to say that “design always looks far ahead and tries to anticipate developments of the future” and that this was something which had been achieved in an exemplary manner with the award-winning concept car.
The jury characterised the rare Alfa Romeo Berlinetta as a “masterpiece of timeless beauty”.

In his speech, the chairman of the jury described the classic car as “wonderful, sensual, of remarkable proportions and with an engine whose sound was pure music”. He also said that this was hardly surprising since this Alfa Romeo was “conceived of and built by two geniuses”.

The so-called Double Cone of BMW Welt in Munich provided a fitting backdrop for the automobile design event. Head of Louis Vuitton Germany Tom Meggle welcomed the 150 guests surrounded by award-winning vehicles. He said he was very glad to “celebrate the Munich premiere of the Louis Vuitton Classic Awards in the Double Cone of BMW Welt since this venue combined the tradition and creativity of BMW – both things which Louis Vuitton stands for”. The Louis Vuitton Award was developed by the luxury goods company’s innovation department, which also undertakes projects with major automobile manufacturers. BMW collaborated with Louis Vuitton on the BMW C1 scooter, for example. In 2009 a Louis Vuitton Special Award went to the BMW concept car GINA which channelled visionary power into providing bold and thought-provoking impulses for future mobility.

Louis Vuitton has stood for the art of stylish travel since 1854. Since 1987 the company has been part of the LVMH Group (Moët Hennessy.Louis Vuitton), which has become one of the most prestigious makers of luxury goods in the world under the leadership of Bernard Arnault. Under Design Director Marc Jacobs, who has given Louis Vuitton its shape and colour since 1997, the portfolio was extended to include men’s and women’s clothing, shoes, watches, jewellery and sunglasses. Here, traditional craftsmanship has been combined with flair and innovation to create the perfect lifestyle experience. Louise Vuitton currently has a worldwide network of stores.

Berlin fashion designer Michael Michalsky also added his name to the guest list. He designed the hostess outfit for the world premiere of the concept car BMW Vision EfficientDynamics at the IAA in Frankfurt, with the car’s design style, silhouette and materials providing his source of inspiration. Echoing the interior of the vehicle, the designer created a two-piece outfit consisting of tight-fitting leather leggings and a mini-dress made of white nappa leather. The exterior is reflected in the blue lines on the side, emphasising the delicate but sporty silhouette.