With the launch of the facelift for the BMW X5 (E70), it is also time to compare the revised design and engine line-up to its classic competitors from Ingolstadt and Stuttgart. While design can be quite subjective and usually based on personal preference, the technical details are the one that remain set in stone and help us differentiate between similar models.

To compensate for its clear disadvantages, Audi has already announced the next Q7 will save about 440 lbs (200 kg). It is also worth noting that the Q7 is about 9 inches(23cm) longer than the X5, and around 12.2 inches(31 cm) longer than the M-class.

While you can order all three models with the Lane Change Warning technology, Active Cruise Control and a rearview camera, the BMW X5 offers even more exclusive optional equipment.The Head-Up Display provides additional comfort and reduces in some situations the need to monitor the speedometer, allowing the driver to focus on the road ahead. In addition, the BMW X5 offers the option of side cameras integrated in the front wheel arches (side view) and also a view of the vehicle from above (surround view).

BMW X5 features a Professional Navigation system with 8.8 inch LCD, the largest one when compared to its competitors. Audi Navigation Plus MMI comes with a 7.0 inch LCD and 6.5 inch LCD in the Mercedes COMAND APS system. One unique selling point for the X5 is unrestricted Internet access available in Europe. 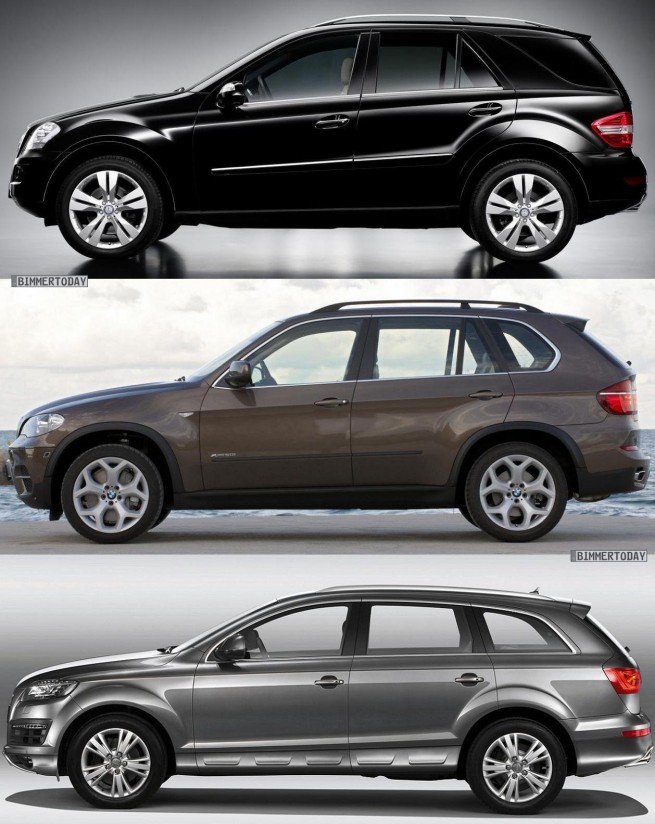 Now, let’s get to the fun part: engines. Starting wit the “top dog” from BMW, the xDrive50i, powered for the first time by the 407 horsepower Twin-Turbo V8 engine found in several other BMWs. Its equivalent, at least on paper, from Audi is the Q7 4.2 FSI which produces 357 horsepower. Mercedes-Benz joins the game with its ML500 and 388 horsepower.

As we mentioned earlier, the exterior design brings out different emotions in each of the above brands’ fans. While some are fond of the flashier, younger looking Q7, there are plenty others that enjoy a classic, solid but beautiful design seen on the X5 or the ML.

So we decided to leave our input out this time and instead, we’ll let you vote again.