Historically, BMW has always been compared to its German compatriots from Ingolstadt and Stuttgart (Audi and Mercedes-Benz) and from time to time, vehicles produced by Lexus or Infiniti would jump into play. But now, surprisingly, there’s a British company that’s actually in the mix, not a new contender, but rather a classic in the automotive industry.

You see, Jaguar has always produced fine cars. But then it came the S-Type and their ambitious goals to try and gather up some sales from the BMW 5-Series, Audi A6 and Mercedes-Benz E-Class.

It didn’t go over so well and Jaguar went back to the drawing board.

Jaguar XF – “The New Kid On The Block”

Last year, Jaguar introduced their latest sports luxury sedan, the new XF. Looking at some of the recent sales numbers, the XF has proven to be a success for Jag, and a true sales stealer from the German Big 3. While the BMW 5-Series is still the sportiest of its competitors, Jaguar is out to give it a go with the XF and its M5 slayer, the XFR.

Design wise, the XF was supposed to be a mirror of the C-XF Concept, but according to many automotive journalists, it fell a bit short. While the back-end reminds us of an Aston Martin design, in a gorgeous way, the front-end is somewhat boring and pale with an interesting choice of headlights sculpted into the bonnet.

Looking from the side, the Jaguar does stand out with its athletic appearance, but yet simple, with a single character line sweeping alongside the car and wrapping around. 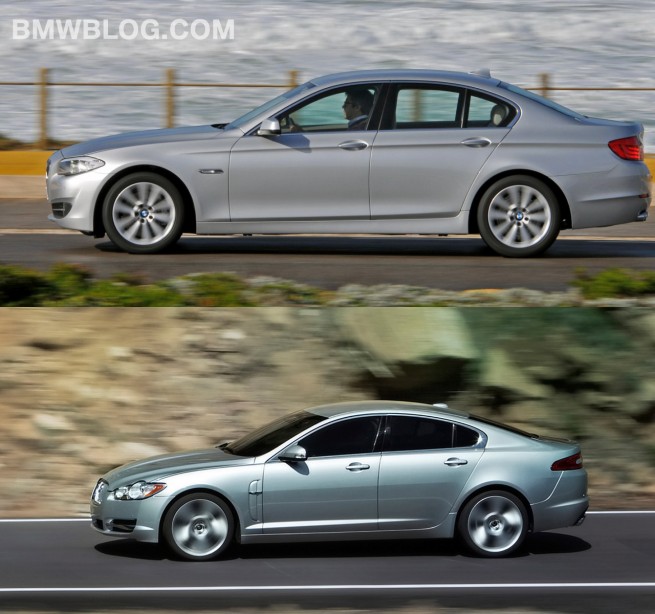 Inside, as expected and seen across the line-up, Jaguar placed a higher priority on materials and craftsmanship, and according to Ian Callum, Design Director at Jaguar, the XF has more wood than any Jaguar since the MkII.

The F10 5 Series exterior design is less radical than the E60 was back in its time, with a more classic lines flowing across the side and with an aggressive, but somewhat safe front-end. The front-grille is less massive than the one found in the 5 GT or the 7 Series, and it integrates well with the sporty bonnet. The rear-end design has always been an area where BMW typically has taken a less aggressive look to appease more of the subtle luxury crowd, but now they really give you something to stare at when you’re trailing behind the new car, for whatever reason that may be… The LED taillights are also been highly praised by many BMW fans.

When it comes to luxuries and sportiness, the XF and 5-Series are very close. But the Jag does have somewhat of the edge whenever you get into it and start wondering how to start it and go. The dial that slowly rises from the center console acts as the selector for the transmission… That’s pretty sweet. Also, the air vents open up whenever you turn the car on as well. The vehicle is also equipped with what Jaguar calls, “JaguarSense”. All you have to do is lightly touch pretty much anything in the car to turn it on/off along with increase or decrease the levels of something.

In terms of style, class and craftsmanship, well that’s up to the customer these days. Jaguar has certainly come up in the world of all three of these qualities. Where they were known for such things for so long, they had let them slip with cars like the S-Type and X-Type. But that’s all changing for the better. Especially since they’ve been rated very highly by J.D. Power and Associates that last few years. 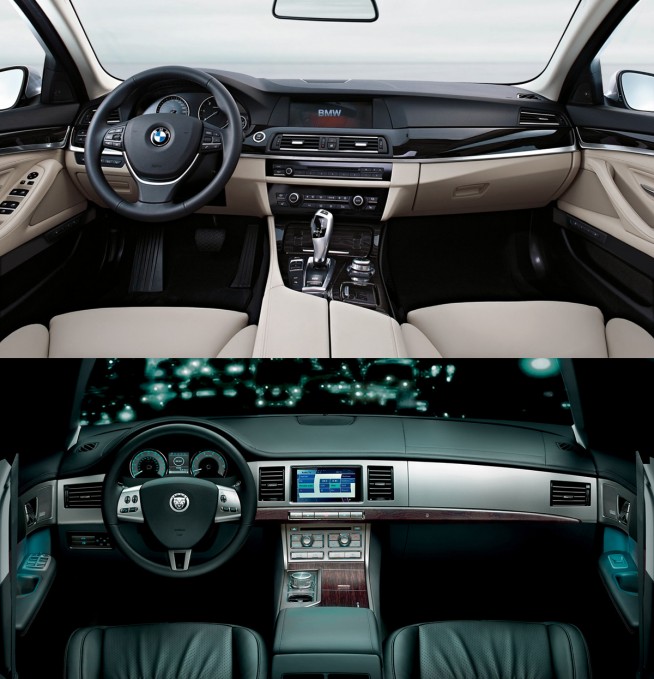 BMW, however, has always kept a pretty firm grasp on the same qualities. There have been a few BMWs in the past that have wavered on such ideals, but now with the new F-code cars, it’s all going to become 100% second nature.