With days before the International Media Launch of the 2011 BMW 5 Series, one of our readers, Tiago, sent in some real life photos of the latest, redesigned, 5 Series luxury sedan.

The photos were taken during a presentation of the entire 5 Series family in Portugal, the same country where the first media drives will take place next week and we will be there to report live our first driving impressions.

Looking again at these photos, we observe that the new F10 5 Series carries some design elements seen in the the current 2010 3 and 7-Series models. The headlights and front end share a lot similarities with the 5 GT and the 335i. The headlights are slightly modified over the 3-Series units and much smaller than the 5-Series GT, making the new F10 its own uniquely styled BMW. The eyebrow remains an important characteristic in the latest headlights’ design. The hood is a design feature shared with the current 6 and 3-Series, a look enhanced by the creases coming across the hood. 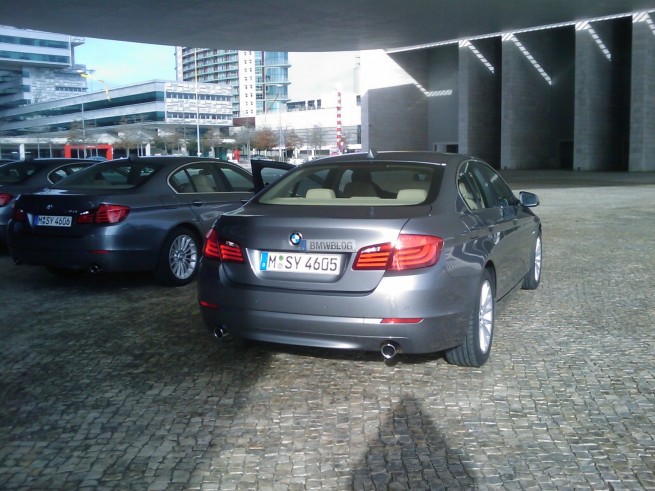 The rear-end of the new 5 is where some new business happens. BMW has typically taken a less aggressive look in the rear-end department to appease more of the subtle luxury crowd, but now they really give you something to stare at when you’re trailing behind the new car, for whatever reason that may be… Notice how the taillights look like the 3 and 7 cars, but with a more sculpted lens.

Those of you craving for more photos, stay tuned, we will have a full gallery next week.

Thank you for the photos Tiago!