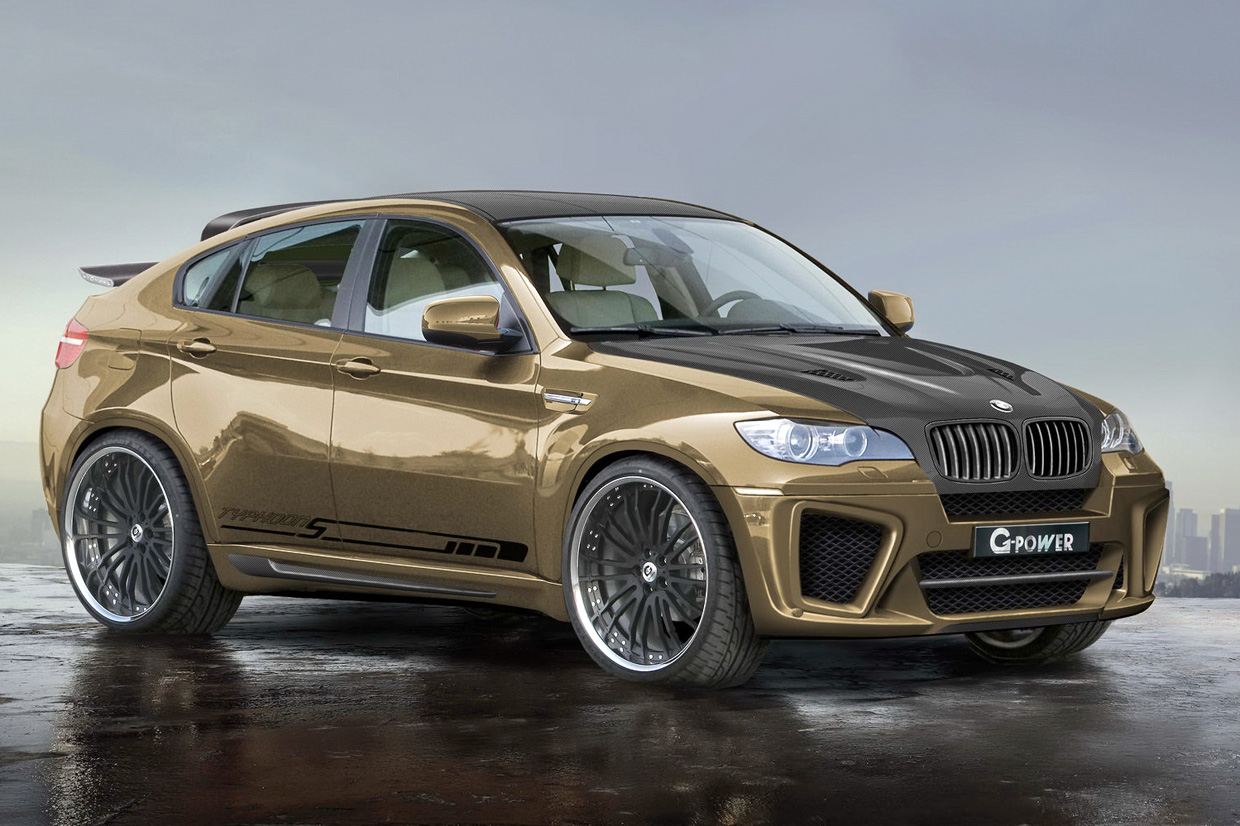 The new G-POWER equipment package for the BMW X5 M and BMW X6 M is available! As soon as the two models based on the M-series have been delivered to its first customers, G-POWER already offers an entire refining kit for the BMW X5 M und X6 M an. Availability? Immediately!

Derived from the G-POWER Widebody-Kit TYPHOON, G-POWER presents an excitingly styled aerodynamics pack made of full carbon which renders 15 percent more cooling power to the 4.4l V8 BI-Turbo engine in the BMW X5 M and X6 M and therefore clears the way for increasing the basic performance by 45 hp to altogether 600 hp. 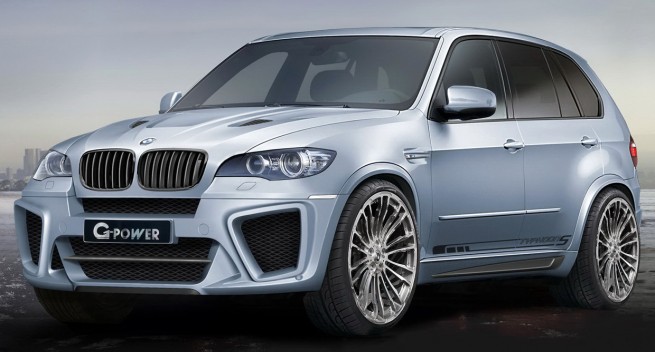 The first thing catching your eye with M-models modified by G-POWER, is the front skirt made of full carbon which entirely replaces the original component part. The front skirt with the striking air inlets derives from the G-POWER Widebody-Kit TYPHOON RS and turns the visual appearance of the BMW X5 M and X6 M significantly more aggressive. Due to the elaborate design, the aerodynamic lifting forces at the front axles could be also reduced. A further highlight is the G-POWER TYHPOON bonnet made of Kevlar hybrid or full carbon which ensures an improved removal of the hot exit air from both turbo chargers out of the engine compartment by a central Venturi engine compartment ventilation for driving and 2 lateral ABS-grids for the standard ventilation. Moreover, the new face of the BMW X5 M and X6 M are formed in a subtle way.

Moreover, the G-POWER full carbon add-ons for the serial side skirts perfectly and harmonically combine the visual intersection between the wheel houses. With the X5 M, these contain forged, one-part G-POWER SILVERSTONE EDITION aluminium wheels in the dimensions 11×23 and 12×23 inches, whereas the X6 M is equipped with three-part G-POWER RS forged wheel in the same dimension (if desired, also available in 22 inches). As far as the tyres are concerned, G-POWER counts on balance and uses 315/25 ZR 23 high performance tyres by its development partner Michelin for optimal traction and dynamic handling which are further enhanced by the G-POWER sports spring set and a lowering by additional 30 mm.

The BMW X5 M and X6 M are both perfected by the G-POWER full carbon diffuser which elegantly emphasises the 4 x 100 mm end pipes with G-POWER logos. Optionally, also a G-POWER full stainless steel end muffler is available. It enhances the 4 x 100 mm end pipes also with the patented DEEPTONE sound which is so typical for G-POWER. Exclusively for the BMW X6 M, a rear spoiler made of full carbon which additionally reduces the downforce at the rear axle can be optionally ordered with the rear diffuser.

But the appearance of the BMW X5 M and X6 M is not only visually improved by the G-POWER TYPHOON S aerodynamics pack. Due to the enlarged air inlets at the front skirt and the exit air outlets at the bonnet, more cold air reaches the water coolers and oil coolers at the car front. Therefore, the cooling performance improves by 15 percent. This is the basis for a thermally healthy performance enhancement by an electronic optimisation developed by G-POWER which is based on changing the engine characteristics and removing the V-max limitation. Therefore, an additional 45 hp are generated and the overall performance rises to mighty 600 hp at 6,000 r.p.m and 700 Nm torque from 2,000 r.p.m.

The enormous performance potential of the BMW V8 BI-Turbo engines modified by G-POWER empower the two “Off-road cars” with driving performances catapulting them into the top group of their vehicle class: the acceleration from 0 to 100 km/h only takes 4.5 seconds. After 16.2 seconds, already 200 km/h are achieved. The maximum speed is more than 300 km/h.

G-POWER enhances the interior of the BMW X5 M and X6 M with exclusive accessories such as a ergonomically formed sports steering wheel, a speedometer in G-POWER design and noble carbon covers for the side linings, central console and dashboard. Further wishes can be fulfilled with exclusive interiors in all possible leather- and ultra suede colours.
The aerodynamics pack TYPHOON S can be obtained from € 6,990 plus assembly at the G-POWER premises in Autenzell. The price for the SILVERSTONE RS or EDITION wheel set with MICHELIN tyres is € 8,865.55. The G-POWER full stainless steel end muffler costs € 3,021 and the G-POWER performance enhancement up to 600 hp can be obtained for € 4,701.68. 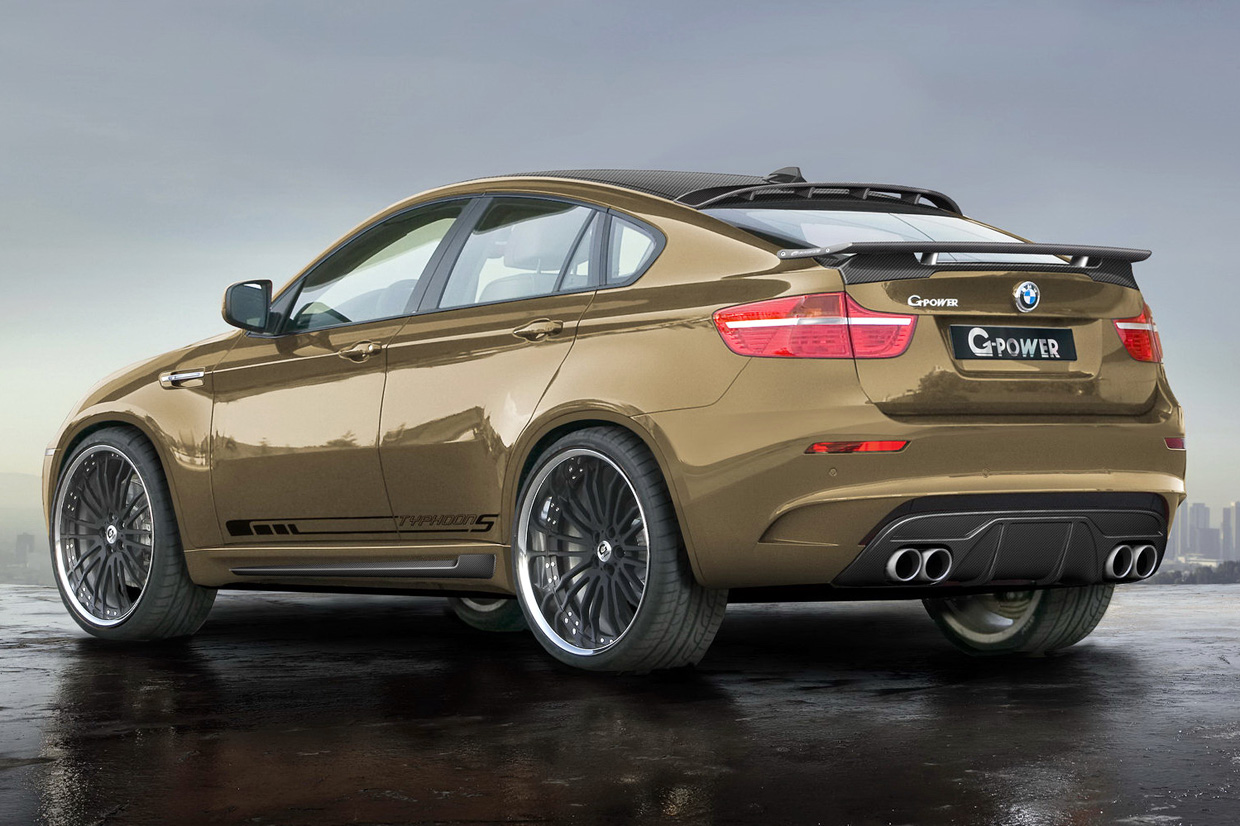 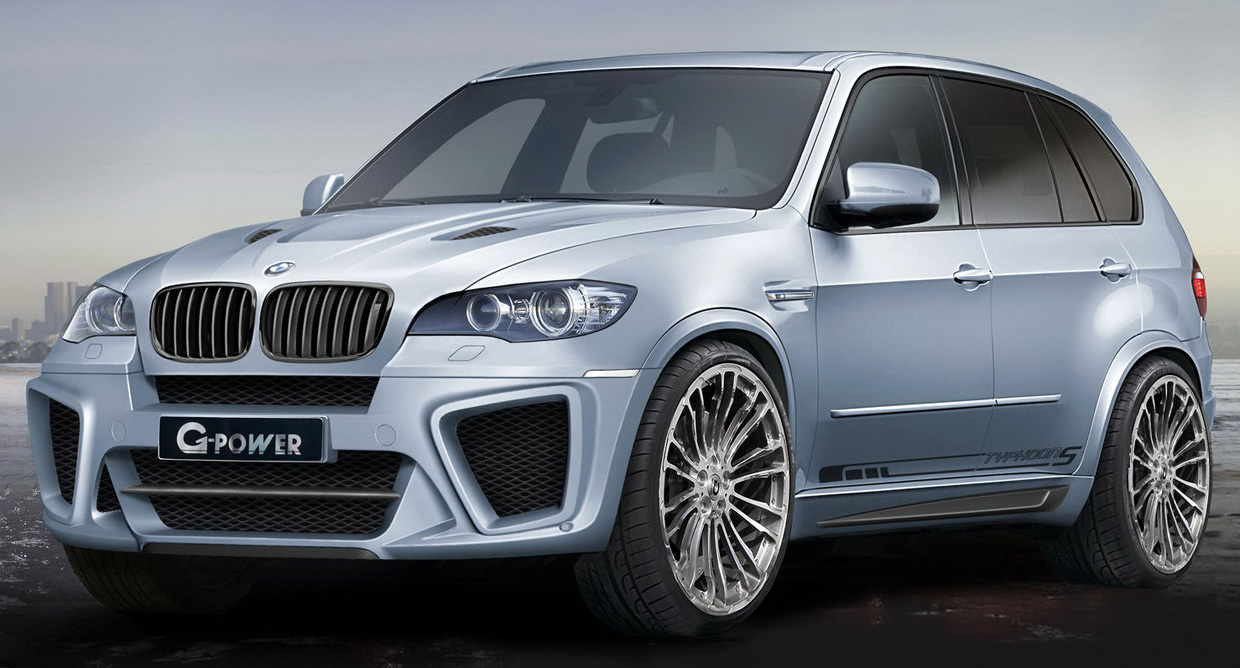 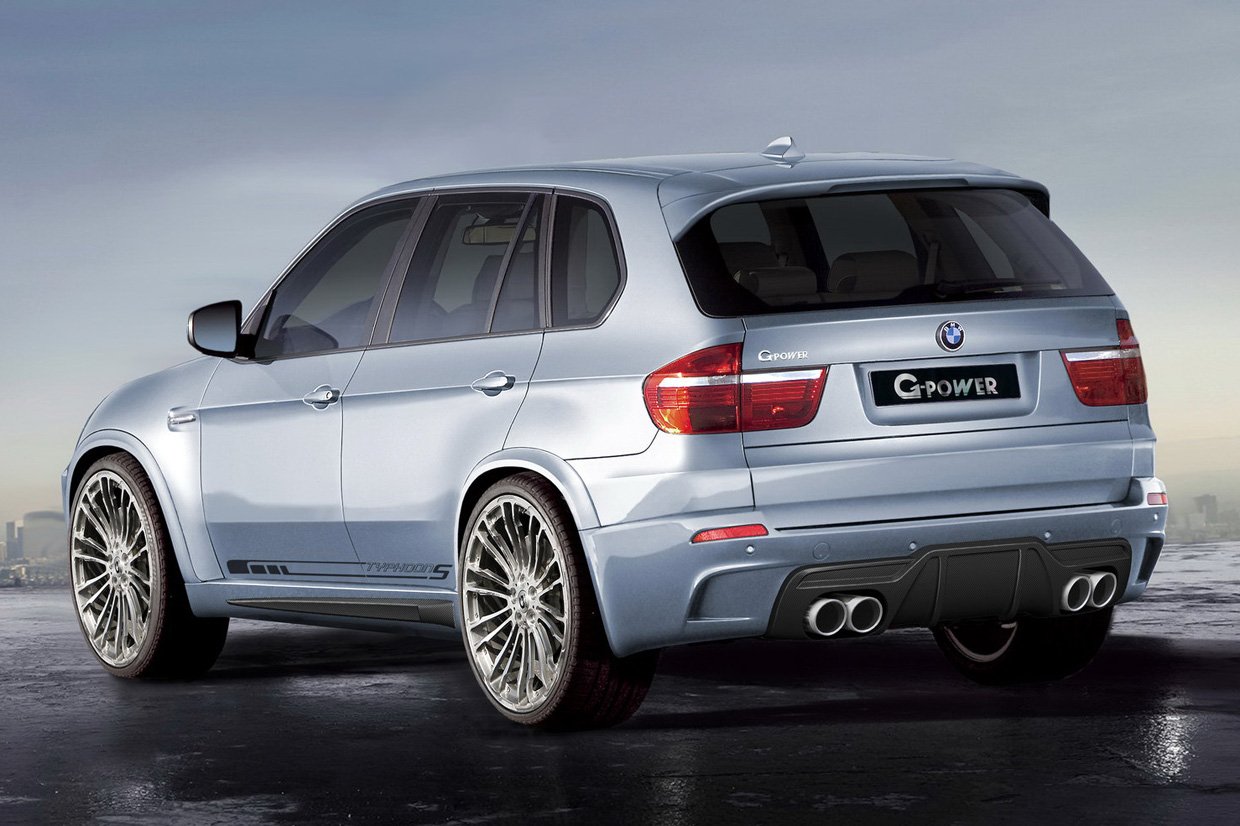