Home » Rumor: BMW X5 Facelift to include an xDrive40d model

While it has not been officially confirmed and could be still classified as a rumor at this point, we have just learned through one of our sources that the BMW X5 E70 LCI (facelift) will include a new model. Dubbed xDrive40d, the facelifted X5 model is powered by the same the 3.0-liter engine found in the 740d. The engine delivers 300 horsepower and 442 lb-ft of torque (600Nm).

The engine is matted to the more powerful and fuel efficient 8-speed ZF automatic transmission. The idea behind this new naming convention is to showcase a smaller, powerful, fuel efficient and low CO2 emission engine that would give the large 4-5 liter diesel engines from Mercedes and Audi, a run for their money. Based on the current information we have at hand, the X5 xDrive40d will not be available in the U.S.

Other X5 models have been confirmed as well and indeed, they will receive the rumored turbo engines we mentioned a few days ago. The xDrive35i is powered by the 3.0 liter six-cylinder twin-turbo engine outputting 300 horsepower and 295 lb-ft of torque (400Nm). The high-end xDrive50i gets the same engine from its “brother”, X6 50i, the 4.4 liter V8 engine producing 407 horsepower and 442 lb-ft of torque (600Nm). 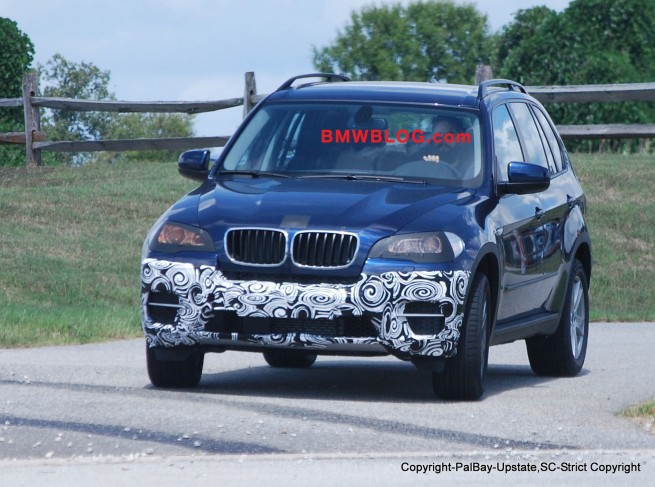 In the U.S., we will retain the current xDrive35d model and we’ll get the new turbos: xDrive35i and 50i.

3 responses to “Rumor: BMW X5 Facelift to include an xDrive40d model”