At a ceremony held in Beijing on Thursday, the BMW Group and Brilliance Automotive Holdings Limited signed a Memorandum of Understanding (MoU) to build a second production plant at the Shenyang site. The investment volume for the new plant amounts to 560 million euros. Construction work is scheduled to begin in 2010, with the start of production slated for early 2012.

“Brilliance Automotive Holdings Limited is a reliable joint venture partner with whom we have already worked successfully for more than six years.  Our plant has reached its capacity limit – so we are now taking the next step. The decision to build a second plant demonstrates that we are investing in our future in China and that we intend to participate in the strong growth in the Chinese market,”  stated Friedrich Eichiner, member of the Board of Management of BMW AG, responsible for finance and vice chairman of BMW Brilliance Automotive (BBA). “It is also an important strategic step towards reducing our exposure to currency fluctuations,” Eichiner added. 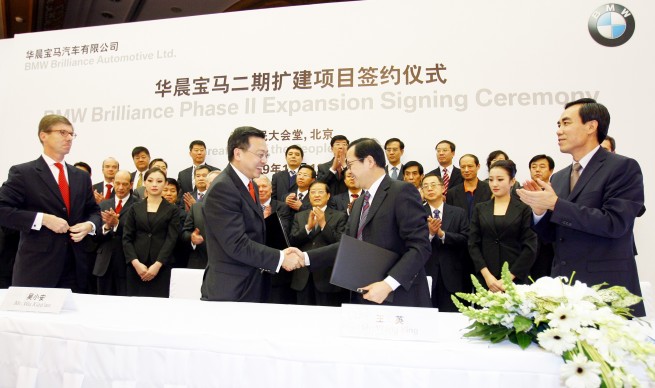 The joint venture has produced BMW 3 Series and 5 Series vehicles since 2003. A total of approximately 150,000 vehicles have so far rolled off the assembly line, with 450 million euros invested since the joint venture was founded. In a first step, the annual production capacity will be increased from 41.000 to 75.000 units. Upon completion of the second plant there will be a total annual production capacity of 100,000 units. Around 1,000 further jobs will be added to the 3,300 existing jobs in Shenyang.

China is the BMW Group’s fourth largest market. The company has maintained its growth in the country throughout 2009 and in October reported an increase of 81% over the same period last year to 9,558 units. The BMW Group sold 71,952 vehicles (52,622 / +36.7 %) in the first ten months of the year, already exceeding the retail volume for 2008 as a whole. Eichiner: “We are aiming to set a new sales record in China in 2009.”

Production capacity will increase to 100,000 units

2 responses to “BMW Group to build second plant in China”