At the mid-point of a very wet Petit Le Mans, the BMW Rahal Letterman Racing Team’s No. 92 M3, driven by Tommy Milner, Dirk Mü ller, and Jörg Müller stood 2nd in the GT2 class. Under worsening conditions, the action-packed race was red-flagged after 4 hours, 49 minutes.

The running order was frozen and eventually made final, securing the team’s seventh podium of the 2009 season. Dirk Müller set the fastest GT2 lap of the race, with a 1:21.366 minute lap of the Road Atlanta circuit.

Earlier in the race, before a punctured radiator slowed its progress, the No. 90 BMW M3 of Bill Auberlen, Joey Hand, and Andy Priaulx was among the fastest GT2 cars. When the red flag fell, the trio was deliberately clawing back toward contention, but was forced to settle for twelfth-place. 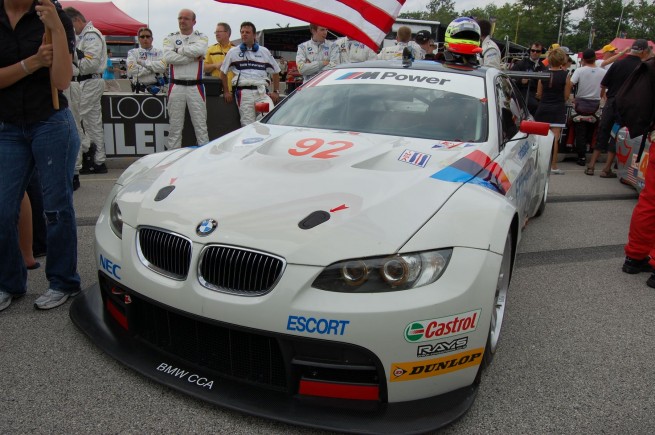 “I’d like to dedicate this podium to the crowd of BMW Car Club members and true race fans that spent their Saturday with us in the pouring rain. This was the first race we’ve started under wet conditions, so we took a very conservative approach. We managed to close the gap to the leaders with good pit calls and fast pit stops. Unfortunately, a mechanical problem dropped the No. 90 M3 out of contention or I think we would have had both M3s on the podium.”

“It’s disappointing that the race didn’t go the distance as I think we had the pace to win. At least we were able to end up on the podium again with the No. 92 M3, but it is a shame that Bill, Joey and Andy could not join them. This was a very tough race and I am pleased that both M3s are rolling onto the trailer.”