The two BMW Rahal Letterman Racing Team M3s will start fourth and fifth in the GT2 class for the 12th annual Petit Le Mans, after a qualifying session that saw the top-nine cars running within one second of each other. Following two days of practice under cloudy skies, this was the hottest and most humid session of the week, with track temperature reaching 118 degrees F.

Dirk Müller drove the No. 92 M3 to the fourth starting position with a 1:20.981 minute lap around the 2.47-mile Road Atlanta circuit, only .162 seconds from the pole sitter. Pitting
for adjustments on his seventh lap, Müller went out a second time, but his fourth lap stood as his fastest. On Saturday, Müller will share the No. 92 M3 with Tommy Milner and Jörg
Müller.

Joey Hand, driving the No. 90 M3, recorded a 1:21.219 minute lap, 0.238 seconds behind Müller. Hand also pitted for tire and suspension changes on his seventh lap, but his third lap stood as fastest. Hand will co-drive with Bill Auberlen and Andy Priaulx tomorrow. 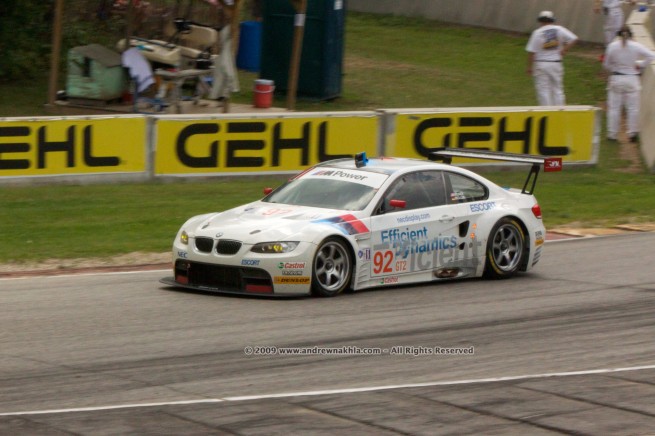 Earlier Friday, BMW of North America held a press conference to announce that the BMW Rahal Letterman Racing Team will return for a second season of ALMS competition in 2010.

Dirk Muller, driver, No. 92 BMW M3:
“That was a hot session! The track was very slippery compared to this morning. I was 0.7 seconds slower even though I tried everything. I was happy to be fighting for pole position
again. Our main competitors in the points are behind us so, although we did not get the pole, this result is not a disappointment.”

Joey Hand, driver, No 90 BMW M3
“I had a little off at the end of the morning practice session, but the guys got the car ready for qualifying with no problems. I ran easy early on to make sure everything was okay, but I think the heat caught everyone out today. As I pushed harder I realized we couldn’t go much faster, because I was getting very loose. In the remaining session time, we didn’t get it tucked in, but I know our pace is good enough to be very competitive in tomorrow’s enduro.”

Martin Birkmann, BMW of North America Motorsport Manager:
“A surprising outcome of the qualifying session with a first time pole sitter, but that is what makes the GT2 class so interesting. The track heated up significantly, so grip levels were much lower than earlier in the week and it certainly shook up the grid. Nonetheless we are starting ahead of most of our core competitors, and that’s ideally the sequence we’d like to
see when the checkered flag falls.”

Bobby Rahal, Team Principal, Rahal Letterman Racing:
“Our team is deliberately focused on having both cars see the checkered flag tomorrow evening. With a ten-hour race ahead, the qualifying positions are somewhat less important than usual. Nevertheless, capturing two top-five grid positions will give our drivers good chances for a clean start.”

The 12th annual Petit Le Mans is scheduled to start at 11:15 a.m. ET Saturday and will be broadcast live on SPEED television.