Going “Green” has supposedly been the hip thing to do for the last few years. At first, you had celebrities who were early adopters of vehicles such as the Toyota Prius or even the BMW Hydrogen 7. Other alternative energy vehicles have come along in the meantime with the Chevy Volt,  Tesla Roadster and the Fisker Karma – styled and built by former BMW Z8 designer Henrik Fisker.However, Most of these “Green” vehicles have impractical or somewhat half-baked ideas of vehicles that are unattractive and ultimately cause more environmental harm than they supposedly prevent with the ingredients and byproducts that go into the their manufacture. With regard to hydrogen-powered and fully electric vehicles, you get into the issue of infrastructure that must be in place to service vehicles – something that doesn’t come cheap and isn’t a quick fix. It would seem that nobody has come up with the fix for an energy crisis for what our world around us would require.

However, maybe BMW is well on their way or at least much further along than the competition. Due to be released at the Frankfurt International Auto Show in September, BMW shocked the world with an early debut of the new Vision EfficientDynamics Concept. The concept encapsulates the future of BMW’s push for efficiencies and fuel sipping technologies. But, many might not know this isn’t BMW’s first endeavor into alternative energy sourced vehicles – and we’re not talking hydrogen. 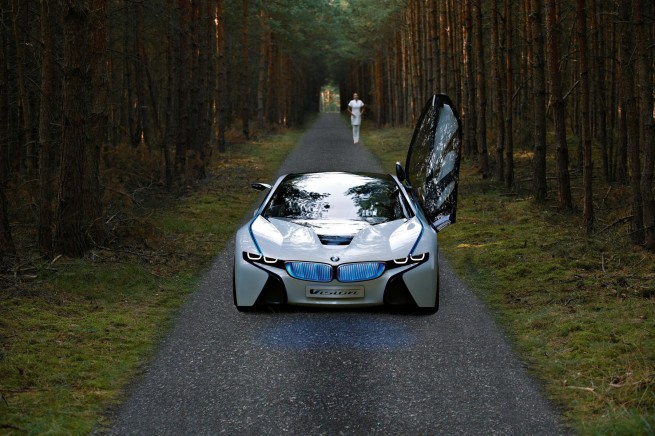 In the mid-1990’s BMW toyed with the idea of building fully electric car. The car was the BMW E1, a very small city car concept designed to maximize interior space while being powered by a small electric motor. The car was debuted in amongst the other electric cars of the early-to-mid 1990’s from other car manufacturers. However, as the cost of implementing this technology was exorbitant and the market was highly unreceptive, the E1 and other electic cars were abandoned, forever in the realm of concept cars. However, it was the first BMW to really demonstrate the ability the crafty Bavarians had to build a logical, compelling car for the masses, in Europe at least where fuel prices were already sky rocketing and had been for years. 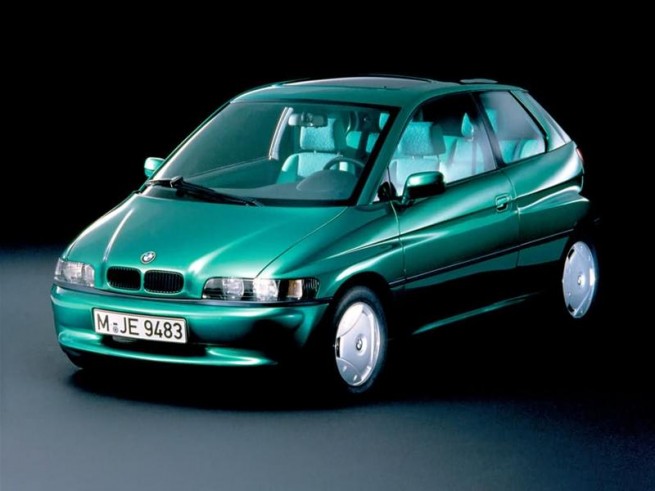 It would be another two major downfalls of the stock market, a two-front war in the Middle East and a sudden sky rocketing of fuel prices before the United States would fully warm up to the idea of alternative fuel vehicles such as the Prius. The fuel crisis of the summer of 2008 found Prius’ going for above sticker in some markets and companies like Chevy scrambling to keep up with the rapidly changing market. However, BMW had concepts and ideas waiting in the wings. Ideas that are more practical than the microscopic Tesla Roadster, more fun and attractive than the Toyota Prius.

With the Vision EfficientDynamics Concept, BMW provides a more middle of the road alternative than most options currently on the market. The VED(as I’ll refer to it!) brings the fossil fuel market together with electric motors to provide a fast, yet efficient, package. The primary engine is made up of a 3 cylinder diesel producing 163HP and 214 ft-lbs of torque, mated to BMW’s new DCT transmission. In addition to the petite diesel engine, BMW have fitted the VED with two electric motors with lithium-polymer batteries lining the center of the car, around where the transmission tunnel is that power the front and rear electric motors. 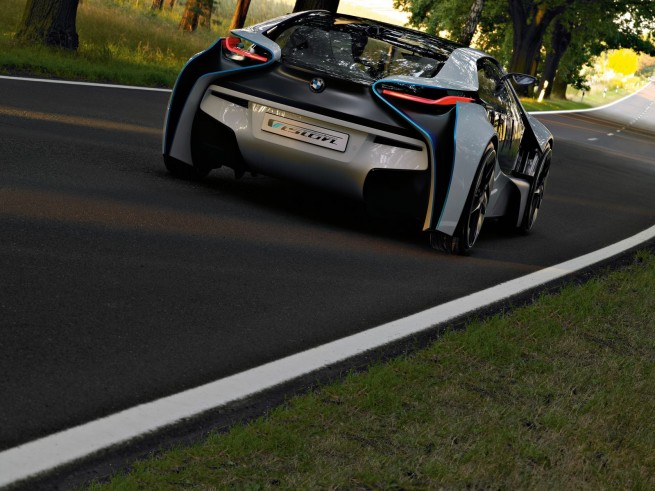 The way to power the battery packs? Plugging the BMW into a household wall socket. With the 3 engines? You have a combined power figure just over 350HP – a nice round number for power between the current 335i and M3. But what’s most important about the VED isn’t that it’s just that it’s a hybrid but a car that doesn’t require hydrogen stations on every corner or huge power sources lining curbs across the world, it just combines the infrastructure for fueling worldwide and light materials and simply improves upon the combination. So, this isn’t a pie-in-the-sky efficiency vehicle – it’s something that could literally be cruising the streets tomorrow with practically no change to how cars fit into our day to day lives.

So the VED carries with it the practicality of a Prius, the performance of a thoroughbred and the styling of a gorgeous Italian sports car. Yes, this car is gorgeous, while a real production car probably wouldn’t carry bodywork like this – it is still a very seductive car that could lead to an incredible production car, already pulling a front fascia similar to the M1 Concept released last year, a concept that had BMW fans and car fans around the world asking BMW to please produce a car. 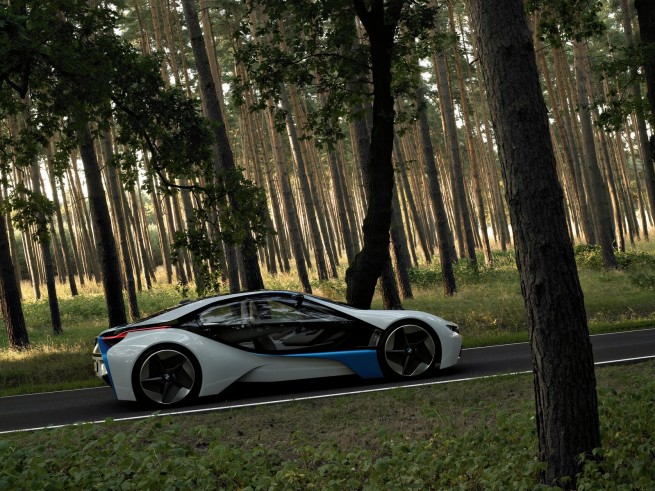 However, I digress, many articles have called the VED a “game changer” and I have to agree. This concept is a game changer in terms of the direction BMW has chose in building sporting yet efficient cars that also carry the luxury accouterments that customers have come to expect. This is also a game changer for the car industry as a whole. Yes, it’s possible to build efficient AND attractive transportation in mass quantities without having to drastically alter how cars are maintained, without having to remove the fun of the car. This is the missing link that it seems so many car manufacturers don’t get. Alternative fuel sources and hybrids don’t have to be boring! In fact, with the VED we find a hybrid that people want to be seen in – versus awkward, slow hybrids that we’re stuck with that are currently in showrooms. 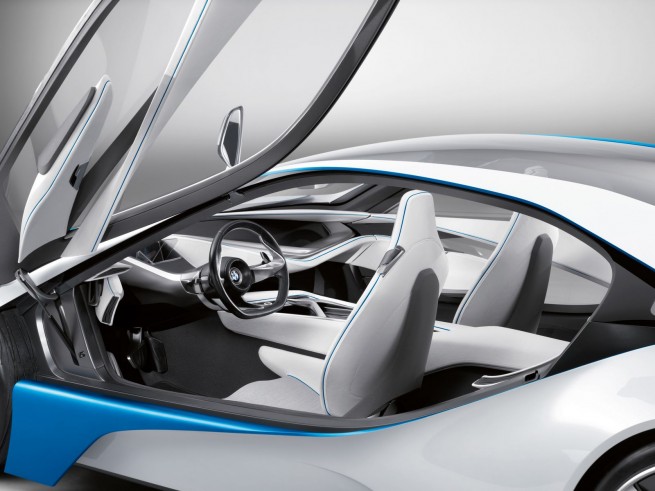 This car actually makes it hip to be Green – and not in the condescending, tree-hugging way that a Prius does. You can have a car that sips fuel but still lets you tear up your favorite mountain road. In a world post-$4.00+ per gallon, maybe we do need cars like this or at the very least, cars with the same concepts applied overall to vehicles, efficient lights, efficient power packs, efficient engines – I think BMW has just made an important case: efficiency doesn’t mean performance dies, in fact, the Vision EfficientDynamics proves just the opposite.

This gives many of us car enthusiasts hope that the fun of the car won’t die as car makers begin to move into a new age of propulsion.

12 responses to “BMW’s Vision EfficientDynamics Concept, The Hybrid I’m Not Embarassed to Drive”