It seems like BMW’s decision to retire from the Formula 1 Championship at the end of this year, had the opposite effect on the team. While in Valencia, Robert Kubica scored a point, at the end of Spa Francorchamps race today, BMW Sauber added another nine championship points.

While Robert Kubica improved from fifth on the grid to fourth in the Belgian Grand Prix, his team mate, Nick Heidfeld, was not so happy as he started third and finished fifth in the race. This is the exactly the total points the team has accumulated in all the other eleven races so far. It is also clear that the drivers are fighting to impress other teams for new contracts next year.

The next race will be the Italian Grand Prix which will take place at Monza on September 13th. 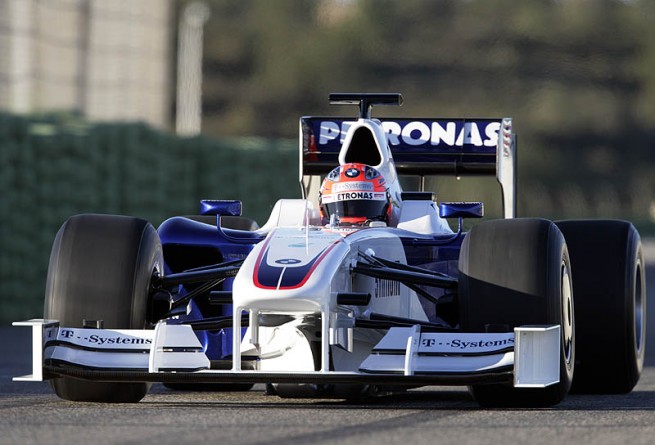 Robert Kubica, 4th
Fastest lap 1:47.664 min on lap 41 (3rd fastest overall)
“I managed to make a good start and was second after the first corner. I was surprised to see Kimi next to me going through Eau Rouge. Approaching the fifth corner he braked very late and went off. It is a very tricky place. He came back on the track right in front of me and I played it safe as we saw a lot of accidents there over the weekend. Although we had a slight touch, I was able to continue. At times we lacked a bit of speed but, of course, it is good to be fighting for podiums again. The result means a lot of points for the team and is good. Unfortunately we didn’t have the chance to achieve anything better. The result proves we are quite competitive on low downforce tracks, which is a positive sign for Monza. However, we have to analyse why the car was more competitive and felt better during qualifying yesterday.”

Nick Heidfeld, 5th
Fastest lap 1:47.371 min on lap 35 (2nd fastest overall)
“Although it is a good result for the team, I have to admit I’m disappointed. From third on the grid I had higher expectations, but I lost the race on the first lap. My thought pattern before the race went back and forth as to whether I should take the harder or the softer compound for the start. The harder was the quicker one but, of course, not the better one for heating up quickly. Because the sun was shining I went for the harder compound, and paid for it. After the start I tried to out brake Jarno on the inside of La Source, but I lost ground because the tyres weren’t warm enough. Up the hill to turn five several cars were in the gravel, including me, and that’s where I lost more positions. Later at my first pit stop I had to lock up the brakes in the pit lane to avoid crashing into Mark, who I was then able to immediately overtake on the track. In the last stint my pace was really good and I closed the gap to Robert. But, even though I was quicker than him, I couldn’t overtake because as soon as you are less than two seconds behind another car you start sliding due to losing downforce in the dirty air.”

Mario Theissen, BMW Motorsport Director: “After our best qualifying this was also the best race result of the season. With fourth and fifth we were the only team that managed to get both cars into the top eight, and we scored nine championship points. Nick lost the chance of a podium position on the thrilling first lap. Robert damaged his front wing right at the beginning, but was able to continue. A big compliment to the whole team for this strong performance.”

Willy Rampf, Head of Engineering: “We were all very excited before the start because we expected some action. And this happened exactly as expected. Unfortunately, Nick lost the advantage of his strong starting position in the chicane after the Kemmel straight. After this incident he was able to maintain a very good pace and he finally clinched fifth. Robert had contact with another car right at the beginning and lost part of his front wing. We checked the aero data and decided it would not make sense to bring him into the pits, which turned out to be the right decision. Today’s result is the reward for all our hard work during recent weeks.”