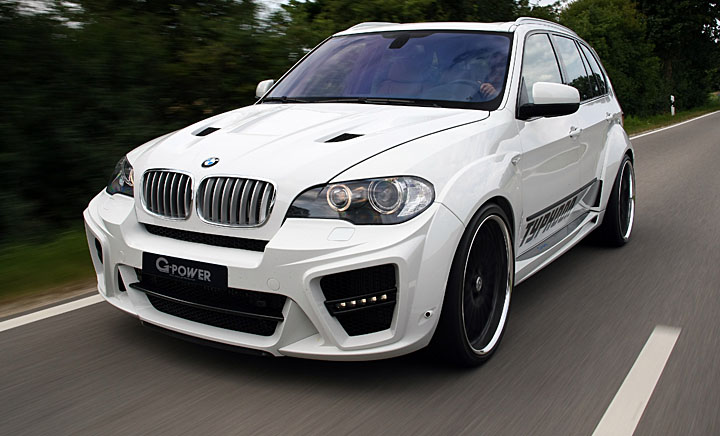 The German tuner G-Power has made a name for itself in the BMW community as being the one company that can squeeze out the most horsepower from a BMW. Their latest gimmick is the X5 Typhoon RS, an upgrade from an earlier model released in March which produced 525 horsepower.

They re-engineered the V8 4.8 liter engine and managed to squeeze out 625 horsepower and a torque of 516 lb-ft (700Nm). The engine is using the latest G-Power SK III RS Superchager with a boost pressure of 1.0 bar. This performance explosion originates in the core part of the G-POWER supercharger systems, the entirely newly developed T1-723 ASA radial supercharger which is used in the ALPINA B5S, B6S and B7 models and the  B6 GT3 race car. 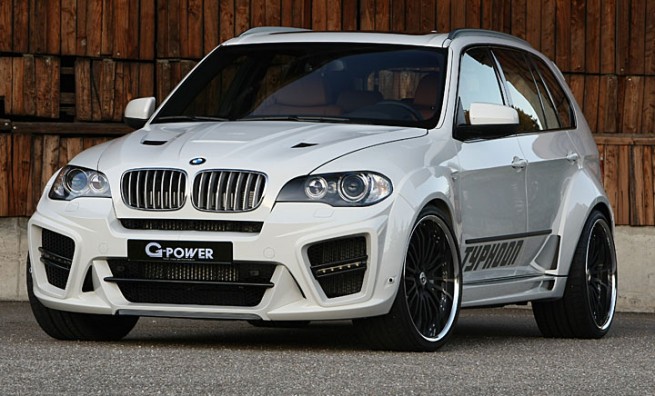 No pricing has been announced, but expected to be on the very high end side. 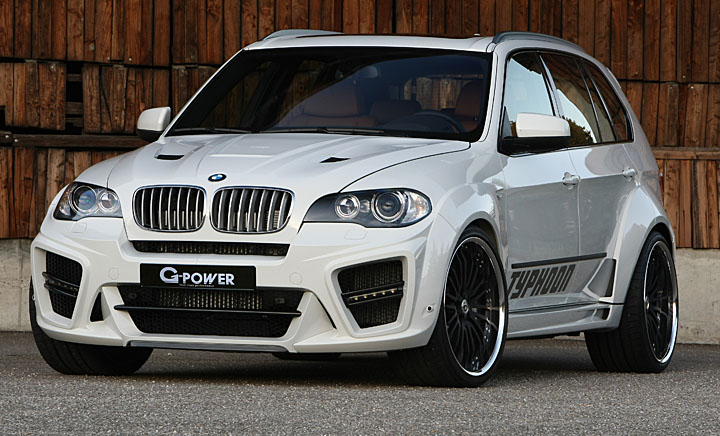 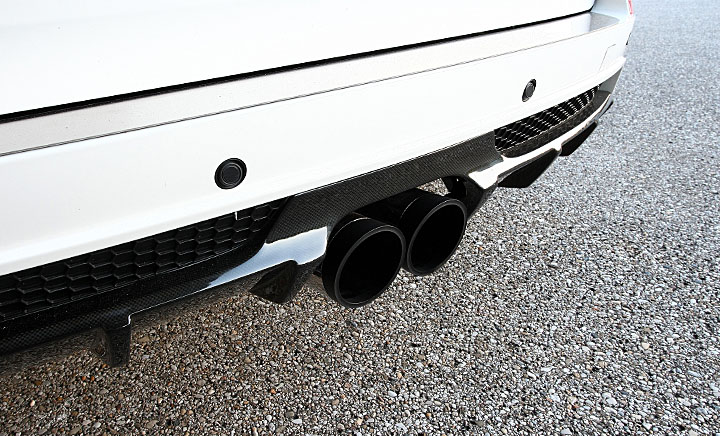 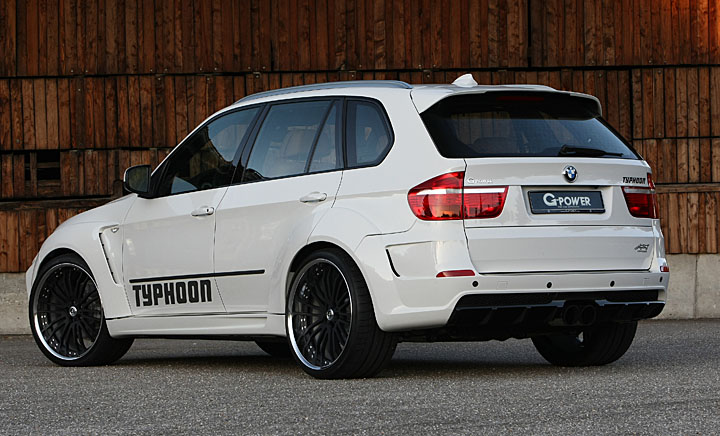 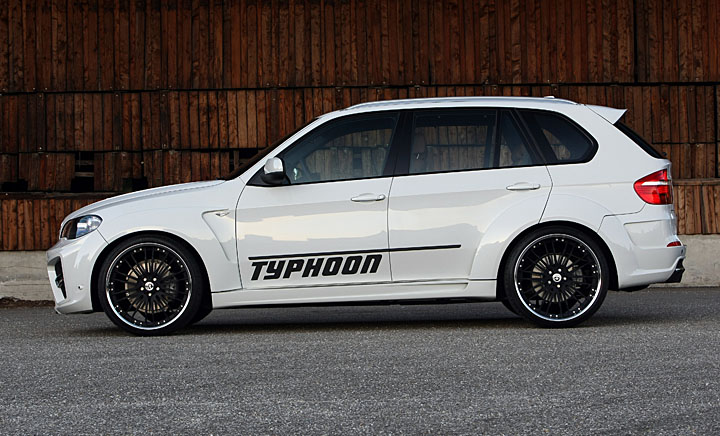 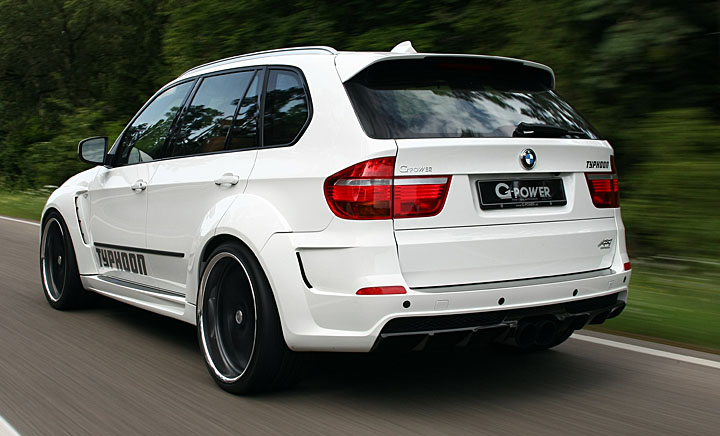 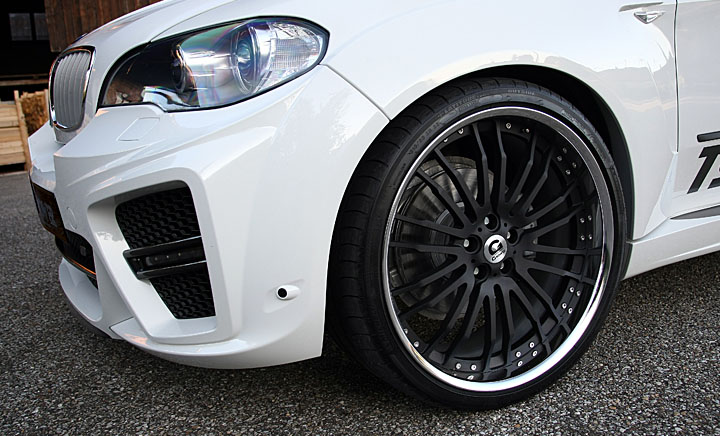 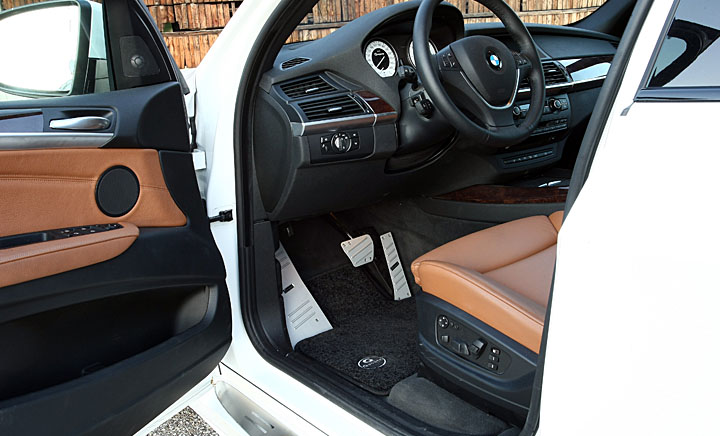 Brawny wing extensions and strikingly formed front- and rear skirts qualified for maximum aerodynamic efficiency, mark the appearance of the G-POWER TYPHOON RS. The body alteration in OEM-quality made of PU-rim has been developed by the G-POWER designers by using state-of-the-art CAD technology. Therefore, the basic car has been entirely digitalised with a 3D-scanner on the own company premises.

The elegantly formed G-POWER wing extensions at the front- and back axle which are naturally delivered with a perfectly matching inner wing extend the X5 by seven centimetres. They make room for extra-broad 23“ wheels and tyres. The G-POWER SILVERSTONE “forged” aluminium wheels in the dimensions 11Jx23 at the front and 12Jx23 at the back were especially designed for the TYPHOON RS and are the largest available model. Four high-performance tyres measuring 315/25 ZR 23 by the development partner Michelin render optimal traction and sporty handling.

In combination with the extended wings, especially the absolute independently styled G-POWER TYPHOON front skirt, the facial expression of the exclusive SUV is formed. The large air inlets do not only improve the overtaking prestige, they also guarantee an optimised cooling of the engine and the front brakes. Moreover, due to its elaborate shaping, the aerodynamic lifting forces at the front axle could be reduced.

The rear skirt of the TYPHOON RS has been designed like the front skirt and therefore entirely replaces the serial bumpers. Apart from the two striking end pipes of the G-POWER stainless steel sport end muffler, the diffuser also marks the rear appearance. And in combination with the spoiler which is attached to the boot lid and visually prolongs the roof line, the lifting forces at the rear axle are also minimised.

The TYPHOON side skirts do not only provide an aerodynamically favourable transition between the extensions: on their bottom side five LED units which can be activated by remote control or by pulling a handle at the door, illuminate the ground at both sides of the car. At the upper side, stainless steel inserts with an also blue illuminated G-POWER logo are integrated.

Another proof for the elaborate construction of the G-POWER TYPHOON broad-built version for the BMW X5 which is offered as a kit from € 12.185,– (net price) is the four-part underbody cladding.

Matching the dynamic appearance, G-POWER offers an extremely strong motorisation for the BMW X5 xDrive48i. In co-operation with ASA, the world-wide renowned developer and OEM-supplier of high-tech superchargers, a mechanic charging system for the eight-cylinder four-valve engine has been created.

The G-POWER SK III RS supercharger system gives the 4.8 litre engine a performance increase of 270 hp / 199 kW to 625 hp / 460 kW at 6,100 r.p.m. and renders a torque increase of 475 Nm to 700 Nm at 5,300 r.p.m. This supercharger technology guarantees – in contrast to turbo engines – a perfect throttle response at any time. In order to achieve this performance, an ASA T1- 723 charger with radial centrifugal clutch is flanged to the engine with a CNC-milled, high-strength framework structure. The supercharger which is powered by a crankshaft via the multi-rib belt has an oil flow which is integrated into the engine oil circulation for lubrication. The boost pressure is 1.0 bar.

This performance explosion originates in the core part of the G-POWER supercharger systems, the entirely newly developed T1-723 ASA radial supercharger. Moreover, supercharger systems are also used in the ALPINA models B5S, B6S and B7, and of course also in the ALPINA B6 GT3 race car, in which the ASA supercharger impressively confirmed its reliability and quality in the “Green Hell” at the 24-hour race at the Nürburgring this year. The exclusive use of components in OEM-quality is an essential part of the G-POWER philosophy and the basis for extraordinarily high quality, reliability and durability of G-POWER products.

The two-part carbon intake air duct with large, aerodynamic transverse sections, a large-volume aluminium charge air cooling system in the front of the X5 and a G-POWER SPEEDFLOW high-performance exhaust system which is entirely made of stainless steel and includes racing headers, racing catalysts and end mufflers, form the peripheral equipment of the supercharged engine and moreover render an earthy sound which emphasises the acoustics of the eight-cylinder engine.

Also, the engine itself is thoroughly refined by G-POWER. Starting with a new set of forged pistons for compression reduction, manufactured in the Formula 1 department at MAHLE, the BMW V8 engine is completely re-engineered. Eight new fuel injectors with a larger fuel mass capacity, a new ignition map for engine electronics and an additional re-cooling system for engine oil and cooling water perfect the engine makeover. Of course, also the serial transmission is modified and adjusted to the performance.

The enormous performance potential of the G-POWER SK III RS supercharged engine in combination with the six-gear automatic transmission and the xDrive 4WD enables the SUV to render a driving behaviour which confirms it as a top player in its vehicle class. The acceleration from 0 to 100 km/h only takes 4,5 seconds. After 16,0 seconds, the mighty five-door car already reaches a velocity of 200 km/h. The maximum speed is 285 km/h.

The G-POWER TYPHOON RS cockpit can be refined with exclusive accessories like an ergonomically formed sport steering wheel, a speedometer in TYPHOON design and sporty aluminium accessories. Further wishes can be fulfilled with exclusive interior equipments in all possible leather and ultra-suede colours.

The G-POWER TYPHOON RS can be ordered as a complete automobile, or alternatively, any BMW X5 E70 can be refined with individual G-POWER components of the high-performance SUV.