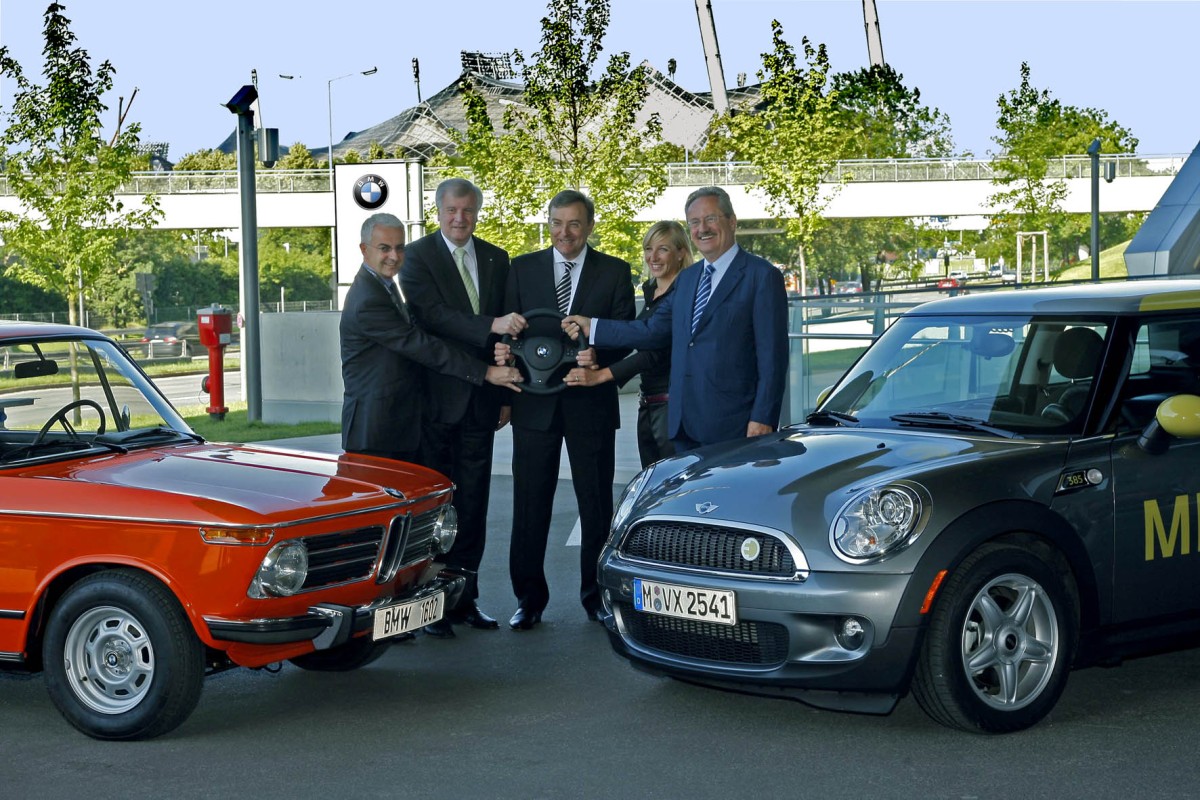 BMW Group has announced that is supporting the City of Munich in their attempt to win the  2018 Olympic Winter Games event. BMW will be offering  three to five million euros for the first application phase which will run between 2009 and 2011. This includes non-cash contributions such as the provision of vehicles, for example.

While we’re excited to see BMW stepping up for the Munich citizens and the entire Bavaria Land, we’re going to root first for our hometown Chicago which is still in the race for the 2016 Olympic Summer Games.

We would be thrilled to attend both events within a two year time period…. 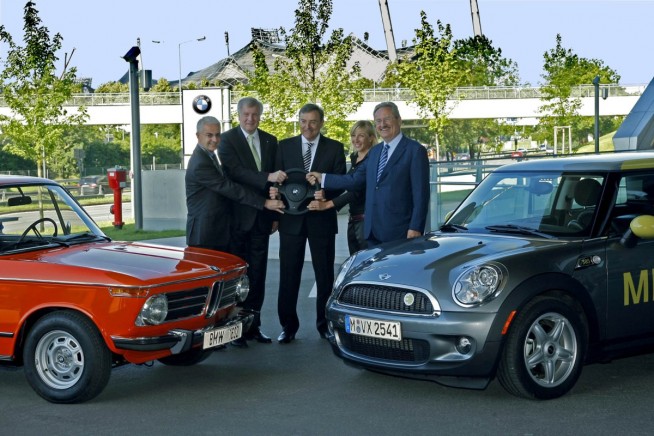 The BMW Group is supporting the bid put together by the Bavarian state capital Munich to host the 2018 Olympic Winter Games. “Munich and the BMW Group are inextricably linked. Sport lies at the heart of our identity and at the heart of the BMW brand. We want to play our part in bringing together sportsmen and women from around the world to compete fairly against each other here in our home city in 2018. As the global automotive leader in the area of sustainability, we are promoting and supporting the idea of a sustainable Olympic Winter Games in Munich in 2018. If the Olympic Games come to our city, we want to be part of them,” said BMW Group Chairman Dr Norbert Reithofer at a press conference at BMW Welt in Munich on Thursday. The bid will also benefit from the company’s extensive experience in the field of mobility concepts.

“We see the bid as a long-term investment in the future, aimed at creating the values of tomorrow. The acceptance of social responsibility is an inseparable part of our corporate self-image. In its role as a corporate citizen with customers and employees throughout the world, the BMW Group supports international understanding and cross-cultural exchange,” Reithofer continued.

The BMW Group will be contributing a total of three to five million euros to the 2009 to 2011 application phase. This includes non-cash contributions such as the provision of vehicles, for example.

The Prime Minister of the State of Bavaria, Horst Seehofer, said: “I’m delighted that BMW, a flagship business of Munich and Bavaria with an international reputation, is giving its backing to Munich’s bid for the 2018 Olympic Winter Games. I would like to thank BMW Chairman Dr Reithofer personally for the company’s substantial contribution towards the bid both financially and in other forms. In order to bring the 2018 Olympic Winter Games to Munich we need support on a national level, but also the backing and clear endorsement of important players here in the city. Through its tremendous support, BMW is once again showing its willingness to take on social responsibility. With sport, politics, industry and the public all pulling in the same direction, we have every chance of welcoming the 2018 Olympic Winter Games to Munich.”

Should Munich – together with the sporting facilities in Garmisch-Partenkirchen and the Berchtesgadener Land region – get the vote from the International Olympic Committee (IOC) in July 2011, the scene would be set for another chapter in Olympic history. Never before has a city hosted both the Olympic Summer Games and Winter Games. The BMW Group also played its part in the 20th Summer Games in Munich in 1972, supplying an electrically-powered BMW 1602 for the marathon and walking events.

The Mayor of Munich, Christian Ude, said: “If our vision for the 2018 Games in Munich becomes a reality, BMW could see the Olympic Games open outside its front gates, so to speak, for the second time. The city would like to thank BMW expressly for lending its support to its home city even in these economically difficult times and for contributing as a sponsor to our shared long-term success. BMW and the Olympics are as good a match as the stunning architecture of the Olympic park and the neighbouring BMW site. The alliance of BMW and the Olympics represents the embodiment of sportiness, energy and dynamism, as well as environmental responsibility and long-term success.”

Dr Thomas Bach, President of the German Olympic Committee (DOSB), was equally ebullient: “Munich is inextricably linked with the Olympic Games. The Summer Games of 1972 played a key role in the city’s development into the ‘Weltstadt mit Herz’ (world city with a heart). Many people all over the world still have marvellous memories of the Games, and those not yet born at the time would have heard only positive accounts. The 2018 Olympic Winter Games in Munich will achieve a comparable effect and provide a glittering showcase for Germany as a whole, but in particular for the state of Bavaria and the city of Munich, its people and its companies. We are delighted that the BMW Group – which, like the 1972 Olympic Games, represents a glowing advertisement for Munich – will be a partner of the bid committee Munich 2018. Shared success is a goal that extends beyond sport. This partnership will be a very active one, with the aim of securing Munich’s selection as the first city to host both the Olympic Summer and Winter Games.”

Richard Adam, Managing Director of the bid committee Munich 2018, added: “BMW has given the bid for the 2018 Winter Games a significant boost. The bid committee is particularly delighted that one of the world’s most powerful premium brands is lending the bid its full support. BMW is an international company with Bavarian roots and a reputation built on performance, strength, tradition and future orientation, as well as a commitment to achieving the highest standards. BMW and the Munich 2018 bid are a natural combination.”

Two-times Olympic speed skating champion Anni Friesinger voiced her support: “I wish Munich’s bid for the 2018 Olympic and Paralympic Winter Games every success. The support of a renowned company like BMW will increase the bid’s chances of success for sure. The Olympics are a very special experience for any sportsman or woman and the prospect of the Games taking place in your own country is incredibly exciting. I’m very pleased to be able to support the bid through my personal involvement.”

Profile of the BMW Group.
The company founded in 1916 as Bayerische Flugzeugwerke AG (BFW) grew into Bayerische Motoren Werke G.m.b.H. in 1917, before finally becoming Bayerische Motoren Werke Aktiengesellschaft (BMW AG) in 1918. Today the BMW Group is one of the world’s ten largest automotive manufacturers and owns three of the industry’s most powerful premium brands in BMW, MINI and Rolls-Royce. In addition, the company has carved out a strong position in the motorcycle market and is also a successful player in the financial services sector. The Number ONE strategy launched by the BMW Group in 2007 set the course for a successful future, committing the company to profitability and a long-term increase in value. The company’s activities remain clearly focused on the premium segments of the international car markets. Its strategic aims extend up to 2020 and paint a clear picture of the BMW Group as the world’s leading supplier of premium products and services for individual mobility.

Brief profile of the bid committee Munich 2018 GmbH.
Munich has teamed up with Garmisch-Partenkirchen and the Berchtesgadener Land region to bid for the XXIII Olympic and XII Paralympic Winter Games in 2018. The bid committee Munich 2018 GmbH, with its two Managing Directors Richard Adam and Bernhard Schwank, is tasked with looking after and coordinating all the responsibilities and interests connected with the bid. The partners in the bid committee are the DOSB with 51%, the city of Munich (30%), the State of Bavaria (9%), the Municipality of Garmisch-Partenkirchen (8%) and the District of Berchtesgadener Land (2%). Information on the concept, the progress of the bid and many other details can be found at Bewerbungsgesellschaft München 2018 GmbH.