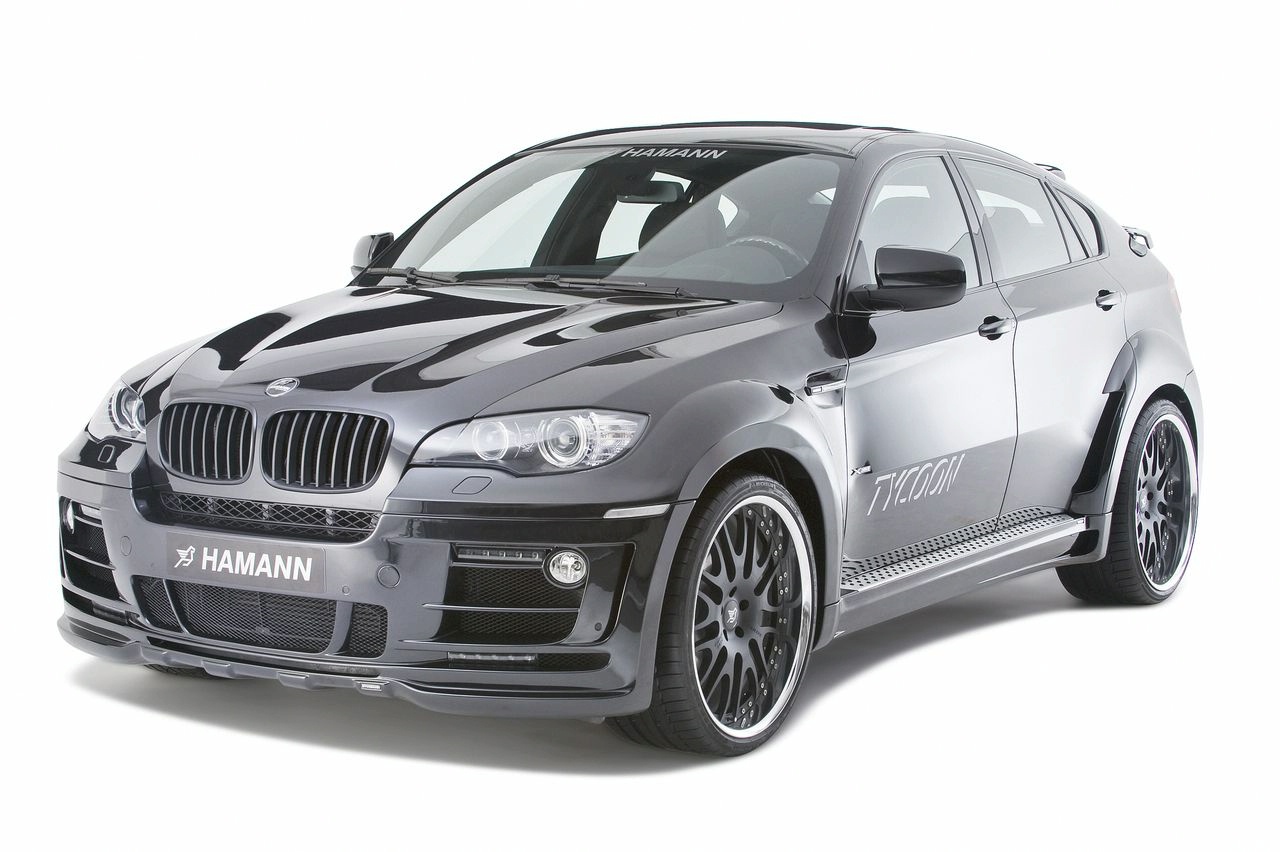 The german tuner Hamann has revealed the details on their latest tuned up BMW X6. Named Tycoon, the vehicle is a makeover of a series of Hamann X6 models that were revealed in 2008. To sweeten the deal, the new BMW X6 Tycoon features a new body elements, performance upgrades and an upgraded interior.

New front wings and rear wing extenders were made of  light composite materials and are emphasizing the masculine appearance of the X6 Tycoon. The wide of the body has been increased by 60 millimeters and the rear design was enhanced by adding a rear and roof spoiler. A three-part diffuser was added as well.

Aerodynamics played an important role in the design of the BMW X6 Tycoon and add the light forged wheels, and Hamann might be onto something. Hamann uses their Design Editio Race Anodized 23-inch rims and 315/325 tires. Special chassis springs enhance light alloys. Ride height is lowered by a maximum of 40mm both at the front and rear axles.

The high-end BMW X6, xDrive50i, has not been forgotten and Hamann is already working on a new performance kit that hopefully will bump the already impressive 407 hp coming from the 4.4 liter V8 twin-turbo engine.

As far as the latest project by HAMANN-Motorsport is concerned, the name says it all: the Laupheim-based refiner called its latest creation for BMW X6 TYCOON. This description has its roots in Japanese culture and is originally a synonym for an extraordinary shape – a comparison which can also be transferred to the X6-makeover.

The TYCOON – an auto-body pack which sets benchmarks

Already the design department at HAMANN-Motorsport ensures that the TYCOON meets the expectations in his name. They designed and developed an impressive broad makeover for this BMW crossover model and ensured that all accessories reflect and perfect the shape of the car. The masculine appearance of the TYCOON is mainly emphasised by its new front wings and back wing extensions made of light composite material. They broaden the body by striking 60 millimetres. The perfectly designed side skirts render the optical connection while the front apron is an outstanding eye-catcher with its large air inlets and the LED daytime running lights under the serial headlights. At the rear section of the X6, the HAMANN-engineers added a three-part diffuser to the original apron. The back appearance of the TYCOON is enhanced by a rear- and roof spoiler. It goes without saying that all used HAMANN-components do not only convince with their design but also with their aerodynamics. They ensure an optimised air flow over the car silhouette and render an additional downthrust.

The suitable rim for the broad makeover of the BMW X6 is the DESIGN EDITION RACE ANODIZED. The ultra-light forged wheel combines both agility and also elegance. The black rim star and the titanium bolting underline the dynamics of the wheel. The highly polished rim flange on the contrary gives the car a noble impression. HAMANN offers the 23-inch wheel with tyres sized 315/25 R 23. Special chassis springs fantastically enhance the light alloy wheels. Thereby, progressively coiled springs lower the barycentre of this Sports Utility Vehicle by maximally 40 millimetres at the front- and back axle.

The choice of different HAMANN performance kits is as manifold as the selection of BMW engines. The tuning expert bestows the X6 xDrive35i with an engine output of 360 hp / 265 kW at 5230 rpm. Parallelly, the maximum torque rises by 140 Nm to 540 Nm in the rpm-range between 1300 and 5000. At the same time, HAMANN also suspends the speed limit of 250 km/h and allows impressive 275 km/h.

The Diesel series also profits from extra power. After the serial motronic is re-programmed, the xDrive30d has 265 PS / 195 kW and transfers a maximum torque of 600 Nm to the crankshaft. The engine variation xDrive35d also turns into a racy sprinter: HAMANN is able to tease 320 PS / 235 KW and a sensational torque of 660 Nm at 2000 rpm out of the Diesel car. Engine performance kits for the xDrive50i are already in the final stages of the development process. Moreover, sport mufflers by HAMANN-Motorsport can be adjusted to any performance kit. The product range includes a two-pipe and also four-pipe exhaust system which render a sonorous and earthy sound.

The inner values of HAMANN – noble accessories for the TYCOON interior

In addition to the present, serial inner design, HAMANN offers accessories made of high-quality aluminium. Pedals and foot rests render motorsports sensations and perfectly match the 12-part HAMANN decoration set made of carbon fibre. An instrument dial with a scaling up to 300 km/h and a 3-spoke sport steering wheel further underline the sportive overall appearance of the TYCOON. For the boot of the X6, HAMANN offers an elegant and also practical boot mat with chequered decorative stitching and an embroidered logo.