after some pictures of the architecture of the BMW Welt it is time to show you some of the cars you can see in the BMW Welt. After this there will be another story with pictures from the BMW Museum, but this will take some time since I took so many pictures there of so many different cars, all deserving to be published here…

A 135i Coupé to start with, standing within the double-cone and very nice to look at in that colour.

You can see the carbon-fiber rear-diffusor and rear-spoiler on this picture as well, but I give you two more detailed fotos:

The next picture will show you the new BMW Performance rims and the new brakes underneath:

And now the interieur, also equipped with some nice carbon-fiber-parts:

I think thats enough of the 123d, we get to the next Diesel-car, the 330d Convertible, equipped with the M-sports-package here:

And for those of you who don’t like Diesel-engines that much but love the 3-Series Convertible, there is something very nice too:

And if you just don’t like convertibles, maybe you like SUVs more? Or should I say SACs, Sports Activity Coupés?

Oh, I see, the X6 just isn’t fast enough for you? Maybe this can help you: 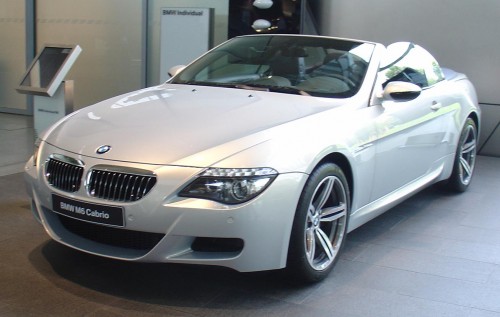 This thing is powered by this nice little powerplant, only a 2.4-litre but still good for almost 800 horsepower:

Very nice to see how small this engine is compared to the normal V8-engines found in the 5, 6 and 7-Series!

Four wheels are too much for you? Well, there are some motorbikes shown too. But of course the Welt is more about cars than about bikes…

That’s it for the moment, Museum-pictures still to come :-)

10 responses to “Cars currently shown in the BMW Welt”